PWDs out to make difference vs climate change 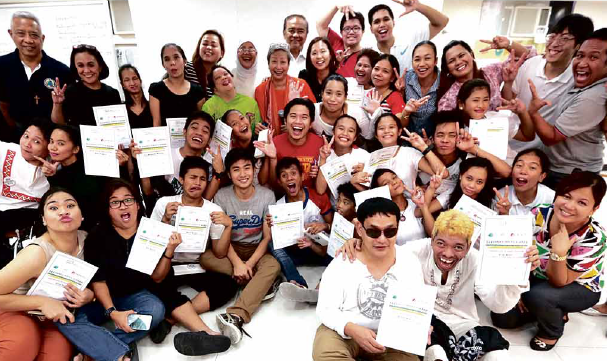 ARTSANDTECH FOR CLIMATE CHANGE Recent graduates of the first ever Unesco Techno Arts Camp for Climate Change show off their certificates after a performance showcasing their talents at the Boy Scouts of the Philippines building inManila. The camp taught the participants, some of them persons with disabilities and out-of-school youth, the importance of technology and arts in combating climate change. GRIG C. MONTEGRANDE

Nothing is too small to make a difference, even for a 38-year-old wheelchair-bound polio victim.

Edgar Sison, who has suffered from the devastating disease since he was 2, knows only too well that given the right tools, a selfless heart and a powerful vision, he can make the world a better place.

“Just as I discovered I can do cartwheels, sing, act and dance even in my wheelchair, the seemingly impossible problem of climate change can also be addressed,” Sison, a member of the Earthsavers Unesco Dream Center/Artists for Peace, said.

Sison works as an information technology professor at Systems Class Computer College and runs his own computer shop in Manila.

In 1998, Sison initiated a proper waste segregation system in his computer shop and urged his customers to do the same. He has also imposed a smoke-free policy.

“That’s basically the message of the camp. We are limitless. There’s a solution—no matter how small it is,” he said.

“As PWDs, we want to change the mindset that people should have pity on us. Instead of awa (mercy), we need more pang-unawa (understanding).”

The Earthsavers Ensemble tapped the expertise of the Seoul Institute of the Arts to teach the campers how arts and technology can be effective tools against climate change.

Cecile Guidote-Alvarez, Unesco Dream Center/Artists for Peace director and the brains behind the Techno Arts Camp, said the aim of the camp is to promote an “inclusive, transformative education of vulnerable groups… on confronting climate change and building disaster risk reduction mindset.”

The workshop participants included two deaf interpreters, two crippled, four blind and one suffering from Down syndrome. Tech-savvy students from Mapua Institute of Technology and Systems Technology Institute, SPED and ALS teachers as well as out-of-school youths were also drilled on how they can be a part of the solution to the problem.

“It was a good synergy,” said Alvarez.

At the end of the camp, the participants came up with an inclusive arts-media performance after learning the basics of information and communications technology (ICT), indie filmmaking, creative writing, comics making, singing, dancing, acting and even martial arts.

In a letter addressed during the Disability Rehabilitation Month last July, Unesco director general Irina Bokova said the camp “does not only empower the vulnerable youth with the opportunity to use technology creatively, but also give them the chance to acquire new skills and together, feel more integrated and confident.”

Alvarez said the PWDs and people from the vulnerable groups in society are a clear testament that change is possible.

“You should walk the talk. We have a blessed Magna Carta for persons with disabilities. There’s a signed UN convention for the rights of people with disabilities, but truth is, many PWDs are still suffering and they are not yet fully integrated in society. They are smart but are still unemployed,” she said.

During the camp, the physically handicapped worked with students and teachers, and even the financially handicapped and other vulnerable groups to enhance their social interaction, Alvarez said.

SPED teacher Gezyl Ramos of P. Gomez Elementary School said if PWDs can make a difference, how much more those born without disabilities.

“If the disabled can promote love for the environment, why can’t we?” she said.

Aside from applying ICT in teaching, Ramos said the workshop has also inspired her to become an effective K-12 teacher.

“It should always be interactive teaching by example,” Ramos said, who learned to integrate dancing, singing and other proper voicing techniques in her lessons.

Being equipped with new tools makes her more confident as a teacher, she said.

With research, she said, she will instill in her students the effects of deforestation and improper garbage disposal in climate change.

Like Ramos, Bave Mejares, teacher at Bayanan Elementary School in Cavite, also saw the usefulness of technology in promoting ALS.

Many of his students are past their prime and can no longer follow simple teaching, especially since 50 percent of the grading requirements in ALS are through essay writing.

With the use of video clips, students can easily grasp the lesson, react and learn.

The camp taught 20-year-old Mapua Insitute of Technology student Robert Carlo Cruz the importance of technology in bridging the gap between the privileged and underprivileged.

Through their film “Gising,” the group was shown how simple things such as wasting paper, improper waste disposal and cigarette smoking can lead to calamities and tragedies.

Cruz said the out-of-school youth he worked with are talented but lacked the opportunity, tools and technology.

“It was their first time to hold a camera but we were all surprised they know proper angling. They have good concepts as well,” he said.

For Averian Jamias, 19, also from Mapua, the biggest hindrance to change is the “I can’t do” mindset.

“Negativity closes doors; fears deprive people from reaching their potentials. Nothing happens if we are close-minded,” he said.

“Because of the camp, I learned I can, and even more, that I am good at certain things. We may be limited now but with the collaboration of efforts and unity in advocacy, we can do it,” he said.

Julio Jeremy Macrohon of Mapua left with a memorable lesson to impart to his fellow students back in school: Even small people can do a big change; a single step can spark a big movement.

“But the biggest hindrance [to any possible change] will always be ourselves,” he said.

Coding: A new language for PWDs

Did you know: Cecile Guidote-Alvarez’s birthday