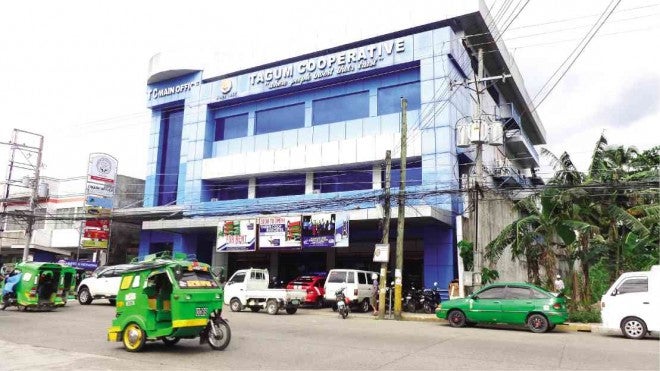 Whenever she needed extra cash for her “balut” (boiled duck egg) business, Ritchelle Sapal would borrow from a glib Indian man who goes around the neighborhood in Tagum City on a motorcycle.

The thickly bearded man in a turban, which most locals derisively refer to as “Bombay,” has become the image of notoriety for an usurious loan scheme called “five-six” (P6 return for every P5 borrowed).

“Yes, it costs much to borrow from him, but for small-time vendors like me, the Bombay seemed the easy way to obtain capital. No collateral, no documents to fill out,” said Sapal, 33, who sells balut on a small table along Roxas Street in downtown Tagum. She is charged up to 20-percent interest a month.

Not just a dev’t footnote

Sapal, along with thousands of others who thrive in the city’s small-scale and often informal business sector, has been at the mercy of enterprising lenders, and, sometimes, loan sharks.

So when a patron told her that Tagum Cooperative would help her find capital with easy terms, the woman felt unshackled.

For almost 50 years now, Tagum Cooperative has been a partner in community development and people empowerment, and in poverty reduction in Mindanao, said Norma Pereyras, president of the board of directors, the cooperative’s policy-maker.

“We’re not just a footnote in development,” Pereyras said. The driving force has been financial independence to members, she stressed.

As of August, the cooperative’s total assets reached P3.2 billion and its membership numbered some 119,000. The organization has come a long way since 1967, when 38 individuals banded together and contributed P80 each as share capital to form Holy Name Society of Tagum Parish.

Good governance and transparency are the mantra of Tagum Cooperative, helping the financial institution weather financial and economic storms throughout its 48-year history, and ensuring members’ support and confidence, said Pereyras, who has been with the organization for over 25 years.

“Our members are given assurance that their money is being managed properly. When they deposit with us, we take good care of their money so they’re assured they can withdraw it anytime they want,” she said.

When Pereyras joined the cooperative, the savings and loan institution was in the midst of a financial and managerial maelstrom. Loan delinquency soared; unbridled borrowing by its officers was rampant.

The cooperative was on the brink of collapse. “We had to do drastic measures. We introduced transformation and cleansing. We had to save the cooperative from suffering the same fate as other erstwhile successful cooperatives in the region that had gone bust due to mismanagement,” Pereyras said.

Tight internal control did the trick in keeping officials’ borrowing in check, while the cooperative introduced a module on financial counseling and family budgeting for members.

“We really need to inculcate in the minds of the members their obligation to pay their loans promptly so others may also enjoy its services,” said Pereyras, the first woman head of Tagum Cooperative’s seven-member board.

The reforms soon paid off. The cooperative’s bad loans were slashed to 7.9 percent of receivables by August, while its loan portfolio skyrocketed to P2.7 billion, said accountant Juris Perez, the general manager.

The members’ current contribution is at P1.4 billion, making Tagum Cooperative the second largest in Mindanao and seventh throughout the country.

The cooperative aims to increase membership to 130,000 next year and reach 200,000 five years hence, Perez said.

“What’s amazing is that we do not have external borrowings. Our total assets are wholly members-owned. They believe in us. They believe their hard-earned money entrusted to us is in good hands. We have to keep it that way,” Pereyras said.

As part of its holistic approach to human development, Tagum Cooperative has embarked on various programs and projects that reach out even to nonmembers.

The cooperative owns a 5-hectare property in Davao del Norte for tree growing.

Among its community projects is the propagation of financial literacy to marginalized sectors, like Sapal and other small-time business owners, tricycle drivers, children and the youth.

“In fact, we have 50,000 child-members who have a total deposit of P58 million,” Pereyras said. The saving advocacy in schools is a partnership between the cooperative and the Department of Education.

“Schoolchildren are taught the value of financial literacy at a young age,” the cooperative president said. On the other hand, parents, especially mothers, are taught livelihood skills and entrepreneurship.

Sapal and her mother were among the members of Savings and Credit with Education, who were given financial education and livelihood training “to earn, save and help augment family income.”

At least 68 percent of income surplus goes back to members in the form of patronage refund and dividend, with interest on share capital yielding a yearly average of 12 percent for several years now.

“We uplift the well-being of each member so he/she could have an improved quality of life,” Pereyras said.