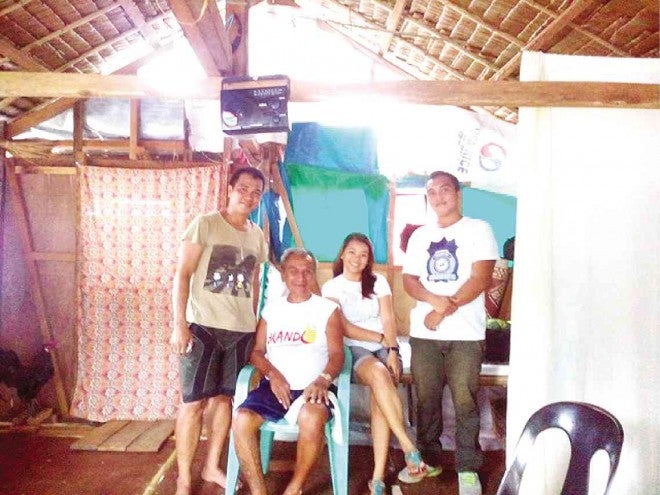 Rey Peñaranda, together with his ailing father, Santiago, and children Reymund and Cristine inside their newly repaired house made of light materials in Pampango District. The family, however, continues to live in a bunkhouse. JOEY GABIETA

Rey Peñaranda sees himself in a situation of discomfort: He and his family have been living in a bunkhouse for 19 months since their house was destroyed by a storm surge whipped up by monster Supertyphoon “Yolanda” (international name: Haiyan), while he continues to work for the top government agency tasked with helping the homeless survivors.

“This is life,” Peñaranda, 43, an employee of the Department of Social Welfare and Development (DSWD) and father of five children, said ungrudgingly.

Peñaranda, his wife Emma, 43, and their children, as well as his parents, Santiago and Catalina, both 69, survived the giant waves that swept away their house in Barangay 31 in Pampango District, Tacloban City, on Nov. 8, 2013. But they lost 11 of their relatives.

A day before Yolanda, the world’s strongest typhoon in recent history to make landfall, struck, the family sought shelter at Rizal Central School. But Peñaranda had to stay in his office because he was part of the DSWD disaster response team.

When the fury of the storm subsided, he went to the school to check on his family but returned to his office an hour later to perform his task to help distribute relief goods to the survivors.

Now, Peñaranda’s family and his parents are staying in separate bunkhouses, each with a floor area of just 8.64 square meters, in the city’s Caibaan District. “There is no privacy,” he said.

After work, he goes home and prefers to stay inside most of the time to avoid neighbors who might ask why his family is still there despite his DSWD employment. The government promised to transfer them to another dwelling, which looks like a nipa hut made of plywood, galvanized iron sheets and coconut lumber. They were to stay at the temporary shelter while waiting for a permanent house in a final relocation site.

Nothing has happened since the Peñarandas occupied the bunkhouse in March 2014.

The National Housing Authority has planned to build 14,000 housing units for the survivors, but only more than 2,000 have been finished or are in varying stages of construction. The delay was attributed to land development problems, since the relocation site in hilly areas had no roads and proper drainage, power and water lines.

Another daughter, Emy, 22, has a job, while eldest son, Reymund, 23, is reviewing for the board exams on Criminology. Two other sons, Krez and Rey Jr., are in third year college and Grade 10, respectively.

“Despite our hardship, I want them all to finish their studies. I don’t really care if I have to borrow money from my co-employees just to make sure they will reach their dreams,” said Peñaranda, a high school graduate who once dreamt of becoming a policeman. “I want all my children to have a better future,” he said.

Cristine said her father had become their source of strength and vowed to help the family once she finds a better job.

Peñaranda’s immediate boss, Orvill Berino, who heads the administrative unit of the DSWD regional office, is proud of him as an employee and a family man. “He does his tasks without any complaint and finishes these. He is not shy in seeking loans for his family. He also pays his debts,” Berino said.

Peñaranda receives a monthly pay of P9,000 as administrative aide I but takes home only P6,000 after taxes and Government Service Insurance System contributions are deducted. He ends up receiving only P1,000 after paying off some loans.

An only son, he also gives to his sickly parents, who have no steady income of their own. His father is recovering from a stroke he suffered in 2012, while his mother sells native delicacies in the neighborhood.

Peñaranda has started repairing his small house for his parents in Pampango, where the air is fresher.

He is still clinging to hopes for a permanent shelter from the government. As to when it will be awarded, he does not know, but he is willing to wait.
RELATED STORIES

Tupas hits back at DSWD, seeks probe for Yolanda anomalies