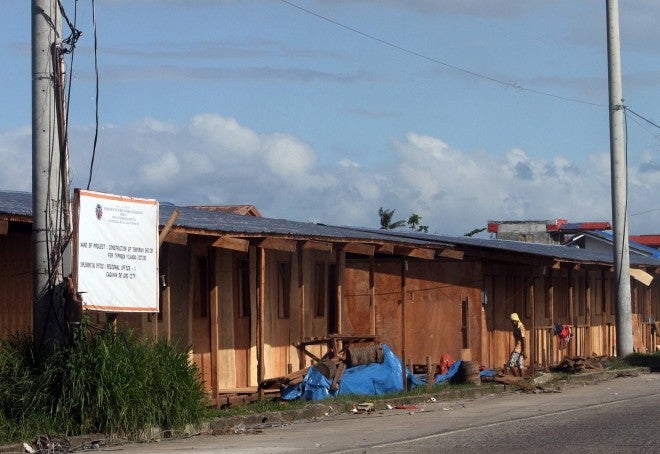 The bunkhouses built for survivors of Supertyphoon Yolanda rob the residents of their privacy and dignity and expose them to different abuses according to a report by the United Nations. INQUIRER FILE PHOTO

MANILA–The Philippines has not done enough to rebuild after Supertyphoon “Yolanda” (international name: Haiyan), as thousands remain in shanties without power or water for nearly two years, a United Nations representative said Saturday.

Many storm survivors in the central region have had to endure relocating to evacuation camps up to three times since Haiyan struck in 2013, and the sub-standard housing leaves them vulnerable to future typhoons, said Chaloka Beyani, UN special rapporteur on the human rights of internally displaced persons.

“While the government is to be commended in terms of its immediate responses, its attention to ensuring sustainable durable solutions for IDPs (internally displaced persons) remains inadequate to date,” Beyani said in a statement posted on the UN website.

Beyani was in the Philippines from in late July to check on the government’s handling of people displaced by Haiyan and by fighting between the military and Muslim rebels in the south.

The box-like shanties also rob the storm survivors of their “privacy and dignity” as they struggle to rebuild their lives, he said.

Yolanda, the most powerful storm ever recorded to hit land, wiped out entire communities and left 7,350 dead or missing when it struck the impoverished central islands in November 2013.

The government aims to move 70 percent of the 2,000 into permanent concrete homes by year-end, she said.

READ: Gov’t too slow? ‘Yolanda’ victims rebuilding on their own

“We are aware of the need to fast-track the permanent shelters, but there are constraints,” Soliman told Agence France-Presse.

Soliman said the lack of power and running water in some areas was due to local governments’ unpaid utility bills.

An increase in land prices also delayed the construction of permanent homes as land owners cashed in on government demand, she said.

President Benigno Aquino III has budgeted 160 billion pesos ($3.6 billion) to rebuild after Yolanda, considered as one of the major tests of his six-year term that will end in June next year.

The Philippines is one of the world’s most disaster-prone countries, at risk from earthquakes, volcanic eruptions and an average 20 typhoons yearly.