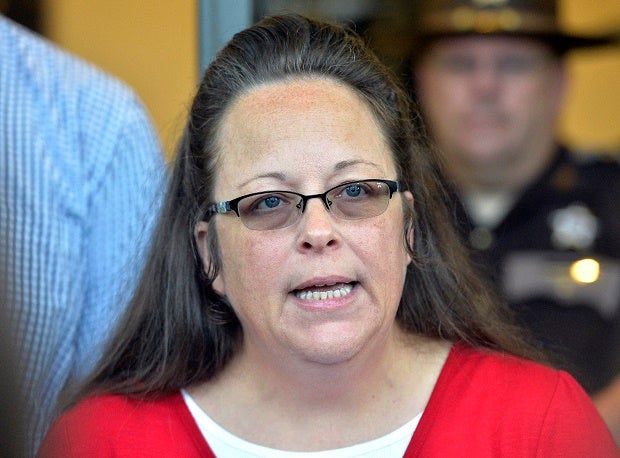 In this Sept. 14, 2015 file photo, Rowan County Clerk Kim Davis makes a statement to the media at the front door of the Rowan County Judicial Center in Morehead, Ky. Davis, who refused to issue marriage licenses to same-sex couples, says she met briefly with the pope during his historic visit to the United States. Vatican officials did not respond to an email asking for comment early Wednesday, Sept. 30. AP FILE PHOTO

READ: Clerk who rejected licenses for gays says she met with pope

The Vatican newspaper, L’Osservatore Romano, said their encounter in Washington last Thursday was private. Out of deference to the Vatican, Davis’ attorney, Mat Staver, would not say how it was arranged. The Vatican essentially confirmed it, without further comment.

Davis said she grasped the pope’s outstretched hand, and he told her to “stay strong.”

Davis refused to issue any marriage licenses in Rowan County, Kentucky rather than comply with the Supreme Court ruling that effectively legalized gay marriage nationwide. She served five days in jail rather than resign. Some of her deputies now issue licenses without her authority, and she claims they are invalid.

“Just knowing that the pope is on track with what we’re doing and agreeing, you know, it kind of validates everything,” Davis told ABC News.

But Vatican observers say that’s reading too much into the visit.

“You can’t take his presence with somebody as his affirmation of everything that they stand for,” said Cathleen Kaveny, a theologian and legal scholar at Boston College. “He thanked her for her courage and told her to stay strong. That’s a commitment to her voice in the conversation. I don’t think it’s necessarily commitment to her policy views.”

Francis, whose visit ended Sunday, largely steered clear of divisive culture war issues, telling the US bishops to avoid “harsh and divisive” language despite the challenges they face in society.

From the start of his six-day tour, Francis encouraged Americans to preserve religious freedom. At the White House, he said “American Catholics are committed to building a society which is truly tolerant and inclusive,” then said “they are likewise concerned that efforts to build a just and wisely ordered society respect their deepest concerns and their right to religious liberty.”

Religious freedom, Francis said, is “one of America’s most precious possessions.”

Still, with much ground to cover during his first US trip, Francis listed the issue as one among many, including concerns about immigrants, climate change, the plight of workers, the death penalty and war. By reaching above and beyond America’s usual political and social divides, Francis raised questions about whether he prioritizes objections to gay marriage and other laws as much as US bishops do.

The pope also had a private meeting with the Little Sisters of the Poor, a religious order that, along with dozens of dioceses, is suing President Barack Obama over the birth control requirement in the Affordable Care Act, arguing that an exemption for religious objectors is too narrow.

Both meetings help “refute the mistaken idea that the pope was somehow trying to put distance between himself and the current, on-the-ground religious freedom controversies and challenges that the American bishops and others are facing,” said Rick Garnett, a University of Notre Dame law professor who specializes in religious freedom.

Davis, who is Apostolic Christian, and her husband were called to the Vatican Embassy on Thursday. They met with the pope for less than 15 minutes, but left inspired as the pope thanked her for her courage and told her to “stay strong,” Staver said.

That’s puzzling to Francis DeBernardo, who runs the New Ways Ministry, which seeks acceptance for gay, lesbian, bisexual and transgender Catholics. The pope had turned away a crush of advocacy groups lobbying to see him, and held only a few private meetings, with groups including Catholic schools and heads of Catholic nonprofits. That he carved out even a few minutes in his event-packed schedule for Davis was noteworthy.

“It throws a wet blanket on the goodwill that the pontiff had garnered during his US visit last week,” DeBernardo said.

Throughout his papacy, Francis has insisted that marriage is between a man and woman, but he didn’t emphasize this church teaching during his trip because he wanted to offer a “positive” message about families to America, Lombardi told reporters.

Two years ago, Francis said “Who am I to judge?” when asked about a supposedly gay priest, but he has also affirmed marriage is between a man and woman. He didn’t emphasize church teaching on marriage during this trip because he wanted to offer a “positive” message about families to America, the Rev. Federico Lombardi, the Vatican spokesman, told reporters.

While flying back to Rome last Sunday, reporters urged Francis to clarify his position on the religious freedoms of government officials. Without mentioning Davis, the pope said, “I can’t have in mind all cases” but called conscientious objection a human right.

“And if a person does not allow others to be a conscientious objector, he denies a right,” Francis said.

Jailed clerk: No backing down on opposing same-sex marriage