Jailed clerk: No backing down on opposing same-sex marriage 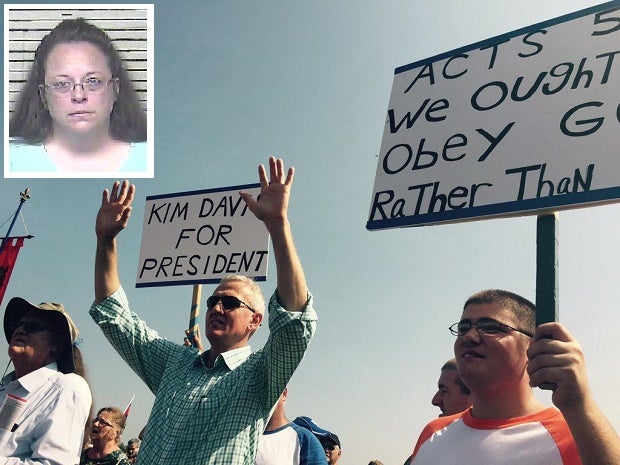 Supporters of Rowan County Clerk Kim Davis (inset) hold up signs in support of her, outside the Carter County Detention Center, Saturday, September 5, 2015, in Grayson, Kentucky. Since the U.S. Supreme Court legalized gay marriage in June, the vast majority of officials have abided by that ruling. However, Davis stopped issuing marriage licenses to any couple, gay or straight, in defiance of a federal court order, and was sent to jail on Thursday. AP

GRAYSON, Kentucky, United States — The Kentucky clerk who refuses to give marriage licenses to gay couples is spending her Labor Day holiday in isolation at a jail with her Bible.

Deputies in Rowan County Clerk Kim Davis’ office issued licenses to three same-sex couples on Friday under threat of jail time or fines if they didn’t comply with a federal judge’s order. But the drama surrounding Davis does not appear to be ending anytime soon. Davis told her attorneys Friday that she would “never violate her conscience or betray her God.”

Around 300 of her supporters rallied Saturday, chanting outside the jail house, “Thank you, Kim” and praying that she could hear them. They called her a Christian hero in a war against the godless and waved signs that read “no to sodomite perversion.”

“She won’t bow, I promise you,” Davis’ husband, Joe, told the crowd.

Since the U.S. Supreme Court legalized gay marriage in June, the vast majority of officials have abided by that ruling. Davis and a few other clerks and judges stopped issuing marriage licenses to any couple, gay or straight. Davis was the first to be challenged in court.

A U.S. District judge has said he will not release Davis unless she agrees to obey his order. Davis’ attorneys said the only way she would relent would be to change state law so that marriage licenses are not issued under the authority of the county clerk. They claim the licenses that were issued to same-sex couples were not valid.

The state legislature will not meet again until January. Davis could potentially be in jail for months.

“She’s not going to resign, she’s not going to sacrifice her conscience, so she’s doing what Martin Luther King Jr. wrote about in his Letter from the Birmingham Jail, which is to pay the consequences for her decision,” said Mat Staver, one of Davis’ attorneys.

Gay couples who received licenses said they were sad that Davis was in jail. But they were determined not to let her ruin their celebrations. CB