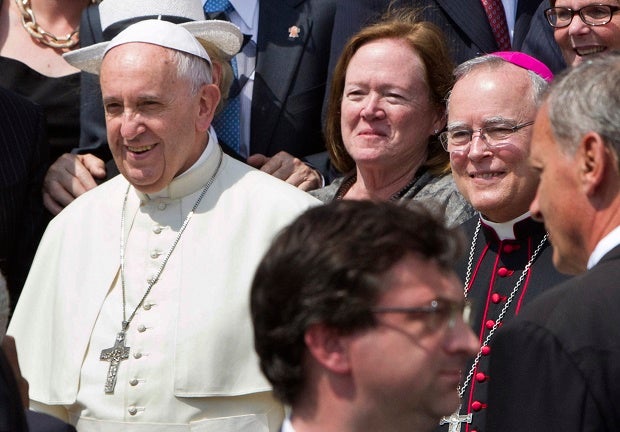 In this Wednesday, June 24, 2015 file photo, Philadelphia’s Archbishop Charles Chaput, right, stands next to Pope Francis as they pose for a photo with a delegation from Philadelphia at the end of the pontiff’s weekly general audience in St. Peter’s Square at the Vatican. Pope Francis will be traveling to Philadelphia in September to attend the World Meeting of Families. Chaput, the meeting’s host, is moving to limit lesbian, gay, bisexual and transgender Roman Catholics as they try to lobby for a broader role in the event. AP

PHILADELPHIA — A Roman Catholic teacher fired over her same-sex marriage says she has been invited to the White House to help welcome Pope Francis.

Margie Winters said Monday she hopes the pontiff will address issues facing gay Catholics during his visit to the US this week.

The 50-year-old Winters says she lost her job this year at a private Catholic grade school outside Philadelphia over her 2007 same-sex marriage.

Thousands of people from diverse social and religious backgrounds are expected to attend the welcoming ceremony Wednesday on the South Lawn.

Winters hopes to get a chance to speak to the pope. She would ask him to extend his message of inclusion to gay, lesbian, bisexual and transgender Catholics.

She says her invitation came through the Human Rights Campaign, an LGBT advocacy group.

Read Next
Greenpeace to file raps vs top oil, cement firms for pollution
EDITORS' PICK
Palace doesn’t see tension in WPS, only Duterte haters incite it
Re-imagining EdTech and the classroom in a post-pandemic era
A Spanish Celebracion with Crimson Mactan’s ‘Enye at Home’
CopperMask Philippines shows support for Miss Universe Philippines 2020 Rabiya Mateo
Retired military, police execs call for unity vs China aggression
As vaccine injection rate rises in PH, questions linger on how long it would take to reach herd immunity
MOST READ
Mexico wins Miss Universe title but Myanmar steals show
‘Check your facts:’ Trillanes disputes Enrile claims on 2012 back-channel talks with China
Pangilinan on China’s threat if PH digs oil in WPS: Why should we be scared?
Retired military, police execs call for unity vs China aggression
Don't miss out on the latest news and information.