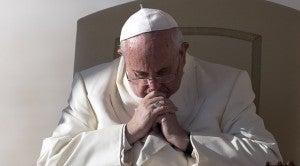 Pope Francis listens to a speaker delivering his message translated in different languages during his weekly general audience in St. Peter’s Square at the Vatican, Wednesday, Dec. 11, 2013. AP FILE PHOTO

ROME – Pope Francis has called for a rethink in the way the Catholic Church deals with the children of gay couples and divorced parents, warning against “administering a vaccine against faith.”

“On an educational level, gay unions raise challenges for us today which for us are sometimes difficult to understand,” Francis said in a speech to the Catholic Union of Superiors General in November, extracts of which were published on Italian media websites on Saturday.

“The number of children in schools whose parents have separated is very high,” he said, adding that family make-ups were also changing.

“I remember a case in which a sad little girl confessed to her teacher: ‘my mother’s girlfriend doesn’t love me,'” he was quoted as saying.

The pontiff said educational leaders should ask themselves “how can we proclaim Christ to a generation that is changing?”

“We must be careful not to administer a vaccine against faith to them,” the 77-year-old added.

Though the Church has often been in conflict with the lesbian, gay, bisexual and transgender community over its opposition to same-sex marriage and to homosexuality, Francis has drawn praise for attempts to be inclusive.

In July he reached out to gays, declaring that “if someone is gay and seeks the Lord with good will, who am I to judge?”

And in December, the Advocate magazine – dedicated to the gay and lesbian community – chose the head of the Catholic Church as the “single most influential person of 2013 on the lives of LGBT people.”

The reform-minded pontiff has also called an extraordinary assembly of the Synod of Bishops next year to discuss the Church’s position with regard to the family, which is expected to address among other issues the problem of divorcees remarrying and children of divorced parents.