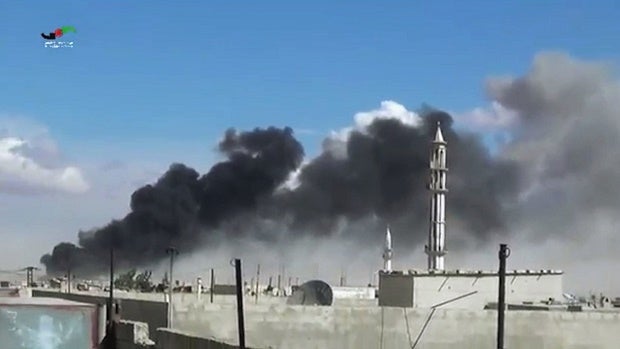 In this image made from video provided by Homs Media Centre, which has been verified and is consistent with other AP reporting, smoke rises after airstrikes by military jets in Talbiseh of the Homs province, western Syria, Wednesday, Sept. 30, 2015. Russian military jets carried out airstrikes in Syria for the first time on Wednesday, targeting what Moscow said were ISIS positions. US officials and others cast doubt on that claim, saying the Russians appeared to be attacking opposition groups fighting Syrian government forces. AP

MOSCOW, Russia—Russia launched air strikes in war-torn Syria on Wednesday, its first military engagement outside the former Soviet Union since the occupation of Afghanistan in 1979.

Russian warplanes carried out strikes in several provinces along with Syrian government aircraft as President Vladimir Putin seeks to steal US President Barack Obama’s thunder by pushing a rival plan to defeat the Islamic State of Iraq and Syria (ISIS) group in Syria.

Both Moscow and Damascus presented the operation as targeting ISIS militants, with a Syrian security source saying “terrorist positions” were hit in Hama and Homs provinces, and that Russia aided government air strikes in Latakia province, the regime’s stronghold.

But the United States said it believed Russia had targeted the opposition rebels threatening Syria’s embattled leader Bashar al-Assad— not ISIS as claimed.

A US defense official in Washington briefed journalists that: “We have not seen any strikes against ISIL (ISIS), what we have seen is strikes against (the) Syrian opposition.”

Defense Secretary Ash Carter was more cautious, saying: “It does appear they were in areas where there were probably not ISIL forces.”

But he blasted Russia’s arrival in the bloody civil war, saying it only served to prolong the conflict and would “backfire.”

France—which on Sunday launched its first air strike against ISIS in Syria—also raised doubts over Russia’s objectives, echoing concerns that Moscow’s military build-up in the country aims simply to keep Assad in power.

Western powers consider Assad’s military responsible for the vast majority of the 240,000 deaths in the four-year war, and say his presence makes a political settlement impossible. France this week launched a probe into Assad’s regime for crimes against humanity.

Russia meanwhile is pushing for foreign countries to join an intelligence task force Moscow is setting up with Iran, Iraq and Syria, arguing that supporting the Syrian government is the only way to defeat ISIS.

Putin, who obtained parliamentary permission to use force abroad just hours before the strikes, warned that Moscow would hunt down ISIS militants before they target Russia.

The Russian leader pledged his country would not get sucked into a protracted military campaign. His chief of staff Sergei Ivanov said the operation would be limited in duration and ruled out ground operations by Russian troops.

He also said that Assad should be ready for compromise with the opposition, “for the sake of his country and his people.”

Russia’s next move, later Wednesday, will be to present a draft resolution to the United Nations Security Council on countering terrorism and fighting ISIS.

Washington was given advance warning of the Russian strikes—in line with an agreement to “deconflict” the situation in Syria, which means working to ensure coalition and Russian planes do not inadvertently cross paths.

However Russia only gave an hour’s warning and did not specify where the strikes would occur, riling many in the Pentagon who had been hoping for clearer lines of communication.

“I’m especially concerned because there has been no real effort by the Russian side to deconflict the Russian air strikes in Syria,” he said.

Putin wants to muscle his way back onto the world stage after months of Western isolation following Russia’s seizure of Crimea from Ukraine and support for a separatist insurgency in the east of the ex-Soviet country.

But Washington is worried Moscow’s support for its Soviet-era ally may complicate the US-led coalition’s fight against ISIS extremists.

Secretary of State John Kerry told his Russian counterpart Sergei Lavrov that Moscow’s move “is not helpful to that effort,” a senior US official said.

Differences with the West

But many in Russia accused the Kremlin of short-sightedness.

Alexander Konovalov, head of the Strategic Analysis Institute, said Russia was guided by a desire to end its diplomatic isolation and may not fully realize the long-term consequences of a military involvement in the Middle East.

“We were going to Afghanistan for six months and stayed there for 10 years,” he told AFP, referring to a conflict that killed over 14,000 Soviet troops between 1979 and 1989.

Sixty-nine percent of Russians are against Moscow’s deployment of troops in Syria, with just 14 percent in favor, according to a recent poll by the Levada Center.

“Hide your sons,” one Russian, Zaira Abdullaeva, wrote on Facebook.