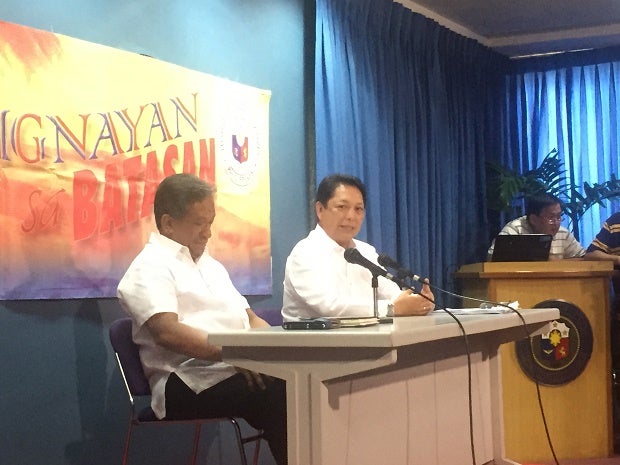 1-Bap Representative Silvestre Bello III, in a press conference at the House of Representatives Tuesday, said Carpio should inhibit himself from the case to avoid being a “suspect of partiality.”

Carpio is the chairman of the Senate Electoral Tribunal (SET) hearing the citizenship case filed by Rizalito David against Poe.

Carpio and Cruz founded one of the country’s most powerful law firms, CVC Law, also known as “The Firm.”

Roxas, who was earlier endorsed by President Benigno Aquino III as the administration’s standard-bearer, is running against Poe in 2016.

Bello said Carpio should inhibit “out of decency” because whatever his decision, it would be “suspect of partiality.”

“This is a very crucial issue because it involves a presidentiable,” Bello said.

During the oral arguments on Monday, Carpio said Poe is a naturalized Filipino and not a natural-born Filipino unless she could prove blood relations to Filipino parents.

The Associate Justice said that Poe, a foundling, whose biological parents are unknown, may be considered a Filipino citizen under international law but only with a “naturalized” status.

“As far as the LP is concerned, we believe that Senator Grace is a Filipino,” Erice said, adding that this is one factor why they supported Poe in her senatorial bid in 2013.

LP has been courting Poe to be Roxas’ vice president in 2016 until the neophyte senator declared her presidential ambition on September 16.

On the other hand, Nationalist People’s Coalition (NPC) acting president Giorgidi Aggabao said that he respects the opinion of Carpio, but the burden of proof should be on the complainant and not on Poe.

“The burden has to be with (Rizalito) David to establish and show that Poe is not a natural-born Filipino,” Aggabao said.

He said SET is a collective body and the opinion of Carpio is not the position of everyone.

Aggabao said Poe “on her own took the initiative” to settle her citizenship issue.

“She’s taking the risk,” he said, adding that Poe’s survey ratings would surge once her citizenship issue is settled. Nestor Corrales, INQUIRER.net/CDG