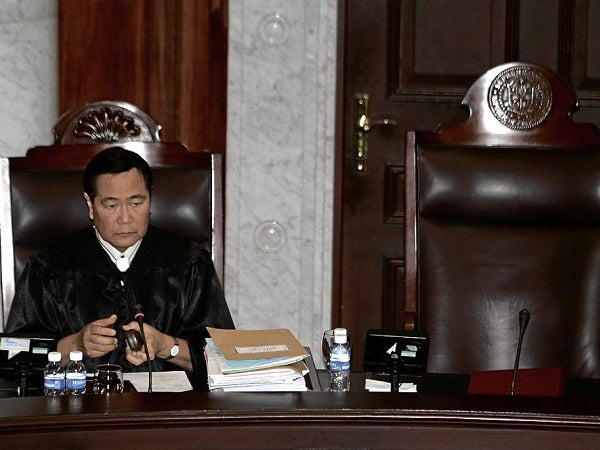 For the head of the Senate Electoral Tribunal (SET), Sen. Grace Poe is not a natural-born Filipino unless she can prove blood relations to biological Filipino parents.

Implying the presidential aspirant’s lack of qualification to hold public office, Supreme Court Associate Justice Antonio Carpio on Monday said Poe, a foundling whose biological parents are unknown, may be considered a Filipino citizen under international law but one with a “naturalized” status.

Poe has undergone DNA tests with possible relatives, her lawyer, George Garcia, told the SET during Monday’s oral arguments on the petition for her disqualification from the Senate brought by a losing opponent in the 2013 senatorial election.

Garcia told reporters after the proceedings that Carpio welcomed the information, calling it “wonderful” and saying “if proven correct, that will solve this case.”

He said the tests were done two weeks ago and the results would be released soon.

Poe told reporters that the tests for a match were done with “individuals” who had approached her on the possibility that they were related.

She said the individuals showed her a picture of a relative that suggested they were related.

Poe said the people involved were “possible siblings,” but she did not want to elaborate as to whether they were her siblings or siblings of her biological parents.

“What I can say is that if we are related by blood, I would be happy because they are decent and good people,” Poe said.

“They were very gentle when speaking, so I said to myself this could be it,” she said.

Under the Omnibus Election Code, only natural-born Filipino citizens may run for public office.

During Monday’s oral arguments on the disqualification case against Poe, Carpio made clear his stand on the senator’s citizenship, reconciling the provisions of international law—which confers foundlings with a nationality and protection against statelessness—and the provisions of the 1935 Constitution, under which Poe’s citizenship falls.

“There is a principle of international law that every state must avoid statelessness, and there is also a principle that every person has the right to acquire citizenship. Add this together, that is part of our law, because it does not contravene our Constitution … So we apply that here,” Carpio said in questioning Manuelito Luna, lawyer for petitioner Rizalito David, who lost the 2013 senatorial election that Poe topped.

Carpio said a country’s act of granting a passport to a foundling, for instance, was in compliance with these two international laws.

“We avoid statelessness, give the foundling citizenship. But it is under 5 (Section 5, Article 4 of the 1935 Constitution): that a foundling is a citizen, but naturalized. Because to be natural-born, you must show blood relationship,” Carpio said.

Section 5, Article 4, of the old Constitution classifies as citizens “those who are naturalized in accordance with law.”

The nationality of Poe, who was born in 1968 and was adopted in 1974 by the late movie actor Fernando Poe Jr. and his wife, actress Susan Roces, is covered by the 1935 law.

“So we have solved the problem, counsel? You will agree with me that Senator Poe is at least a citizen of the Philippines, but you’re saying she does not fall under (Sections) 3 or 4,” Carpio said, getting Luna to concur.

Throughout the proceedings, Luna asserted that Poe, as a foundling, was “stateless” and, thus, did not possess Filipino citizenship from the time she was born.

Her reacquisition of Filipino citizenship in 2006, some five years after becoming an American citizen, was thus invalid, as she did not possess Philippine nationality in the first place, Luna said.

Carpio explained that given the silence of local laws on how to regard the nationality of foundlings, international customary laws—the International Covenant on Civil and Political Rights for one—may be invoked.

“So if right now there is no law promulgated by Congress that foundlings can be deemed citizens of the Philippines, customary law can supply that gap, correct?” Carpio told Luna.

“If there is customary international law that says foundlings shall be deemed citizens of the country where they were found, we apply that here because under the incorporation clause, we adopt general principles of international law,” Carpio said.

Striking a balance between the Constitution and international law, Carpio said foundlings may indeed be granted citizenship, though only as far as Section 5: naturalized status.

Wrapping up his questioning of the petitioner’s camp, Carpio said that “any decision on citizenship is never final; it can always be questioned.”