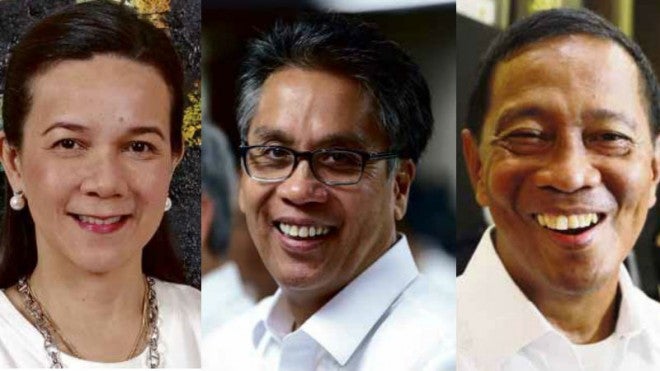 Sen. Grace Poe and former Interior Secretary Mar Roxas expressed elation over the results of the latest Social Weather Station (SWS) survey on presidential preference in which they gained more supporters, propelling them to the top and second spots, respectively.

Vice President Jejomar Binay, who came in third, thanked his “core” supporters for their continued trust, as he slammed Roxas for using government resources.

The SWS survey, conducted nationwide from Sept. 2 to 5, showed 47 percent of 1,200 respondents choosing Poe as among the best leaders to succeed President Aquino, 39 percent picking Roxas and 35 percent rooting for Binay.

The proportion of those who named Poe as among the best leaders to succeed Aquino increased by 5 points from 42 percent in June while Roxas’ rating rose 18 points from 21 percent. Binay’s rating barely changed from 34 percent.

The survey, which had a margin of error of plus-or-minus 3 percentage points, was conducted after Roxas declared last month his candidacy but before Poe announced her intention to run.

Poe announced her run for the presidency on Sept. 16 at the University of the Philippines Diliman in Quezon City.

Binay was the first to express his intention to run for President. His speech in which he attacked the Aquino administration at the July 1 launch of his political party, the United Nationalist Alliance, set the tone of his campaign.

In a statement, Poe thanked the people for their support and trust and said she was “humbled” that they “continue to appreciate our hard work and the brand of governance that we are upholding and pushing.”

“Our growing support from the people, as reflected in this survey, is an affirmation that what we have started is on the right track. It’s a validation that our agenda for transparency, efficiency and honesty resonate well with our people,” she said.

“As a public servant, I will continue to carry out our mandate and serve the people. Our people’s unwavering support remains an inspiration,” Poe also said.

Interviewed by reporters, Poe said maintaining the lead in the surveys would be a “challenge” but she said she was focused on doing her work and praying for “wisdom and courage.”

“And at that time people were not sure I was running and it helped that I have made an announcement,” she said.

Roxas, the standard-bearer of the ruling Liberal Party (LP), said the preparations for the presidential race had only just begun.

Anointed by Aquino to succeed him two months ago, Roxas said in a statement: “I am very thankful for the support of our countrymen. The entire ‘daang matuwid’ (straight path) coalition is elated by the surge in our numbers in the most recent SWS survey.”

“We see our increased numbers in this survey as an expression of faith in our capability to care for our families, our collective future and the dreams of our countrymen,” he added.

He said his spurt in the survey, which saw him leapfrogging over his political archrival, Binay, for the first time, also showed that “as time passes, more and more Filipinos are recognizing the excellent beginnings we have made along the straight path and are expressing their desire to maintain our trajectory.”

“We are confident that even more of our people will be able to discern true election issues from mere mudslinging,” he said. 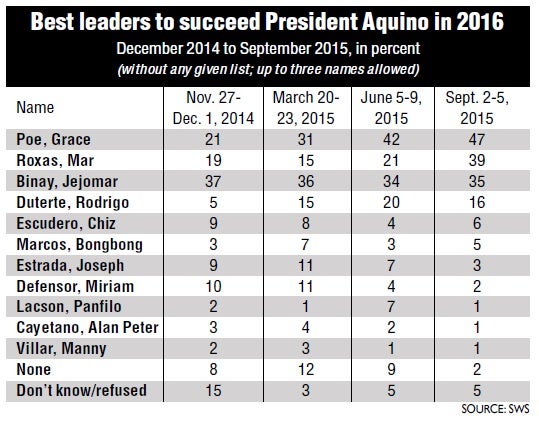 Asked in an interview if he was alarmed by the results, Binay said: “Assuming it’s correct, it’s a wake-up call, a challenge to work harder further.”

He said he heard Roxas had many ads and that this was the effect of the latter’s numbers jumping.

On a morning television show, Binay said the kind of questions in a survey would have a big influence on the results.

He said the SWS survey—in asking respondents to pick three candidates deemed best to succeed Aquino—seemed to “corner” the choices.

“You get trapped in the results,” he said.