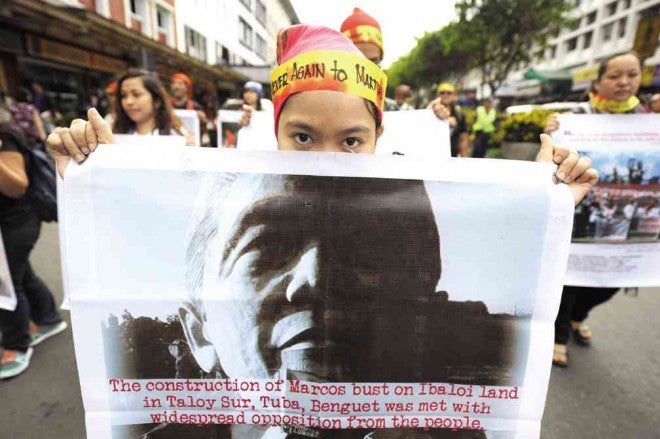 MARTIAL LAW REVISITED Around 50 activists marched in downtown Baguio on Monday to revisit the atrocities committed during martial law. Since the ouster of the late strongman Ferdinand Marcos, the monuments to his rule, including a giant bust along Marcos Highway, have been destroyed. EV ESPIRITU/INQUIRER NORTHERN LUZON

“We can trace the origin of the killings with impunity to the Marcos dictatorship’s having abetted the brutal ways by which paramilitary groups freely carried out political killings and other human rights violations,” Ocampo said in a keynote speech during the 5th Congress of the Cordillera Human Rights Alliance (CHRA).

Paramilitary groups were a phenomenon which Marcos’ successors, beginning with the late President Corazon Aquino, had failed to cure, Ocampo said.

“After Marcos’ ouster and Cory’s (Aquino) ascent to the presidency, there was a strong public clamor to dismantle the Cafgu (Citizen Armed Forces Geographical Units) and other paramilitary groups,” he said.

“Rather than heed the clamor —by whoever’s advice [which] we ought to find out—she legitimized the Cafgu by issuing Executive Order No. 264, placing them under [the supervision of the] Armed Forces of the Philippines,” Ocampo said.

The net effect of Aquino’s decision to retain Cafgus, he said, was to “enable the martial law mind-set to prevail in her administration and thereafter.”

Ocampo said the revolutionary government spawned by the 1986 People Power Revolution, and the restored government led by Aquino, also failed to cleanse the AFP of Marcos’ influence when she did not order a “top-down roster review” to identify, prosecute or weed out corrupt officers and those involved in gross human rights violations.

The Commission on Human Rights and various international human rights organizations have identified the Cafgus and the militias as “notorious human rights violators” in the course of Aquino’s six-year term and the administrations of subsequent presidents, including her son, incumbent President Aquino, he said.

“It is about time we let this ugly truth out for good measure,” Ocampo said, now that the killings in Mindanao are being waged by militias and indigenous Filipinos who compose paramilitary groups.

“Although these groups exist separately from the Cafgu, the Special Civilian Armed Auxiliary and the Investment Defense Force, they nevertheless serve as the AFP’s force multiplier in its counterinsurgency campaign and as protectors of big business intruding into the lands of peasants and indigenous peoples,” he said, quoting a report from the rights group, Karapatan.

Ocampo said: “In 2015, per Karapatan’s reckoning, there has been an uptick in extrajudicial and political killings. In the first half of the year, 33 were summarily killed—an average of one to two [murders] per week. As of this month, the total number of political killings has exceeded 780 under President Aquino’s watch.”

The Catholic Bishops’ Conference of the Philippines, in a Sept. 13 statement, asked the Aquino administration to conduct “an honest, thorough, impartial and speedy investigation [of the Surigao del Sur killings] so the guilty may be held to account.”

“It troubled the bishops that the paramilitary groups, which the government uses for counterinsurgency operations, do not fall under a clear established and accessible chain of command,” unlike the “regular channels of accountability” governing the actions of the police and the military, Ocampo said.

On Monday, CHRA and members of the Cordillera Peoples Alliance staged a rally along downtown Baguio to condemn the atrocities attributed to martial law. Vincent Cabreza with a report from Kimberlie Quitasol, Inquirer Northern Luzon