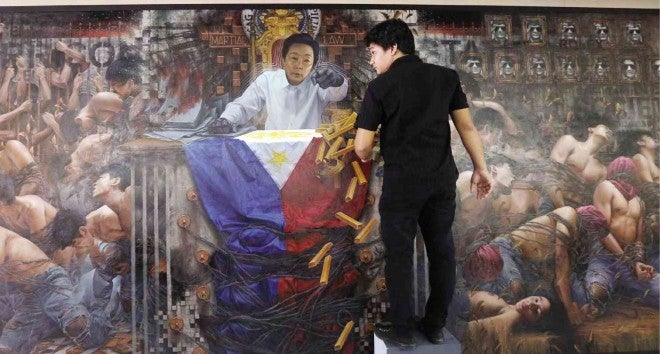 FACE-TO-FACE WITH MARTIAL LAW MEMORIES Authoritarian President Ferdinand Marcos seems to be confronting young Batanes artist Randalf Dilla in this mural titled “Salvaged Memories, Salvaged Lives.” The oil and acrylic mural was commissioned by Hiraya Gallery to remind Filipinos of the horrors of martial law. It is part of the exhibit “Tyranny of Hindsight,” which opens on Sept. 23 in connection with the 43rd anniversary of the declaration of martial rule. Dilla, 28, was not yet born at the time, but assiduous research gave him enough insight into what he described as a reality that should not be forgotten or rewritten. MARIANNE BERMUDEZ

Bongbong Marcos and I are close in age. Given that he is often in the news lately, I watched an old CBS News video showing him partying with the Marcos clan in the early 1980s. The video shows a handsome young man, with dabs of face paint and glitter, and sporting a conspicuous plastic bow tie blinking at regular beats. Ferdinand Marcos Jr. was singing “We Are the World” into a microphone. The popular song written by Michael Jackson was recorded to raise funds for a starving Africa.

There are people dying

And it’s time to lend a hand to life

The greatest gift of all …

We are the world, we are the children …

On Aug. 26, on the ANC program “Headstart,” Marcos, now 57, claimed that “recent political history” looked favorably on his father’s legacy, and that he often heard a “constant refrain” that started with “Buti pa noong panahon ni Marcos” (It was better during Marcos’ time).

The son of Ferdinand Marcos claims to have a following among the youth today, who believe him when he says the Philippines would have been as prosperous as Singapore today had not the Edsa People Power Revolution interrupted his father’s rule.

In his ANC interview, Bongbong Marcos pointed to the thousands of kilometers of roads built during his father’s administration, the self-sufficiency in rice, the adequate power generation. When questioned about his father’s corruption and human rights record, he answered, “What am I to say sorry [for]?”

READ: Bongbong Marcos is right: Why should he say ‘Sorry?’

While Bongbong was partying and belting out a song into a microphone, what were other Filipinos of his generation doing? Was Bongbong’s memories of the Philippines then shared by others belonging to the same generation?

I am of that generation. And my peers and I recall those years differently.

Bongbong did not have to look to Africa for starving children. About the time he was singing into that microphone, there was a famine in Negros and the gaunt, pot-bellied children of sakada (wage farmers) were dying of hunger and poverty.

READ: ‘Martial law really happened, we were there!’

Most of the members of Patatag were college students or young professionals in their early 20s, like me, and like Bongbong Marcos.

Patatag worked closely with a street theater group called Peryante, of which I was a member.

The two groups had been trained in Augusto Boal’s Theater of the Oppressed, a theater form meant to be a mirror of society’s ills.

Peryante portrayed Philippine society in satire, the nation as vaudeville, “ang perya ng bayan, perya ng lipunan (the fair of the nation, the fair of society).”

After the assassination of Ninoy Aquino in 1983, street protests gained momentum. Both Patatag and Peryante were standard performers at rallies, as well as labor strikes, peasant marches, campus forums and youth festivals.

If it was any indication of the intensified number of public protests held then, Patatag and Peryante had at least 72 street performances from July to October 1984.

All said, there were at least two or three rallies a week, with 300 to 60,000 people in attendance. Our “stage” varied depending on what was available—the backs of flatbed trucks, traffic medians, the post office steps at Liwasang Bonifacio, school cafeterias and even church altars. 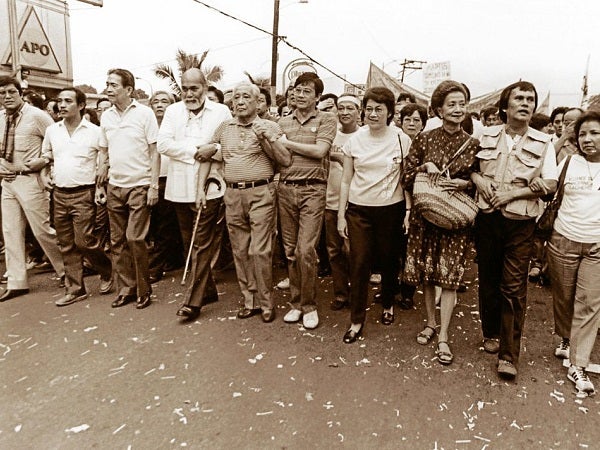 A PAGE FROM MARTIAL LAW HISTORY. The dictatorship was practically on its last legs when the usual suspects in the Marcos opposition led yet another protest march on Oct. 7, 1984. In a little over a year, People Power on Edsa would stun the world. From right: Etta Rosales, Lily de las Alas-Padilla, Cory Aquino, Wigberto Tañada, Lorenzo Tañada, Ramon Pedrosa, Ambrosio Padilla. They marched from Santo Domingo Church on Quezon Blvd Extension in Quezon City to Welcome Rotonda, on the boundary with Manila, where a reception party of riot cops dispersed them. INQUIRER PHOTO

Throughout the late 1970s and the mid-1980s, there were rice shortages, not once but often. There were long lines at government stores called Kadiwa Centers, of people waiting their turn to buy rice.

In fact there was so little rice available that the government was mixing ground corn with poor-grade rice to sell. And even the corn-rice mix had to be rationed; you couldn’t buy more than 5 kilos at a time.

Despite the TV and radio ads and jingles proclaiming that ground corn was good for you, frequent trips to the bathroom proved otherwise.

There were days when gas stations also “rationed” diesel and gasoline. And again, one could buy only a few liters at a time unless you were a government official.

There were frequent power outages and electricity, too, was rationed daily per district.

I remember that the outages were so frequent that I could set my watch to 2 p.m. when my elderly neighbors would drag their chairs and bring their fans outside their homes, saying, “Brownout na!”

The power shortages were so bad that Marcos, the father, commissioned Westinghouse to build a nuclear power plant in Morong, Bataan province, to supply power to surrounding cities and their industries.

But the plant’s design was outdated, plagued by some 4,000 defects and was sitting on a known earthquake fault line. Of the $2.3 billion borrowed funds used to build the plant, $80 million allegedly lined the pockets of Marcos and his crony Herminio Desini.

From June 18 to 20, 1985, I witnessed a solidarity unprecedented. Our theater group joined a people’s strike against the nuclear power plant that immobilized the entire province of Bataan.

Some 33,000 students, working-class youth, workers, farmers, professionals, priests, nuns and seminarians from Central and Southern Luzon, marched to Balanga town to protest the misappropriated funds used for the nuclear power plant, and to prevent its use.

READ: Bataan Nuclear Power Plant gets no funds in 2013 / Bishop eyes conversion of Bataan nuke plant into a tourist spot

Even local businessmen agreed to close shop to allow their workers to join the protest. Everything was at a standstill; no businesses were open, not even a sari-sari store.

We joined about 200 students and teachers from the University of the Philippines (UP), marching from one barrio to another, performing at each stop, encouraging residents to join the protest.

When night fell, we found ourselves walking in the dark, drenched by the incessant rain, and relying on the few who were wise enough to bring flashlights.

Then we heard the jeeps, and the heavy shuffling of feet. Before I knew what was going on, soldiers with guns came out of nowhere and blocked the road. If we were to be killed or arrested, only the rice fields around us would have witnessed it.

The most senior professors, mostly women, stepped up to negotiate. After about an hour, we were miraculously allowed to proceed, unharmed.

We learned the next day that others were not as lucky. Several protesters were hurt or arrested as they faced tanks at military barricades.

As the protest movement swelled in number, the threats to life and limb increased. Patatag and Peryante gained a reputation for foolhardy courage.

During dispersal of rallies, I would hear the zing of bullets that missed my cheek by centimeters. Although one may say that reckless bravado and imagined invincibility are the hallmarks of the young, for the most part, the activists then were well aware of the danger they faced.

A Patatag member, while breaking into a run during a violent dispersal, felt a bullet puncture his right lung, traveling internally and piercing his liver twice before exiting through his chest. It was a miracle that that UP math student survived.

It was a conscious choice for me to be part of the protest movement after five of my elder siblings were arrested, tortured and sexually molested in Marcos jails.

By the time I joined my first rally, my brother Ronald Jan had already mysteriously disappeared after the military raided our home and Jun, another activist brother, had been gunned down in Nueva Ecija province.

Foolhardy or not, the activist youth of the day, the tens of thousands of us, felt that if we stayed in the safe confines of our schools and homes, then we would have tolerated, and thus inadvertently supported and furthered the crimes of the dictatorship through our inaction.

And thus, we filled the streets, singing:

It amazes me that Bongbong Marcos has a glaringly different recollection of the days under martial law. Perhaps it is because he spent his high school and college years studying in England, only coming home to party on his father’s yacht.

READ: How much do we know about martial law? You’ll be surprised

And when he came home to become vice governor, perhaps he spent those days in the cloistered province of Ilocos, where, yes, his father had built kilometers of beautifully paved roads in time for his sister’s wedding.

Perhaps as vice governor, then governor there, he failed to watch the evening news, which, even under strict government sanctions, would sneak in footage of the thousands of youth massing to protest against his father’s dictatorship.

Perhaps, like the students and youth who surround Bongbong today to say to him, “We are with you,” and repeat the “constant refrain” of accolades for his father, he doesn’t know what he’s talking about.

Why Bongbong Marcos should run for president in 2016