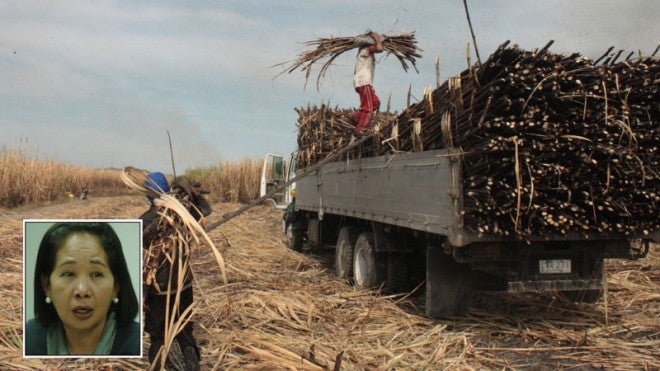 Two years after figuring in a viral YouTube video showing her playing on a slot machine in an unnamed casino, which reportedly prompted President Benigno Aquino III to show her the door as Land Transportation Office (LTO) chief, former Assistant Transportation Secretary Virginia Torres recently showed up at the Bureau of Customs (BOC) to do business. She left empty-handed.

The controversial ex-LTO head, said to be one of the President’s shooting buddies, gave customs personnel a big surprise when she showed up at the Customs-Intelligence Group (IG) office on Aug. 20 allegedly to negotiate the release of at least 64 shipping containers of smuggled Thai sugar worth more than P100 million.

The shipments, misdeclared as general merchandise, were not covered by any import permits from the Sugar Regulatory Administration (SRA), an agency under the Department of Agriculture.

Imported through dummy firms, the sugar was part of more than 120 shipments that were the subject of at least 24 alert orders issued by the IG during the past five months.

Worse, Torres allegedly dropped the name of President Aquino and suggested that the proceeds from the sale of the illegally imported sugar would be used in the 2016 elections.

Sought for comment, Customs Deputy Commissioner Jessie Dellosa confirmed to the Inquirer that Torres “paid a visit to the IG office to appeal her case.”

Dellosa, a former Armed Forces of the Philippines chief of staff, said that while his staff—Special Assistant Willie Tolentino, former Customs Enforcement and Security Service (ESS) chief—politely listened to Torres’ plea, “the fact that the shipments were in violation of the law cannot be overlooked.”

Dellosa asserted that “the ‘who’ in illegal imports has never been a consideration in meeting the IG’s actions on Tariff and Customs Code of the Philippines-related concerns.”

“Each and every case is reviewed and acted upon solely on the facts and circumstances,” Dellosa said.

With the late 2013 launch of the customs bureau’s reform program, the IG “has upheld total objectivity, fairness and impartiality in pursuing its mandate of protecting government interests in revenue collections and our people from the entry of contraband,” he added.

Contacted by phone, Torres admitted dropping by the IG office on Aug. 20 to see Dellosa and appeal the seizure of several shipments of imported “general merchandise.”

“But I wasn’t able to talk to him. Instead, it was (Tolentino) who talked to me and took note of my request,” she said.

Torres said the shipments were not hers. “I made the appeal on behalf of my friend (Philip Sy, who also showed up at the IG office minutes after Torres’ arrival),” she said.

“That is why, when (Tolentino) explained to me that they could not release the sugar shipments, I reprimanded Philip. I didn’t know that they were smuggled sugar. I was told by Philip they’re general merchandise,” she said.

Torres claimed that she had no knowledge of the import business.

“Philip just asked me to help him,” she said, stressing “I’m not for illegal business,” referring to smuggling.

Sy, described by customs insiders as a “customs player,” did not respond to this reporter’s request for an interview.

“I’m busy here in Tarlac. I lease property in a hacienda,” Torres said, but did not name the sugar plantation.

Torres also confirmed that she had been seeing Customs Commissioner Alberto Lina, whom she described as her “longtime friend.”

“It was just a friendly visit…No business at all,” she said.

A source from the Office of the Commissioner said that during her visit, Torres was accompanied by a “certain Colonel Liwanag” and a “certain Nory,” said to be a former driver at Malacañang.

Customs personnel interviewed for this report disputed some of Torres’ claims.

According to them, part of her conversation with Tolentino went like this:

Tolentino: “I’m talking to you because you seem to have a problem.”

Torres: “Yes. The sugar that just arrived has also come under alert order. We’re asking you for advice.”

Tolentino: “When was the alert ordered?”

Tolentino: “Is that yours?”

Tolentino: “How many containers?”

Tolentino: “If it has come under alert order, it will be difficult for us to do anything.”

Torres (chuckling): “Not all, please … And what we should do … Maybe something just needs to be signed and the shipments can be released.”

Tolentino: “But why did you not get an import permit? Before I left ESS, the Task Force Pantalan seized (eight containers). That’s also sugar.”

Torres: “That’s also mine, that’s why we are going after it.”

Torres: “Help us, please (humming) … It’s election time again . . . Our problem is Deputy Commissioner Dellosa … Maybe we can meet … There are many smugglers. Why the others . . . I’ll follow you.”

A source said Torres mentioned the President’s name and claimed she had contacts at the SRA.

“I have contacts there. We have an SRA permit, but it’s local . . . Don’t we grow sugarcane at (Hacienda) Luisita? Were you not reported in newspapers as grateful to the President … ? I lease and we plant together,” Torres said.

Both President Aquino and Torres hail from Tarlac province. Torres, a native of La Paz town, served as LTO head in Tarlac before the President appointed her assistant transportation secretary to head the LTO in 2010.

READ: In the Know: Virginia Torres’ ties to Aquinos

The Sugar Alliance of the Philippines (SAP), the biggest group of sugar planters and millers in the country, said it was “very alarmed” because “if this report about Torres’ visit to the Bureau of Customs is validated, it proves that former government officials like Virginia Torres have been dropping and using the President’s good name in asking BOC officials to lift the alert orders on smuggled sugar shipments for their personal gain.”

“It is likewise alarming that Ms Torres is allegedly intimating to customs officials that the funds will be used for the coming elections,” said Manuel Lamata, chair of the SAP.

Lamata said the SAP had been “receiving reports that some government officials are using their position to act as power brokers at customs.”

But “this is the first time for us to hear that an official brazenly and wantonly flaunted her alleged links to the President to get away without fear that somebody might hear or report her to the President himself,” he added.

“To go to the BOC to allegedly negotiate an otherwise illegal deal is an act of either supreme confidence or desperation,” he said.

The SAP warned that releasing smuggled sugar to the local market would curtail demand. “Hence, nobody will buy local sugar anymore,” the group said.

“It will also harm our farmers because they will be competing against sugar that has been highly subsidized by the Thai government. That’s cheap sugar to be dumped on us. Likewise, imported sugar is not subjected to any quality control tests here, making them suspect to use,” it said.

Lamata has brought the issue to the attention of former Interior Secretary Mar Roxas, now the presidential standard-bearer of the ruling Liberal Party in the 2016 elections.

“We wanted Secretary Mar Roxas to look into this matter,” Lamata said, recalling Roxas’ promise, made in a speech during the recent Philippine Sugar Technology convention in Cebu City, that he would support the industry.

“This is a golden opportunity for Secretary Mar to prove that he indeed has our backs and that the insinuation that the funds will be used for the elections is not true,” Lamata said.

He urged Roxas to “look into the activities of these smugglers, especially those who use their perceived closeness to the powers-that-be to extract favors.”

“At the very least, he needs to denounce the activities of these unscrupulous officials,” Lamata said.

The SAP earlier called for the resignation of Lina for allegedly allowing sugar smuggling to flourish.

Sought for comment, Lina said: “That’s his right…but I serve at the pleasure of the President.”

In a letter to President Aquino, the SAP condemned the “dramatic increase in sugar smuggling during the past four months.”

That “sadly coincides with the appointment of Commissioner Lina as head of the BOC,” the SAP said, noting that in a previous letter to Malacañang, it “tried to warn” the President that “Commissioner Lina’s soft stance on smuggling will be perceived by criminal syndicates as a sign that the ports are now open for business.”

Lina strongly denied the SAP’s claims, saying the customs bureau’s intensified campaign against sugar smuggling was a work in progress.