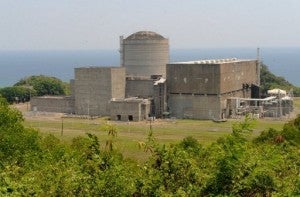 MANILA, Philippines ― A Catholic bishop opposed the proposed reopening of the Bataan Nuclear Power Plant (BNPP) to address the looming energy crisis in 2015 saying that it should just be converted into a tourist spot.

Balanga bishop Ruperto C. Santos said Sunday that income could be generated by converting the “white elephant” project of the Marcos administration into a tourist destination.

“It should not be repeated, and everything in the future should be studied well, not impulsively. This is also educational,” Santos said in an interview over Radyo Veritas.

Santos also blasted plans to renovate the nuclear plant stating that it is a threat to the lives of residents and to the environment.

“It is really a threat to the environment―to the bodies of water, the air, and the land. The soil will be poisoned, the water would be contaminated, and the air will be polluted,” Santos said.

He also urged the government to look for alternative sources of energy instead of tapping the nuclear plant for energy.

“Because life is so much more valuable to us than profit or money to be gained from cheap electricity or for the selfish needs of the body…We believe that energy can be generated from wind or from water (hydro) or from the sun (solar) that can be studied, tested or harnessed,” the prelate added.

Senator JV Ejercito said recently that opening the BNPP will avert the looming energy crisis in 2015.

Since the BNPP was completed in 1983, it has not produced a single watt of electricity. It cost $1.05 billion to be built and the National Power Corporation spends tens of millions of pesos annually for its upkeep.

Bishops adamant: No to nuclear power