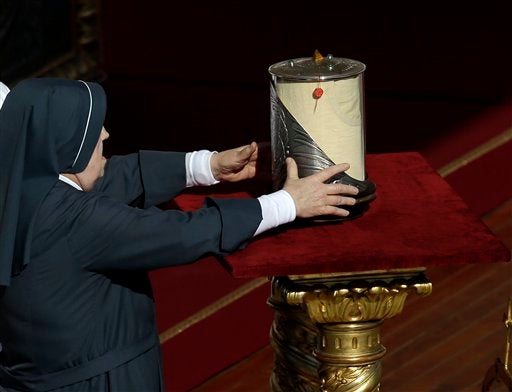 A nun carries a relic of late Pontiff Paul VI during the beatification ceremony and a mass for the closing of of a two-week synod on family issues celebrated by Pope Francis, in Saint Peter’s Square at the Vatican, Sunday, Oct. 19, 2014. AP PHOTO 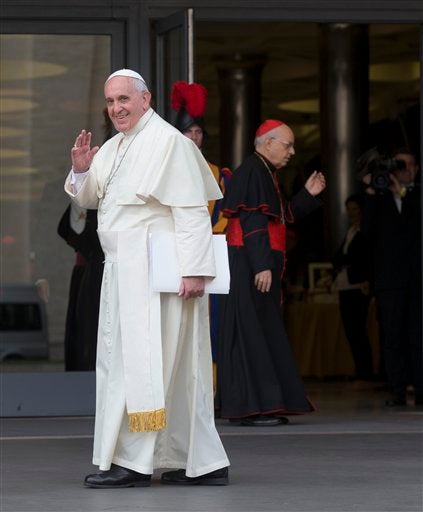 Emeritus Pope Benedict XVI was on hand for the Mass, which took place just hours after Catholic bishops approved a document charting a more pastoral approach to ministering to Catholic families.

They failed to reach consensus on the two most divisive issues at the synod: on welcoming gays and divorced and civilly remarried couples. But the issues remain up for discussion ahead of another meeting of bishops next year.

While the synod scrapped its ground-breaking welcome and showed deep divisions on hot-button issues, the fact that the questions are on the table is significant given that they had been taboo until Francis’ papacy.

“God is not afraid of new things!” Francis exclaimed in his homily Sunday. “That is why he is continually surprising us, opening our hearts and guiding us in unexpected ways.”

He quoted Paul himself as saying the church, particularly its synod of bishops, must survey the signs of the times to make sure the church adapts methods to respond to the “growing needs of our time and the changing conditions of society.”

Paul was elected in 1963 to succeed the popular Pope John XXIII, and during his 15-year reign was responsible for implementing the reforms of Vatican II and charting the church through the tumultuous years of the 1960s sexual revolution.

Vatican II opened the way for Mass to be said in local languages instead of in Latin, called for greater involvement of the laity in the life of the church and revolutionized the church’s relations with people of other faiths.

He is perhaps best known, though, for the divisive 1968 encyclical Humanae Vitae, which enshrined the church’s opposition to artificial contraception.

The beatification marks the third 20th century pope Francis has elevated this year: In April, he canonized Sts. John Paul II and John XXIII. That historic event marked the first time a reigning and retired pope — Francis and Benedict — had celebrated Mass together in public in the 2,000-year history of the church.

Benedict returned to the steps of St. Peter’s Basilica for Paul’s outdoor beatification Mass in a potent symbol of the continuity of the church, despite differences in style and priorities that were so evident in the synod meetings this week.

Paul was beatified, the first step toward possible sainthood, after the Vatican certified a miracle attributed to his intercession concerning a California boy whom doctors had said would be born with serious birth defects. The boy, whose identity has been kept secret at his parents’ request, is now a healthy teen.

A second miracle needs to be certified by the Vatican for him to be canonized.