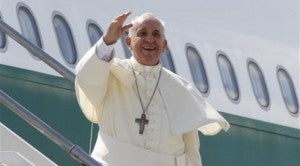 VATICAN CITY — Pope Francis was set to sort his allies from his enemies Saturday with a Vatican vote on a document drafted at the end of a fierce two-week debate over opening the Catholic Church’s doors to remarried divorcees and gays.

The vote will close a special synod of bishops from around the world which has seen conservatives clash publicly with liberals over a Francis-backed drive to reform the Church by softening its approach to sinners.

Ahead of the vote, the cardinals overwhelmingly approved a message to the world’s 1.2 billion Catholics stressing the value of “unique and indissoluble conjugal love” but without touching directly on the hot topic of non-traditional unions.

Several told a news conference they were confident the final synod document would pass with the necessary two-thirds majority later Saturday after Vatican experts raised the real possibility it could fail.

The vote has turned into a referendum on the pope’s audacious line.

Francis, 77, has called for the Church to take a more merciful approach to unwed mothers, remarried divorcees and gays, famously saying of homosexuals, “Who am I to judge?”

A preliminary report on Monday made waves around the world by suggesting the Church should reach out to homosexuals, who have “gifts and qualities to offer the Christian community”, outraging traditionalists who had to be reminded by the Vatican that it was a work in progress.

A fresh report Thursday summed up the reactions of 10 working groups of bishops, which mixed declarations of respect for homosexuals with fierce insistence that any opening up to sinners would imply the Church condoned their behaviour.

The final document is expected to take into account the bishops’ amendments, but will be written by a drafting committee made up of perceived progressives appointed by Francis himself.

The fallout in the corridors of power, which Boston Globe Vatican expert John Allen described as “like a daytime soap opera”, has already caused at least one head to roll.

Outspoken Cardinal Raymond Burke, currently head of the Vatican’s top canon law court, confirmed to Buzzfeed that he will be removed from the job to be made patron to the Sovereign Military Order of Malta, an honorary post.

He told the US news website: “The pope is not free to change the Church’s teachings with regard to the immorality of homosexual acts or the insolubility of marriage or any other doctrine of the faith.”

The vote will reflect the attitude of the top echelons of the Church towards reform — and ultimately towards Francis’s rule, which has been coloured since his election in March last year by a determination to show the more humane side of the centuries-old institution.

“The Synod splits over gays and divorcees: there’s a risk of an anti-pope vote,” read a headline by Franca Giansoldati, Vatican expert for Italy’s Il Messaggero daily, which described the vote as “a nasty test for Pope Francis”.

“The risks are high. If the amendments are not inserted in the text the biggest surprise could come from the vote. The majority, for now, do not seem to be in favour — and the count could prove fatal,” she said.

German Cardinal Walter Kasper, an ally of the pope’s who has been pushing for reform, has said he believes the “majority” of those taking part in the synod are open to change.

Kasper suggested in February that remarried divorcees should be allowed to take communion under certain conditions.

Critical bishops have said the initial document placed “too much emphasis on the problems facing the family”.

“Many bishops have asked that the document be thoroughly re-written. There have been such a number of negative reactions that the risk is it won’t pass the vote unless its heavily revised,” Marco Tosatti, who writes for La Stampa’s Vatican Insider, told AFP.

Some resent the intense media glare on the proceedings. Cardinal Robert Sarah of Guinea told the Catholic News Agency that all the attention on gay couples was “an attempt to push the Church to change its doctrine”.

This synod will be followed by a year of consultations, and a follow-up questionnaire will be sent out to dioceses around the world. A second, larger synod will then be held in October 2015.

After that, the results will be handed to the Argentinian pope, who will have the final say in outlining the Church’s stance on family matters.

Adolfo Nicolas, superior general of the Society of Jesus, or Jesuits — to which Francis belongs — told the I.Media religious news agency to watch for a possible “revolution” a year from now.

Cardinal Reinhard Marx of Munich, an ally of the pope, said there was no turning back. “There have been two steps forward, there may be one step backwards, but certainly not two.”

Pope Francis and the family in crisis