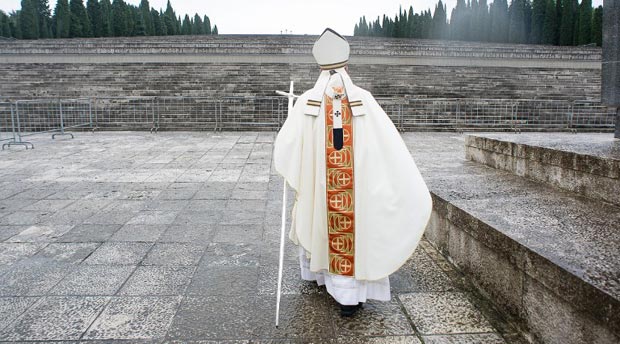 Pope Francis arrives to lead a memorial mass at the military cemetary for World War I soldiers at Redipuglia, near Gorizia, northern Italy, on September 13. AFP

VATICAN CITY—Pope Francis on Sunday opens a two-week meeting of bishops and cardinals from around the world aimed at making the church’s teaching on family life — marriage, sex, contraception, divorce and homosexuality — relevant to today’s Catholic families and more readily understood and appreciated. The pre-synod debate has been dominated by mudslinging between liberals and conservatives over divorce and remarriage, but there are many more issues up for discussion. Here are 5 things to know about the synod.

What’s on the Table?

Last year Vatican officials sent out a 39-point questionnaire to bishops’ conferences across the globe asking for frank input from clergy and lay Catholics on a host of hot-button issues like pre-marital sex, contraception and gay unions. They got it. In a brutally honest compilation of the data released in June, the Vatican conceded that the vast majority of Catholics reject church teaching on sex and contraception as intrusive and irrelevant. It said the church had to do a better job ministering to gays in civil unions and to children being raised in such families. It blamed pastors for failing to adequately preach church teaching and said a “new language” was necessary to convey the church’s message. The findings are to form the basis of the discussion.

Who’s Coming to Rome?
In all, 191 synod “fathers” are taking part: Most are presidents of national bishops’ conferences, others were named by Francis and still others are taking part thanks to the Vatican positions they hold. Sixty-one are cardinals, the rest are bishops, patriarchs or priests. Given that the issue at hand is Catholic families, Francis also invited 12 ordinary Catholics, members of families, to participate. Based on information provided by the Vatican, the couples appear to be some of the model Catholic families that the Vatican often showcases: One couple from the US is prominent in promoting natural family planning, a natural birth control method endorsed by the church that involves monitoring a woman’s cycle to avoid intercourse when she’s most likely to conceive. The Rev. Thomas Reese, a columnist at the National Catholic Reporter, said it remains to be seen if these hand-picked lay Catholics will represent the views of the great majority of ordinary Catholics. “Certainly any who think natural family planning is the church’s great gift to the laity will not,” he said.

What Will the Public See?

Technically, the synod is a closed-door affair, with only the opening session broadcast and a final written message published. Press conferences are scheduled throughout. In past synods, the Vatican published written summaries of bishops’ prepared remarks in the closed-door meetings and provided daily briefings about the general themes discussed. This time around, however, the Vatican appears to be clamping down on the dissemination of such detailed information to encourage frank and spontaneous discussion. No written summaries are being provided.

What’s Happening on The Sidelines?

As occurs during any big Vatican meeting, church reform groups are descending on Rome in hopes of influencing the debate or at least grabbing some airtime while attention on the Vatican is high. A prominent reform group, We Are Church, is hosting advocates for women’s ordination and an end to priestly celibacy. The US-based Catholic gay rights group New Ways Ministry will also be there, encouraged by the fact that pastoral care for families headed by same-sex couples is a top area of discussion. The European Forum of Lesbian, Gay, Bisexual and Transsexual Christian Groups, is hosting several events around Rome and across the ocean, the Human Rights Campaign — the largest LGBT advocacy group in the US — is launching a two-week, seven-city faith vigil “to send a message of acceptance while bishops meet.” On the other side of the ideological spectrum, an international group of conservative legal scholars and policy-makers wrote to the synod, urging it to uphold traditional family values by encouraging small communities of married couples to support one another and serve as mentors at the parish level. A coalition of pro-life groups, Voice of the Family, warned that while the synod could offer renewed hope to the faithful, it also “risks confusing Catholics and non-Catholics worldwide on Catholic teaching on sexuality, family and life.”

How Does it End?

The synod technically ends on October 19 with the beatification of Pope Paul VI, the third 20th century pope Francis will elevate this year following the dual canonizations of Sts. John Paul II and John XXIII in April. Paul is best known for having overseen the completion of the Second Vatican Council, which helped bring the Catholic Church into the modern world. Perhaps more important in this context, Paul also wrote Humanae Vitae, the 1968 encyclical which enshrined the church’s opposition to artificial contraception. The actual work of the synod will wrap up a day earlier when the bishops put the final touches on their “message” or final statement about what they have achieved. This is only phase one of the process, however. Bishops will reconvene in October 2015 to put forward formal proposals for Francis to consider in a future document.