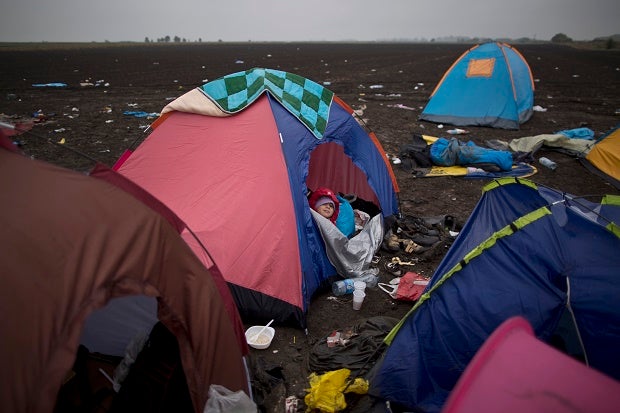 A Syrian refugee child peeks through his family’s tent, at a makeshift camp for asylum seekers in Roszke, southern Hungary, Friday, Sept. 11, 2015. EU officials and human rights groups say they’ve been disappointed by the animosity toward asylum-seekers in countries from which hundreds of thousands of people fled communist dictatorships just decades ago. AP

PARIS — Paris authorities are evacuating more than 500 Syrian and other migrants from tent camps and moving them to special housing as the country steps up efforts to deal with Europe’s migrant wave.

City social workers and charity workers woke the migrants before dawn Thursday, and they gathered their belongings calmly, watched over by police.

The operations took place at a large camp near the Gare d’Austerlitz train station in southeast Paris, and another in the 18th arrondissement of northern Paris.

Paris city hall said migrants are being bused to special migrant housing centers in Paris and the surrounding region, and offered help applying for asylum.

France has been criticized for its relatively slow response to the migrant crisis even as neighboring Germany has taken in hundreds of thousands of people.