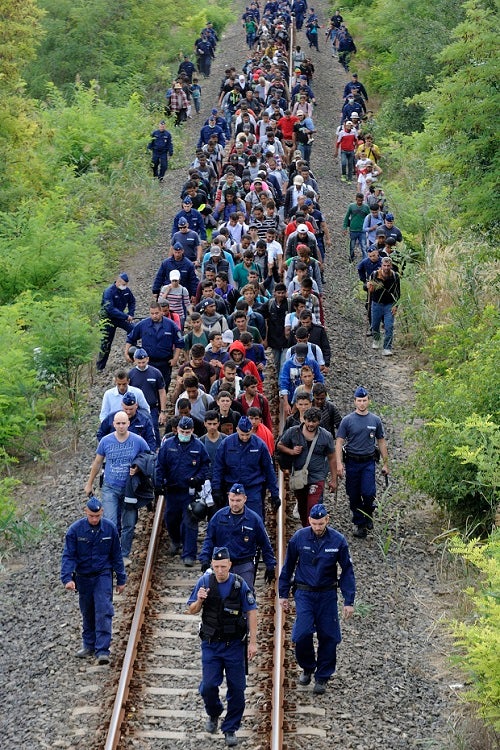 Migrants and refugees who left the police reception center in Roszke in order to avoid being registered are escorted by police along the railway tracks connecting Horgos in Serbia and Szeged near Szeged, 169 kms southeast from Budapest, Hungary, Tuesday, Sept. 8, 2015. AP

STRASBOURG, France—The EU unveiled plans Wednesday to take 160,000 refugees from overstretched border states, as the United States said it would accept more Syrians to ease the pressure from the worst migration crisis since World War II.

As fresh unrest in Hungary underscored the scale of the problem, Germany pushed Europe to go further and agree long-term binding quotas with no limits on actual numbers to deal with a surge of asylum-seekers.

“Now is not the time to take fright, it is time for bold, determined action for the European Union,” Juncker said.

In response to appeals for help from an increasingly strained Europe, Secretary of State John Kerry said the United States was studying how it can resettle more refugees fleeing the conflict in Syria.

The migrants’ plight has touched hearts around the world, spurred especially by pictures last week of three-year-old Syrian Aylan Kurdi, whose lifeless body washed up on a Turkish beach.

Within Europe, mandatory quotas have faced stiff opposition, especially from eastern EU states such as Hungary which have seen a huge surge in migrants trying to get to Germany.

German Chancellor Angela Merkel—whose country is leading the way by saying it could take half a million refugees annually over several years—said Europe needed a “binding” long-term deal for the “fair” sharing of the burden.

In Hungary, at least 400 desperate migrants broke through police lines at the flashpoint town of Roszke on the Serbian border, yelling “No camp!” as they scattered in all directions.

“We don’t want to live any longer in the camps in Hungary or elsewhere, the conditions are horrible,” said a young man from Damascus.

In Denmark meanwhile, police ordered the suspension of all rail services to and from Germany as hundreds of migrants refused to disembark from trains arriving from Denmark’s southern neighbor, demanding to continue on to Sweden instead.

Most services were, however, expected to resume on Thursday.

With pressure mounting, Juncker urged EU interior ministers who are meeting next Monday to back his new plan for the relocation of 120,000 refugees from Hungary, Greece, and Italy, and a plan dating from May to relocate 40,000 others in Italy and Greece.

“It is 160,000 that Europe has to take into their arms, this has to be done in a compulsory way,” said Juncker.

Slovakian Prime Minister Robert Fico was among the most vocal opponents of the quota plan, vowing that his country would not bow to pressure from either Germany or France.

“I don’t want to wake up one day and have 50,000 people here in this country about whom we know nothing,” he said.

As the international community grappled for a solution to the crisis, Norway’s Prime Minister Erna Solberg proposed hosting a donors’ conference to help the millions of Syrians displaced by war.

And at the United Nations, proposals were being floated to authorise EU countries to board and search vessels off Libya suspected of smuggling migrants. The plan suggests that migrants would be taken to Italy while the boats would be destroyed and the people smugglers handed over to authorities.

Children who died with Aylan buried

The EU quota plans must be approved by a majority of EU states, and Berlin said it was open to a special EU refugee summit after the ministers’ meeting and ahead of the next scheduled EU summit on October 14.

A Spanish government source told AFP that Spain had agreed to take in 14,931 refugees, in addition to 2,749 who were accepted in July, bringing the country’s total to 17,680.

Britain for its part reaffirmed that the 20,000 Syrians it has promised to take over five years will come from refugee camps outside the EU and not other EU states.

Juncker’s proposals also include a permanent relocation system, and possible revision of the EU’s Dublin Treaty, under which asylum claims must be processed by the first country that refugees arrive in.

He also unveiled a list of “safe countries” including Turkey and the Balkan states that migrants would generally have to return to, plus a 1.8 billion-euro ($2.0 billion) fund to help poor sub-Saharan countries, the source of many migrants.

The human cost of the tragedy was highlighted as an Iraqi family caught up in the boat accident that claimed the life of Aylan Kurdi buried their two children who drowned along with the Syrian toddler on their way to Greece.

“Everyone was talking about this route, so we decided that we would leave, to provide them with a better life,” said Zainab Abbas, the mother of eight-year-old boy Haidar and 12-year-old girl Zainab, who died in the accident off the coast of Turkey.