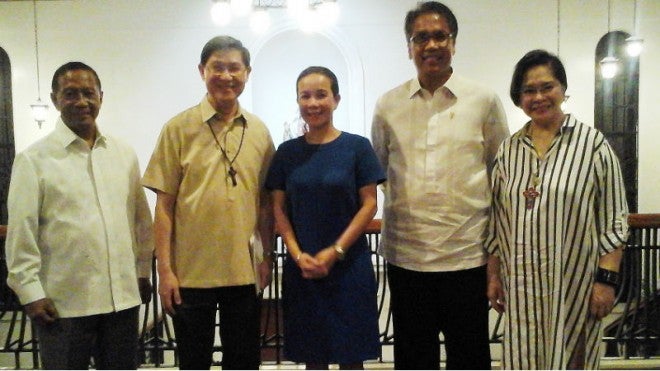 During a meeting, organized by the Parish Pastoral Council for Responsible Voting (PPCRV) on Monday, Manila Archbishop Luis Antonio Cardinal Tagle gave the message that being a leader was a form of service.

PPCRV chair Henrietta de Villa, in an ambush interview with reporters after the meeting, said it was purely an “ordinary evening prayer” gathering and there were no talks about politics.

While waiting for Tagle, who came from saying a Mass in Makati City, the three officials had the chance to talk to each other about many things except politics.

“They talked about the traffic situation that was ‘getting better’—things like that. There was nothing earthshaking or anything about politics,” De Villa said.

Prayers, courage and wisdom—these were what Sen. Grace Poe, who is considering a possible run in the 2016 presidential election, sought when she met with Tagle on Monday night at Arzobispado de Manila in Intramuros, Manila.

Tagle gathered Poe, Vice President Jejomar Binay and Interior Secretary Mar Roxas for a prayer service, where he called on the potential contenders for the presidency to keep the campaign friendly and dignified.

“What our cardinal said—and I accept this and I am thankful—is that being a leader means (being of) service. And it should not be forgotten that in all things, the leader should be the first to feel what the people are going through,” Poe told reporters.

But politics was not on the menu during the “light” meeting, with discussions centering on prayers and reflection.

“It was part of pastoral care not only of voters but also of potential candidates,” Tagle said in a statement.

Tagle said the program was simple: evening prayers, dinner, meditation on humble servant leadership in the Bible and the role of servant leaders in promoting the common good.

“No political discussion,” he said.

The camp of the Vice President said Tuesday that Binay had shaken hands separately with Roxas and Poe before they all met with Tagle.

Mon Ilagan, spokesman of Binay’s United Nationalist Alliance party, said he and Binay’s political spokesman Rico Quicho accompanied the Vice President to the Archdiocese of Manila compound but they did not join Tagle’s meeting with Binay, Roxas and Poe.

Asked whether Binay spoke to either Roxas or Poe while they were all waiting for Tagle to arrive at the compound, Ilagan said he did not see the Vice President speaking to either Poe or Roxas.

“There was no sharing of platforms. It was just plain moment of providing them some kind of spiritual rest,” De Villa said.

“We prayed together. The one who led us in prayer was the deacon, not the cardinal. The cardinal was reading with us,” she said in an article posted on the Catholic Bishops’ Conference of the Philippines website.

In his reflection, Tagle talked about John 13, a Bible verse that demonstrated Jesus’ leadership styles and practices.

“To be a servant, you must serve first,” De Villa quoted Tagle as saying.

It was actually the same reflection made by Tagle at a servant leadership in public service forum in Ortigas City last July.

On that occasion, the cardinal said leaders were expected to serve others first instead of being served by the people.

“It was very friendly,” she added. ”It was very touching for me that it was an atmosphere of friendship.”

De Villa also said that Tagle reminded the three not to lose their friendship, especially when the electoral race heats up.

“The cardinal asked them to raise the bar and integrity of the political campaign,” she said.

Poe said she also sought prayers from the cardinal.

“I asked for his prayers for whatever decision we will be making. We asked for courage and wisdom,” she said.

Poe has topped recent surveys on the voters’ preferred candidate for the presidency.

The Liberal Party (LP) has tried to convince her to be the running mate of Roxas, its standard-bearer.

But last week, the LP vice chair, Senate President Franklin Drilon, said the party should stop such efforts, because he was convinced Poe would seek the presidency.

Poe said she respected the position, especially since she was not an LP member. “It’s their prerogative to decide on those matters.”—Leila B. Salaverria and Tina G. Santos with Christine O. Avendaño