And many disappeared in the prime of youth 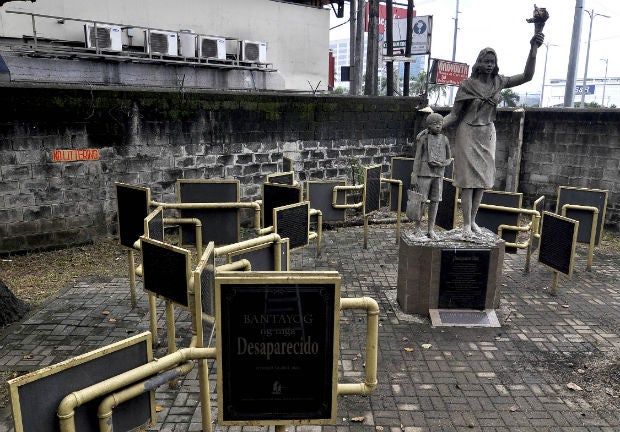 REMEMBERING THE DISAPPEARED The Flame of Courage at the Desaparecidos Monument on the grounds of the Redemptorist Church in Baclaran, Parañaque City, honors young people who fought for justice and freedom during martial law under strongman Ferdinand Marcos. RICHARD A. REYES

According to Families of Victims of Involuntary Disappearance Inc. (FIND), an organization of families, friends and colleagues of the disappeared, more than 800 cases of disappearances happened during the martial law regime of President Ferdinand Marcos.

Of the more than 250 heroes recognized at Bantayog ng mga Bayani, more than 30 disappeared, most of whom were age 30 and younger.

Consistent honor student Rizalina Ilagan graduated from Los Baños Central High School with highest honors. Apart from participating in her high school’s speech and drama club, she was also a writer for her school paper, Ruralite.

Ilagan was still in high school when she joined Kabataang Makabayan (KM) and became active in Panday Sining, the group’s cultural arm that staged street plays and musicals depicting the problems of Philippine society at rallies.

She eventually became a regional coordinator for the cultural sector of KM in Southern Tagalog, and was also on the editorial staff of its underground newsletter, Kalatas.

She was last seen in Makati City on July 31, 1977. Her family was told that she was abducted by the military while attending a meeting. Her two companions, University of the Philippines Los Baños (UPLB) teacher and research associate Jessica Sales and UPLB student Christina Catalla, were also abducted.

Christina Catalla was an economics major at UPLB when she became active in student protests in 1969. A member of the UP Student Catholic Action, Catalla was often seen participating in discussion groups, marches and protest concerts. She later joined the UP chapter of Samahang Demokratiko ng Kabataan (SDK). She also wrote a column for the UP College of Agriculture’s student newspaper Aggie Green and Gold. Her columns showed her growing political awareness.

In 1971, when Marcos suspended the writ of habeas corpus, Catalla felt a sense of urgency and mission and decided to be a full-time student and youth organizer in UPLB and nearby Laguna towns. She exhibited great potential as an organizer, instructor and propagandist.

Catalla eventually helped organize massive marches, in which she mobilized protests against the regime’s abuses. In 1972, Southern Tagalog Movement for Civil Liberties was formed, and Catalla became its provincial coordinator for Batangas province.

A research associate at UPLB, Sales is remembered as diligent, hardworking and passionate. Known to be intelligent, she was a student leader at CEU and was editor of the student paper. She was also a member of the College Editors Guild of the Philippines.

As a teacher, she was known to have urged her students to speak about the country’s sociopolitical situation under martial law. She also engaged fellow teachers in discussions on how to make teaching relevant despite curtailment of freedoms under martial law.

Sales was also involved in Folk Medicine Society, which aimed to revive interest in traditional and herbal medicine. The group trained doctors, nurses, pharmacists and biology students and went to far-flung communities to teach local healers and other community members as well.

Months later, the military informed the families of Catalla, Ilagan and Sales that the three missing girls had been killed in an encounter in Mauban, Quezon province. The military quoted a document reportedly seized from communist leader Jose Maria Sison.

No further proof was offered to the families, and the military subsequently denied any knowledge of the whereabouts of the students. Their bodies were never found.

Ramon Jasul, a student at Lyceum of the Philippines, was last seen on July 30, 1977, a day before Catalla, Ilagan and Sales were abducted.

A student leader described as bright and intelligent, Jasul wrote for his high school paper, The Banahaw. He once dreamed of becoming a journalist.

Jasul eventually joined Samahang Molave and became active in group discussions. He joined rallies and demonstrations that at times became violent. Once he was detained due to his participation in rallies.

In 1971, after the suspension of the writ of habeas corpus, Jasul left Lyceum and returned to his hometown, Lucban, Quezon province, where he organized Bagong Kabataan ng Lukban, which he led until martial law was declared in 1972.

Jasul eventually went underground and continued his organizing activities until he disappeared in July 1977. His body was never found.

As a young girl, Ladlad, known to family and friends as Tish, was an avid reader. At UPLB, she cofounded the UP Cultural Society and was the first female editor of the UP College of Agriculture’s student paper, Aggie Green and Gold. She was also an active member of the College Editors Guild of the Philippines and the League of Editors for a Democratic Society.

After joining SDK, Ladlad became more politically aware, which was evident in her writings. She also began living in farmer communities and engaging the people there in political discussions.

When the writ of habeas corpus was suspended, Ladlad left UPLB. She later married fellow activist Vicente Ladlad, with whom she had a daughter.

Leticia Ladlad was supposed to have met with comrades somewhere near Paco Church in Manila in November 1975 when she disappeared together with the entire group. She was 25.

In a June 2006 column, Inquirer columnist Rina Jimenez-David recalled her cousin Tish: “It is with some shock that I realize that I was already about to graduate from college when she disappeared. My last clear memory of her is at a family party, when she was already a college student at UP Los Baños, and I was, perhaps, in high school,” she wrote. “It was the last time I saw her.”

In her column, David also recalled that their uncles called Tish “our little farmer girl” and how she would hear stories of Tish from “whispered conversations.”

“It was the height of martial law, after all, and ordinary Filipinos had been cowed into thinking that government spies were lurking everywhere,” David wrote.

“When the family network exploded with news of Tish’s disappearance, we heard about fevered efforts to trace her whereabouts—uncles and cousins activating their government and military contacts for word on whether she was still alive or, if dead, where she had been buried. To this day, no one knows for sure (I think) what happened to Tish or where her remains can be found. Still, she is remembered,” she said.—Compiled by Kate Pedroso, Inquirer Research