Among those honored by Bantayog ng mga Bayani were 19-year-old students whose lives were terminated abruptly during martial law.

One dreamed of becoming a doctor. Another wanted to be a lawyer. The third, from a family of nationalists, loved poetry.

Though at the time only a high school student, Delia, then already a member of Samahang Demokratiko ng Kabataan (SDK), led schoolmates and friends in protesting tuition increases, higher oil prices and the brutalities of the Marcos regime.

People remembered her as a petite, good-looking girl with a pleasant voice and fine manners. A consistent honor student, Delia was also a leader in various student organizations and an officer in her army training class.

She was heavily influenced by her two activist brothers. Her father was a farmer while her mother was a fish stall owner/vendor.

Although she once dreamed of becoming a doctor after graduating from high school, Delia did not go to college. When martial law was declared in 1972, Delia kept on meeting in secret with women and mothers, forming a women’s organizing group in Samal, Bataan province, and promoting women’s rights.

Hiding in the forest

By December 1974, Delia and six others were already targets of an intensive military hunt. This prompted Delia to hide in the forest, after which she joined an armed propaganda unit.

In the forest, she was admired for her sincerity and perseverance. There, Delia used only palay sacks for blankets at night, had her bare feet punctured with thorns, and learned to eat sweet potatoes with bagoong to survive. Her backpack, which she had with her at all times, was heavy with reading and writing materials.

By 1975, Delia was already practicing acupuncture healing in communities in San Luis, Pampanga province, where she also counseled women with family and marital problems.

In 1976, she returned to Samal and continued organizing villagers. She died in January 1977 after she was shot in the chest in Sungkit, Abucay, Bataan province. She was 19. 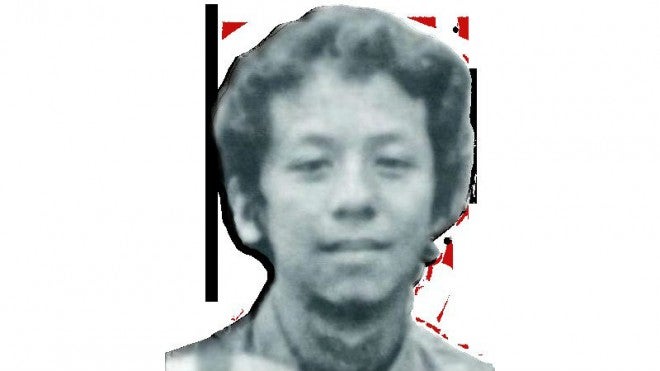 Lorenzo Bonifacio “Nik” Lansang was a student activist who dropped out of Philippine Science High School (PSHS) during the martial law years. He was caught and killed by military forces in Southern Tagalog in 1976. His name is etched on the Bantayog ng mga Bayani monument.

Named after the late Sen. Lorenzo Tañada and Andres Bonifacio, Nik’s nickname was short for “Sputnik,” the satellite that was launched on Oct. 4, 1957, a few days before he was born on Oct. 11.

Nik came from an illustrious family of writers and nationalists. His father, the late Jose A. Lansang, was a former dean of Lyceum of the Philippines’ School of Journalism and a former managing editor of the Philippine Herald before martial law was declared in 1972.

Nik’s mother, Flora Celi, was a stalwart of the UP College of Social Welfare and Community Development and the first recipient of the Gawad Tandang Sora Lifetime Achievement Award.

His uncle Teodosio, detained after the suspension of the writ of habeas corpus, was one of those involved in filing petitions against the writ suspension.

The youngest of six children, Nik was considered a genius by his family. He started reading at age 3, was good in memorization and was said to discuss authoritatively events of World War I and II. He was also a poet and an essayist.

As a sixth grader, he had read and become engrossed with Amado Guerrero’s “Philippine Society and Revolution,” and other books about sociopolitical theories.

He finished grade school with the best academic record in the history of UP Elementary School, and graduated “with highest honors,” the only time the school had given such an award.

When Marcos suspended the writ of habeas corpus in 1971, he went even more deeply into organizing fellow high school students toward a broad antifascist front. He left school by his second year, lived with a poor family in Tondo, Manila, and became a full-time youth and community organizer.

At 16, Nik joined the underground movement. For about three years, he lived in Mauban, Quezon province, until he was killed during a military raid on Feb. 18, 1976, in Barangay (village) Cassiay. He was 19 years old.

Three of his comrades, including one pregnant woman, were also killed in the raid by Constabulary forces of the martial law regime.

Dennis was a student at UP Diliman when he and two friends were accosted by soldiers in a house in Botolan, Zambales province, in February 1972. At the time, he had been working with Zambales farmers, discussing issues and helping them in planting and harvesting.

Dennis, who wanted to be a lawyer, entered UP in 1968. He joined the UP Nationalist Corps and SDK.

As a full-blown activist, Dennis was scolded by his parents for skipping class. However, he said he was already committed to working toward reforms.

Not doing so was like “covering one’s eyes with textbooks in order to blind oneself to injustice,” he said.

It was his parents who recovered his heavily bruised, bullet-riddled body in Malomboy, Barangay Poong Bato, Botolan, Zambales. Hundreds of people, including farmers and peasants, attended his funeral in Iba, Zambales. He was 19.—Almi Atienza and Kate Pedroso, Inquirer Research