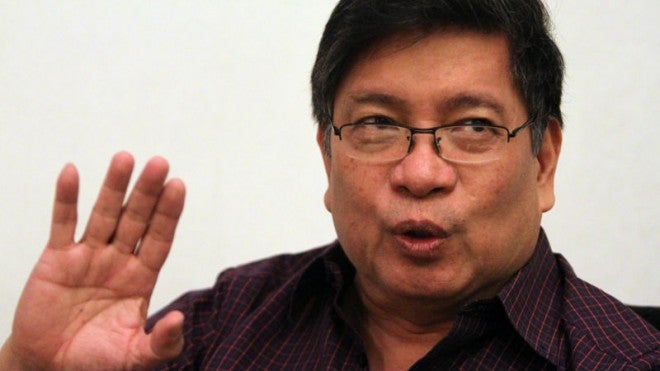 Just to protect themselves, officials of Iglesia ni Cristo’s (INC) powerful governing council are showing that they do not even fear God, expelled INC Minister Isaias Samson Jr. said on Monday night.

Samson said INC’s highest governing council violated church doctrine and the teachings of the Bible in “deceiving” members into staging protest actions against a government official and into staging rallies behind a misguided cause.

“The problem is that they have misled the members of the Church of Christ by telling them that the reason they need to rally is because I filed a case against Brother Eduardo Manalo (INC executive minister) and that he will soon be arrested,” Samson said in an interview with the Inquirer.

Before he was expelled from the sect, Samson was a minister for more than 40 years. He was the council member in charge of foreign missions and editor in chief of the INC official organ.

“First of all, it makes me feel so sad because what is going on now places the church in a very embarrassing position. But I don’t blame myself,” Samson told the Inquirer in an interview in one of his hiding places.

Sought for comment, INC spokesman Edwil Zabala said in a text message, “I will not dignify Mr. Samson’s statement with an answer.”

It was the first time Samson spoke to the media since the INC protests at the Department of Justice (DOJ) on Padre Faura in Manila and later at the Edsa-Shaw intersection, spurred by his move last week, along with his wife and son, to file detention, harassment, threats and coercion charges against the council members in the DOJ.

The complaint stemmed from his “house arrest” allegedly in the hands of the council in July, when he was accused of writing damaging articles online against the homegrown Christian sect under the name Antonio Ebangelista.

“The only ones feared by the Sanggunian (council) is media. Not even God. If they believe in God and fear God, why will they be doing those things?” said Samson.

The second-generation minister said his family’s complaint was the first time any church member dared to file a criminal case against officials of the influential INC, a church known for consolidating its ranks through a doctrine of obedience.

The case, which has yet to be assigned to an investigating prosecutor, spurred the nearly five days of protests against Justice Secretary Leila de Lima starting on Thursday afternoon, with church members, officials and supportive politicians saying that special treatment was given to Samson’s complaint and invoking the Constitutional provision of separation of church and state.

Talks between government and INC officials ended the protests on Monday, after nearly five days of camping on the streets, causing traffic jams that left commuters stranded.

Media workers and commuters also reported experiencing harassment in the hands of some protesters, but the religious sect said infiltrators, and not its members, were behind such assaults.

“When you talk about separation of church and state, there should be religious freedom. But why would they [invoke] that? Does it mean if they committed a crime, the government or the law has no power over them?” Samson said.

Submit to laws of man

He reminded the council of the INC doctrine “that we should submit to the laws of man, be it to a king or a governor.”

“That is written in the Bible: ‘Give to Caesar what is due to Caesar.’ Now, how come that they are in trouble, they don’t want to submit themselves [to the legal process]?” Samson said.

The former minister further said his case may no longer be considered an “internal” issue, as he had already been expelled and was thus no longer bound by INC rules.

Samson scoffed at the actions of some ministers who spoke during the protests, citing in particular how one even used a play of words to call De Lima “hostess siya” instead of “hustisya (justice).”

“Can you imagine a minister, a very well-respected person in the church would suddenly call Secretary De Lima, instead of “hustisya,” “hostess siya?” he asked.

“Can you imagine what kind of people are these? You see how much they have turned for the worse. It breaks my heart to see and hear those ministers saying all those words,” he added, saying the sect normally does not tolerate such behavior.

Wary about the status of his case, Samson called on President Aquino and

De Lima to give his family genuine justice and to give clarity to what really transpired during the government-INC meeting that prompted the protesters to finally go home.

“We hope that you will continue to help people like us who are oppressed. We know that God is most powerful of all, but we are also faithful that God uses people like you to give us justice,” he said.

Malacañang has denied that government made a deal with INC just so the protesters, whose numbers peaked at 20,000 on Edsa at 1 a.m. on Monday, would go home. Samson said the circumstances remained vague despite the denial.

“Although I heard that the Palace denied it made any agreement, that is still vague because, on the other hand, INC is saying it is victorious because the government had given in to its demand,” Samson said.

“It has to be explained. The Palace should be very transparent on this because that’s my only protection,” he said.

Asked if he sensed unseen hands maneuvering the situation, Samson said: “I think there are some political figures, personalities, who are trying to use the church, although I feel also that the Sanggunian is also trying to use them.”