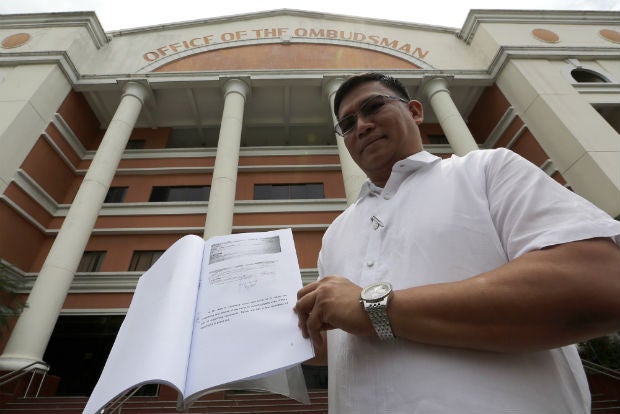 The Office of the Ombudsman was asked Wednesday to investigate claims by four whistle-blowers that nearly P500 million in pork barrel allocations of 20 current and former lawmakers ended in dubious foundations and kickbacks in schemes similar to those carried out by Janet Lim-Napoles.

He told reporters the testimonies of the four whistle-blowers would provide a different dimension as to how billions of pesos in Priority Development Assistance Fund (PDAF), the official name of the congressional pork barrel system, had been misused.

Asked if the kickbacks allegedly given to the lawmakers were the same as those provided by Napoles, Baligod said: “It actually reached 60 percent. Some even got 70 percent. That’s why we are requesting an investigation so that more evidence can be submitted.”

In their separate testimonies before the Sandiganbayan, Luy and other witnesses said Napoles offered as much as 55 percent of the project cost as “rebates” or kickbacks.

However, Wednesday’s complaint did not specify the offenses allegedly committed by the lawmakers. Instead, it urged Ombudsman Conchita Carpio Morales to take “appropriate action” based on the affidavits of the witnesses.

In his letter to Morales, the lawyer said the sworn statements were “not exhaustive as we only want to establish a reasonable basis for (the Ombudsman) to look into the allegations and validate the same.”

“We are asking the Ombudsman to conduct either a fact-finding or preliminary investigation. But what we are looking at is a case for malversation through falsification of public documents which is a nonbailable offense,” Baligod told the Inquirer.

He said the antigraft body may also recommend the filing of cases for graft and corruption against the respondents since they consented to the diversion of their PDAF to illicit transactions.

“Malversation through falsification is a very simple case. It is very easy to prove, but it is as harsh as plunder because it is nonbailable,” Baligod said.

According to Baligod, the funds were part of the P1.6-billion worth of projects which Nabcor, an agency of the Department of Agriculture, implemented as endorsed by various legislators from 2007 to 2009.

Of the amount, he said P500 million went to Napoles-owned NGOs while the rest went to other spurious foundations operated by different individuals, among them North Cotabato Rep. Nancy Catamco.

Enrile, who was indicted for graft and plunder in the Sandiganbayan for supposedly diverting his pork barrel to Napoles-linked foundations, recently secured his provisional liberty following the Supreme Court’s controversial ruling granting his bail petition.

Revilla, on the other had, remains detained at Camp Crame after the antigraft court’s First Division denied his petition for bail in February.

Besides Rep. Nancy Catamco, Baligod said among those who acted as “service providers” or operators of the spurious NGOs were Queenie Estanislao, Lanie Asuncion, Elvira Castelo, Marilou Ferrer and Cheryl Ugali.

He said some erring officials of the Commission on Audit (COA), whom he did not identify, had colluded with the NGO operators to hoodwink the government by issuing clearances for the questionable transactions.

In some instances, he said the state auditors green-lighted the payments to several foundations even before the actual release of PDAF.

Said Baligod: “What happened to the bureaucratic process of validating the program or the project implementation before a payment is made?”

“The COA report described how the funds were misused. In fact, I begrudge the COA for issuing notices of credit which means that the use of funds were cleared,” he added.

Baligod also took to task the Department of Justice for its failure to pursue cases against non-Napoles foundations which were identified in the COA special audit of the PDAF releases from 2004 to 2012.

“I’m disappointed… This is the job of the government officials yet here we are putting the safety and security of the witness [at risk] to help the government [curb corruption],” he said.