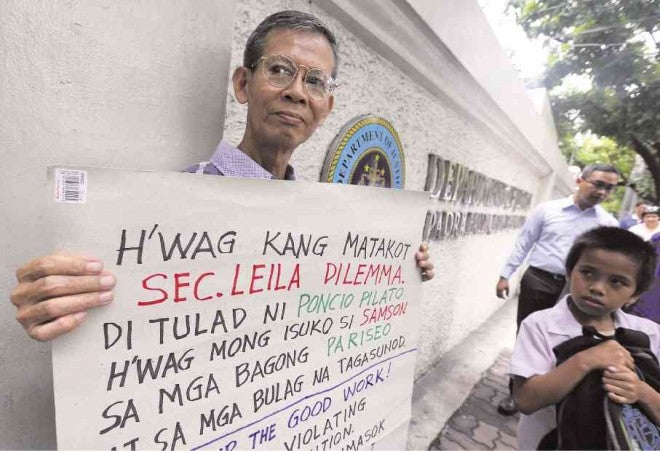 HE’S NOT ALONE A boy curiously eyes Jose Kwe, 67, staging a solo rally at the Department of Justice (DOJ) on Padre Faura, Manila, on Tuesday. Kwe holds up a placard supporting Justice Secretary Leila “Dilemma,” urging her to stand her ground on the criminal charges filed by expelled Iglesia ni Cristo (INC) minister Isaias Samson against INC. The sect massed in front of the DOJ and blocked De Lima’s car on Thursday, before proceeding to Edsa for a protest rally that blocked traffic for the next four days. MARIANNE BERMUDEZ

Justice Secretary Leila de Lima will stay on the job and government will continue its investigation into the complaint filed by a former Iglesia ni Cristo (INC) minister against leaders of the influential religious sect, Malacañang said on Tuesday.

“There is an information or a complaint. There is a process for that. Those who filed that [complaint] can continue to provide information and evidence and let the truth set us free,” Communications Secretary Herminio Coloma Jr. said in a press briefing.

Coloma echoed the statement of De Lima that the rule of law would continue to be implemented.

De Lima returned to work on Tuesday, brushing aside rumors that she has resigned or will resign soon as part of a supposed agreement between the Malacañang and INC, whose members mounted a five-day protest over the government’s alleged interference in the religious sect’s internal affairs.

She dismissed reports on the INC-Malacañang agreement that reportedly led the INC leadership to order the protests to end on Monday.

On Tuesday, outside the DOJ compound, a lone demonstrator, who identified himself as Jose Kwe, stood for about three hours carrying a large placard with messages in English and Filipino expressing support for De Lima.

“Don’t be afraid Secretary Leila Dilemma (sic). Unlike Pontius Pilate, don’t give up Samson to the new Pharisees and to the blind followers. Keep up the good work! You’re not violating the Constitution. They’re the ones interfering in the DOJ’s task. They want to show that they can dictate on our government. That is why traditional politicians are helpless in enforcing order because elections are coming,” the placard read.

Scrawled at the bottom were the words: “30 pieces of silver. Someone might turn Judas to compromise the justice system.”

Kwe, who said he was 67 years old, an engineer, a resident of Dagat-dagatan, Malabon City, and a Roman Catholic, said he came to the DOJ to express his views. He was allowed to stand beside the DOJ main gate.

“I want her (De Lima) to know that there are people who believe in her,” he told reporters.

De Lima said she would resign in “due time” if she were already sure about running for senator in next year’s elections.

De Lima added: “I will resign if I have really decided that I am 100-percent sure I will join the senatorial race. You know when that will be.”

The secretary was referring to the filing of certificates of candidacy scheduled by the Commission on Elections for Oct. 12-16. De Lima is reportedly one of those the administration Liberal Party plans to field for next year’s senatorial race.

INC broke up its five-day rally on Monday morning, hours after Malacañang announced on Sunday night that President Aquino had convened an emergency meeting with top Cabinet officials.

Top government officials and INC leaders, led by INC executive minister Eduardo Manalo, met in the wee hours and ironed out problems caused by the filing of a criminal complaint by expelled INC minister Isaias Samson Jr. against the sect’s governing council.

The INC protests called on De Lima to resign, saying she was meddling in the internal affairs of the religious sect after the Department of Justice (DOJ) accepted the illegal detention complaint filed by Samson.

Samson filed his complaint on Aug. 26. The next day, even as the DOJ had yet to begin looking into the complaint, INC members gathered at the department’s main office on Padre Faura Street in Manila and denounced De Lima.

Interior Secretary Mar Roxas said there was no government-INC “deal” in exchange for the lifting of the rally on Edsa over the long weekend.

“Through calm explanation and clarification, an agreement was reached to respect the law and due process,” Roxas said in a statement on Tuesday. “This includes the clarification that the government is not targeting Iglesia ni Cristo and there is no special treatment for or against it.”

Roxas said the meeting tackled ensuring the unimpeded flow of traffic, the safety of citizens “whether or not they’re part of the protest actions,” and preparations on emergency and health personnel “because of the dangers that may be posed” by people who may take advantage of the situation “to sow chaos.”

On Radyo Inquirer, Social Welfare Secretary Dinky Soliman, who attended the Sunday meeting, said the President had wanted to ensure that “ordinary people would not be hurt and that the millions of people passing through Edsa would not be inconvenienced.”

Sen. Francis Escudero said his position on the INC protests against De Lima was a defense of free speech, a similar right exercised by the Catholic Church concerning other issues.—Nikko Dizon and Jerome Aning

with Leila B. Salaverria and Jaymee T. Gamil