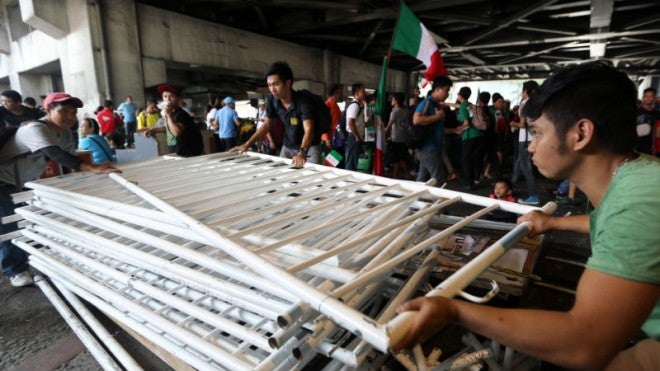 Iglesia ni Cristo protesters disperse peacefully Monday morning at the corner of Edsa and Shaw Boulevard in Mandaluyong City after a five-day protest rally that began at the Department of Justice in Manila last Thursday. INQUIRER PHOTO/NINO JESUS ORBETA

Iglesia ni Cristo (INC), the influential Christian sect, ended five days of protest on Monday morning after reaching a “mutual understanding” with the government that the rule of law should be upheld.

The Inquirer learned that high-level government officials and top INC leaders, aided by a “highly credible intermediary” from the private sector, met through the wee hours and ironed out problems caused by the filing of a criminal complaint by an expelled INC minister against members of the sect’s governing council.

A highly placed source told the Inquirer that the two sides agreed that the complaint should go through the legal process, after which the INC officials decided to lift a four-day-old blockade of Edsa, Metro Manila’s main highway.

INC general evangelist Bienvenido Santiago announced the end of the protest on the sect’s television network Net25 at 8:15 a.m.

“INC and the government have met and in this discussion, the two parties have explained their sides and so it is all peaceful now,” Santiago said.

“This peaceful gathering that we started on Thursday afternoon will end also peacefully this Monday morning,” he said.

The one-minute announcement shown on five LED screens set up at the Edsa-Shaw Boulevard intersection in Mandaluyong City was followed by loud cheers and thunderous applause from 18,000 INC followers who had been alerted toward midnight to an expected resolution of the protest.

After the announcement, INC spokesman Edwil Zabala instructed the followers to leave the intersection peacefully and collect their trash.

Malacañang confirmed reports of the meeting between government and INC officials, but declined to disclose the results of the talks.

Deputy presidential spokesperson Abigail Valte told reporters that the meeting “gave both sides an opportunity to clarify issues and concerns.”

Valte stressed that “there was no deal struck as some insinuate.”

Valte did not say when or where the meeting took place and who were present from both sides.

A highly placed source told the Inquirer that INC executive minister Eduardo V. Manalo was at the meeting.

Presidential spokesman Edwin Lacierda did not answer questions about the meeting, saying he “was not privy to the discussions” between the two sides.

Lacierda, however, said a meeting was held at the Palace on Sunday night for a discussion of the INC protest.

“The meeting with [President Aquino] last night started at around 8:30 and ended a little past midnight,” Lacierda said, adding that “matters discussed were ongoing developments on the status of the INC rally on Edsa and postexpiration permit scenarios.”

Lacierda and Valte were also at the meeting.

In a statement, Lacierda neither confirmed nor denied reports that a meeting between government and INC officials had taken place.

But he indicated that the two sides had reached an understanding and that “through goodwill and the convergence of efforts, the rule of law has been upheld.”

Lacierda attributed the resolution of the INC protest to “diplomacy,” which he described as an “important tool in avoiding unintended consequences.”

Roxas, who oversees the PNP, also announced the resolution of the INC protest that started in front of the Department of Justice (DOJ) building on Padre Faura Street in Manila on Thursday.

He said the INC protesters lifted their blockade of Edsa after the government discreetly spoke with leaders of the sect.

“The government quietly communicated with the INC leaders during the past few days. It was an opportunity to clarify the issue,” Roxas said in a statement.

“There were many who wanted to exploit the protest for their personal ends. It was important that everybody remained calm to avoid violence,” he added, without elaborating.

Earlier, Roxas confirmed reports that certain people were trying to agitate the INC leaders and followers who were demanding the resignation of De Lima for giving “special attention” to the complaint filed by expelled INC minister Isaias Samson Jr. against members of the sect’s governing council.

Among the people seen at the Edsa protest were Jose “Peping” Cojuangco, an uncle of President Aquino, and his wife, former Tarlac Gov. Margarita “Tingting” Cojuangco, who lost a run for the Senate as an opposition candidate in 2013, and Council of Philippine Affairs head Pastor Saycon.

The Cojuangcos and Saycon are known supporters of Vice President Jejomar Binay, the opposition’s presidential candidate in next year’s national elections.

Roxas did not refer to any agreement between the government and the Iglesia sides, but a source close to the sect said the government told INC leaders that the DOJ would proceed with the preliminary investigation of Samson’s complaint but would drop it for lack of probable cause.

There are two versions of how the discussions between the two sides went.

According to an INC member who had links to the sect’s leadership, President Aquino ordered Roxas to call the INC central headquarters in the early hours of Monday.

Roxas spoke to Santiago and they reached an agreement, the source said.

The source said this was the only information that the INC head office was willing to confirm to its members.

According to the other version, which reached the camp of Samson, Santiago was taken to Malacañang to meet with Aquino and Roxas hours after the President’s emergency meeting with his Cabinet and the PNP.

In that meeting, Santiago insisted on forcing De Lima to resign and for the DOJ to dismiss Samson’s complaint immediately.

According to the source, Roxas countered with a threat to charge the INC leaders with inciting to sedition if they did not recall their followers from Edsa by Monday morning.

Roxas’ camp, however, said he was never involved in the negotiations.

The two sides eventually agreed to save face through a compromise: the DOJ would proceed to investigate Samson’s complaint but drop it for lack of probable cause, the source said.

Samson complained that he was illegally detained, a criminal case that could lead to the arrest of some INC officials.

The complaint stemmed from infighting over the use of funds that the sect’s leaders insisted was an internal matter and the government should not interfere.

To save themselves from a humiliating arrest, the INC leaders called for a mass action, but stepped back when reminded that businesswoman Janet Lim-Napoles, the alleged brains behind the P10-billion pork barrel scam, went to jail after she was convicted for illegally detaining Benhur Luy, the principal witness in the case.–Jerry E. Esplanada, Marlon Ramos and Gil C. Cabacungan with RLA and wire reports

Samson lawyers to gov’t: Tell all the truth about deal with Iglesia