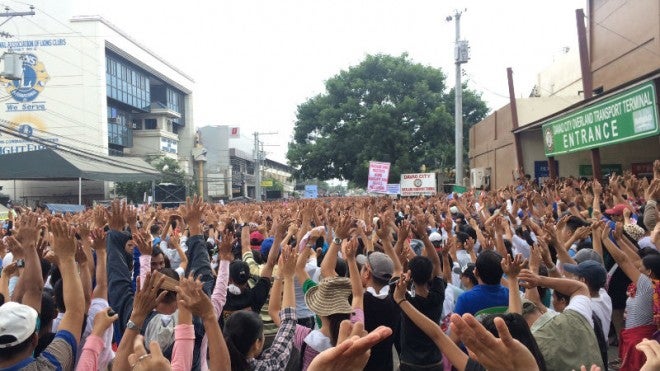 ‘NOT SURRENDER’ Members of the Iglesia ni Cristo wave their hands during their short-lived rally in Davao City. PHOTO BY NICO ALCONABA

Thousands of Iglesia ni Cristo (INC) members, who occupied the streets outside the Hall of Justice and portions of the public bus terminal in Davao City, roared in celebration after it was announced that the protest action had been lifted.

“It’s a big victory for us. We have shown the country that our faith is more powerful than politics and the government,” said a 45-year-old member from North Cotabato, who refused to be named.

The member, who was raised by INC parents, said he and the others were told by their ministers to start packing up as early as 9 in the morning on Monday because the protests had been a success.

An INC announcement ended Monday a five-day protest in Metro Manila and stopped delegations of INC members on hundreds of buses from various parts of Luzon from proceeding to the capital, averting a traffic gridlock on Edsa and helping ease growing tensions in the metropolis.

The announcement by INC general evangelist minister Bienvenido Santiago to end the protest was aired on the religious group’s INCTV and Net25 at 9 a.m. Monday. Also canceled were marches in Cebu and Davao cities scheduled at noon.

“We wish to tell you all that Iglesia and the government have talked, and both sides have been enlightened. So everything is peaceful,” Santiago said.

“This peaceful assembly that we mounted since Thursday afternoon is ending peacefully this Monday morning. Thanks be to God. To God be the glory. Long live Iglesia ni Cristo,” he added.

The announcement came after Malacañang and INC officials reached some kind of understanding, details of which have yet to be disclosed to the public.

The sect mounted the protest over what it called undue attention by the Department of Justice to an illegal detention case that an expelled minister filed against INC council members.

The rally crowd, which began to amass on Edsa on Friday night, peaked at 20,000 early Monday from 1 to 2 a.m. On Sunday, the crowd spilled over the permitted rally zone on the Edsa-Shaw crossing in Mandaluyong City, reaching the intersection of Edsa and Ortigas Avenue as well as the flyover and underpass on the Edsa-Shaw intersection, paralyzing traffic on Edsa for hours.

Mandaluyong Mayor Benhur Abalos said his decision to allow the protesters to stay at Edsa-Crossing beyond the time stated in the permit was not a special accommodation but was granted for “humanitarian reasons.”

Despite the public outcry against inconveniences caused by the rally over the weekend, the Philippine National Police considered it peaceful.

When the news came about the cancellation of the protests, members of the group at an INC compound in Cebu City shouted in celebration, and considered it a victory for the church.

Romel Pañares, a minister designated as spokesperson for the activity in Cebu province, said those who were still on their way were told about the cancellation of the activity and were advised to return to their homes.

With Santiago’s announcement, a number of INC members who went to Cebu City decided to go to the mall or to renew acquaintances and to make new friends.

While some started leaving the church, others remained behind as they made plans on what to do with the free time created by the cancellation of the activity.

INC members from Pangasinan province began their long trip back home on Monday following the announcement.

“We are tired but happy. At least we were able to show our support for our church. We are stronger now,” said an INC member from Sta. Barbara town, who asked not to identified.

But a former Pangasinan town councilor, who was in Metro Manila on Monday morning, said droves of INC members had been arriving in a shopping mall on Edsa.

“I suspect they are from [northern Luzon] as many are Ilocano-speaking. They are going inside the mall but I overheard someone instructing them to be in their vehicles at noon,” the former councilor said in a text message.

He said INC members appeared to have just arrived in Metro Manila and may have only heard about the INC announcement on their way to the capital.

The INC member from Sta. Barbara said members traveled by batches to Metro Manila starting on Thursday. She said her batch left her town at 7 p.m. on Sunday and proceeded to the Edsa-Shaw area, where most of the INC members had massed up. She said the church shouldered the travel and food expenses.

“It’s as if we went there to watch a concert,”she said.

But another INC member from Dagupan City said what was important was that they were able to show their faith and stand as true children of God. “I joined them in our fight for out faith. We are moving as one body,” he said.

On Sunday, an INC official said members either traveled to Metro Manila using their own vehicles or through rented vans and buses.

Another INC official in Pangasinan said church members were ready to mass up in front of the offices of the DOJ in Manila and ABS-CBN television station in Quezon City, had the protest continued on Monday.

The official said the group from Pangasinan would have stayed in Metro Manila until 1 p.m. Monday as the bus hired by the church was good for only 24 hours. The bus, where the church official and her family boarded, left the capital Lingayen town at 7 p.m. Sunday.

Pangasinan is divided into three INC ecclesiastical districts, with an estimated 100,000 members in 2010, according to the Philippine Statistical Authority.

In Central Luzon, Chief Supt. Rudy Lacadin, regional police director, said around 3,000 INC members from the region left for Metro Manila on Sunday night. They left in batches of about 200, riding buses and jeepneys, identified by INC flags.

By boat they came from Bohol, Negros Oriental and Negros Occidental provinces and by bus, truck, jeepney and private vehicle from other parts of Cebu province to converge in Cebu City.

Their counterparts in Mindanao, who came by buses and other modes of transportation, gathered in Davao City.

At least 10,000 INC members in the Visayas had converged in Cebu City since Sunday evening for the rally scheduled for Monday noon.

The contingents came from the different towns and cities of Cebu, Bohol, Dumaguete City in Negros Oriental; and San Carlos and Bacolod City in

The INC members were told to gather at the INC church on General Maxilom Avenue at 9 a.m. They were supposed to march on Plaza Indepedencia at noon.

The bulk of the members came in buses, trucks, passenger jeepneys and private vehicles from all over Cebu, and from Negros Island while those from Bohol came by fast watercraft and slow boats.

They prepared to start marching, holding INC flags and flaglets, placards bearing signs similar to those seen at the protest rallies at Padre Faura in Manila and on Edsa in Mandaluyong City.

At 9 a.m. Monday, Cebu City Fire Marshall Rogelio Bongabong, an INC member, estimated the crowd at the compound of the church to have reached 5,000. The figure could be higher because several contingents were still arriving at that time.

The rest of the expected 20,000 members were still on their way to Cebu City.

They slept on the bench and under the trees at the historic plaza. Generoso estimated the crowd at the plaza at more than 1,000.

Joy Tumulak, Cebu City Traffic Office executive officer, said there was traffic congestion on General Maxilom Avenue because of the huge crowd that left and arrived at the INC compound.

At Plaza Independencia, Charito Dumay, 55, and Adelaida Onde, 57, from Clarin, Bohol, said, they were part of the contingent from Tubigon, Bohol.

There were also contingents from Candijay, Bohol, at Plaza Indepedencia.

The INC members from San Carlos and Bacolod cities said they were provided with food when they arrived in Cebu City. They said all the expenses were shouldered by the church.

An INC member from the City of San Carlos said he and the others would take advantage of the cancellation of the rally. “We will go home later tonight. We would like to go around the city first,” he said laughing.

INC minister Ronilo Riego, who traveled from the town of Alubijid in Misamis Oriental to Davao City, said: “…(W)e are very happy because we were able to convey to the government our message. We do not want to cause any disturbance as long as the government will not [interfere] with our religious freedom.”

An elderly couple who traveled from Wao, Lanao del Sur province, sat on the back of a truck and were were smiling after the announcement that the protest action had been lifted.

Asked what their gains were, the couple just looked at each other and said: “We finally have justice now. That is what we were told.”

Ready to die for INC

Another member from General Santos City was shouting with joy and was waving a flag.

“This is a message that INC is united. We will do whatever our leaders will tell us to do because we believe in them. If they will tell me to die for the Iglesia I will be more than willing to offer my life,” the member said.—Gabriel Cardinoza and Yolanda Sotelo, Inquirer Northern Luzon; Tonette Orejas, Inquirer Central Luzon; Jhunnex Napallacan, Inquirer Visayas; Karlos Manlupig, Inquirer Mindanao; Jaymee T. Gamil and Jovic Yee in Manila

Read Next
No deal struck with Iglesia, says Palace
EDITORS' PICK
House energy committee chair Arroyo bats for cheap electricity
The Best Tech Gifts For The 2022 Holidays
The vivo Y16 makes the season of giving more thoughtful for the whole family
Fare card prices soar amid shortage
US has ‘many requests’ on Edca, Bongbong Marcos says
Bongbong Marcos: Oil search in West PH Sea may skip ‘gov’t to gov’t’ talks
MOST READ
SSS: Pensioners 13th month, year-end benefits to be released first week of December
LOOK: Kris Aquino visited by ‘Kris TV’ sidekick Darla Sauler in US
US has ‘many requests’ on Edca, Bongbong Marcos says
Not just a consultant, military says of slain Red leader
Don't miss out on the latest news and information.