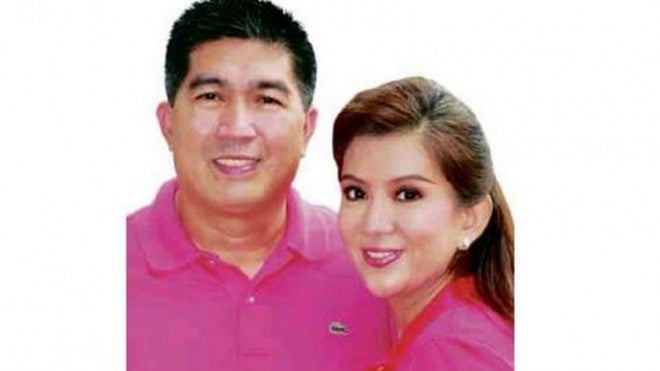 San Jose del Monte City Rep. Arturo Robes and his wife, who were among those implicated in a new pork barrel scam complaint, claimed it was the supposed witness who misused the congressman’s Priority Development Assistance Fund (PDAF).

In an interview on Sunday in Quezon City, Robes and wife, Florida, who is also his chief of staff, said they entrusted their former staff member, Bernadette Ricalde, with all PDAF-related matters since the congressman began his term in 2007 until 2011, when Ricalde was fired for alleged anomalous transactions.

“We did not steal, we did not take the people’s money. We did not have anyone killed. We did no wrongdoing,” said Florida, who spoke through tears during the interview.

She was referring to Ricalde’s claim connecting the ambush slaying of her husband, Chief Insp. Romeo Ricalde, head of the Northern Police District’s antidrug division, in 2013 to the allegedly questionable pork barrel disbursements made to two nongovernment organizations (NGOs) that were linked to Robes.

“Why did they connect (the pork barrel issue) with murder? That hurt the most because my children saw that (front-page news),” she said, adding that the Criminal Investigation and Detection Group (CIDG) never linked them to the ambush.

Robes said that as far as he knew, the funds he disbursed from his PDAF allocation were “properly liquidated and implemented.”

The couple decried that they were being singled out in a trial by publicity, alleging that both Ricalde and her lawyer, Levito Baligod, were working with their political opponents.

Robes has finished three consecutive terms and will challenge incumbent San Jose del Monte Mayor Reynaldo San Pedro in next year’s elections, while his wife, Florida, will run for his legislative position.

Baligod, former lawyer of pork barrel scam whistle-blower Benhur Luy, last week asked the Ombudsman to investigate 20 incumbent and former lawmakers, including Robes, for alleged misuse of P500 million in pork barrel funds based on the testimonies of Ricalde and three other witnesses.

Robes was accused of diverting P3 million of his PDAF through the NGOs WorkPhil and Sagip-Buhay, which Ricalde claimed were organized by Florida Robes and other staff members.

In her sworn statement, Ricalde said WorkPhil and Sagip-Buhay received about P200 million in pork barrel funds from several members of the House of Representatives and the Senate and that the money was deposited in the personal account of one of Robes’ employees, Michelle Imperial.

But according to the Robes couple, it was Ricalde who organized and controlled these foundations.

They said they were aware that Ricalde organized WorkPhil but added they did not know about Sagip-Buhay’s activities.

“She (Ricalde) handles the partner NGOs and the foundations,” Robes said.

“I gave her the freedom and liberty to choose. That’s how much we trusted her that she will not get us in trouble,” she added.

Florida said she and her husband fired Ricalde in 2011 when they received the notice of disallowance from the Commission on Audit (COA) about the PDAF disbursements.

She said she also learned then that Ricalde had an estafa case involving P89 million. “Nobody could open her cabinet. When we opened it, it was empty. Where were the liquidation documents?”

Despite the anomalies, the Robeses decided against suing Ricalde then “because she was a part of our life.” Florida said Ricalde had been with them on and off since before Robes became congressman in 2007.

But she recently sued Ricalde for libel for linking her to the ambush of her husband.

In August, WorkPhil filed a case of estafa with falsification of documents against Ricalde in the Quezon City prosecutors’ office.

Robes’ lawyer, Dennis Manalo, said Ricalde forged the lawmaker’s signatures, falsely represented to people that WorkPhil was a dummy of the congressman and “used her position to obtain loans from private contractors and suppliers in exchange for contracts.”

“Disallowance of disbursements by the COA is not synonymous to or the equivalent of malversation of public funds,” Manalo continued, adding that the COA disallowance is still under appeal.

“The bottom line here is that Ricalde is not a whistle-blower but a con artist motivated by a personal agenda,” he said.—Dona Z. Pazzibugan