Pimentel: It’s a case vs persons, not Iglesia 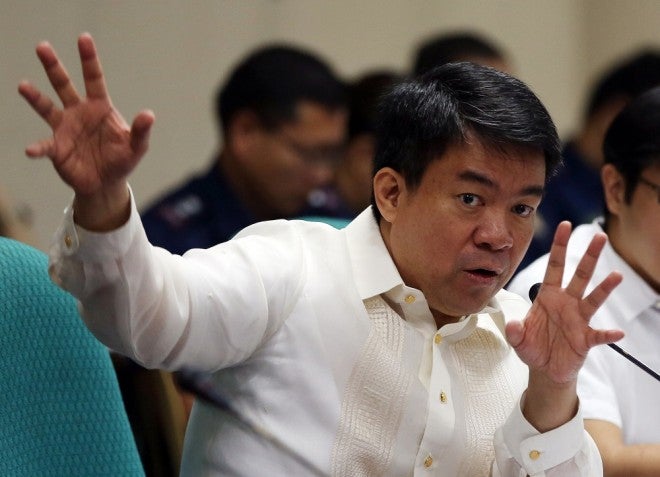 The investigation by the Department of Justice (DOJ) of a criminal complaint filed by an expelled Iglesia ni Cristo (INC) minister against leaders of the Christian sect is not an attack against the group and has nothing to do with religion, Sen. Aquilino Pimentel III said on Sunday.

Pimentel said the DOJ should be given a chance to determine whether the complaint of former INC minister Isaias Samson Jr., against the sect’s governing council was actionable, adding that he disagreed with the INC position that the government should dismiss it and not to give it priority.

“I don’t think this is a case against a church but against persons. It’s part of the DOJ’s job to accept the complaint, conduct a preliminary investigation, look at the basic facts whether this violates the Revised Penal Code or any law, or [if it is] a public crime. So you need a formal investigation,” Pimentel said in a radio interview.

Invoking separation of church and state, INC has massed thousands of its followers at the Edsa-Shaw Boulevard intersection in Mandaluyong City to pressure the government to drop the complaint, an offshoot of a scandal involving alleged financial mismanagement by members of the sect’s governing council.

Samson alleged that the council placed him and his family under “house arrest” on suspicion that he was the blogger who exposed the alleged bad business decisions and financial excesses of council members and posted the views of other dissenters on the Internet.

He said he and his family escaped in July and disclosed that at least 10 other ministers were also abducted to suppress dissent in the ranks of INC followers.

At about the same time as the Samsons’ escape, the mother of INC executive minister Eduardo Manalo, Cristina Manalo and brother, Angel Manalo, posted a video on YouTube claiming their lives were in danger and appealing to INC members for help.

The governing council expelled mother and son from the sect for causing division, in a scandal that exposed cracks in the secretive group that governments tolerated for decades because its members voted as one on instructions from their leaders.

The bloc-voting sect aims to bring 1 million members to Edsa on Monday to force the Aquino administration, which is facing national elections next year, to drop Samson’s complaint.

But Pimentel, a lawyer, said the DOJ needed to look into the complaint because it involved serious illegal detention, a nonbailable offense.

He said it was a serious offense considering it involved not only a person’s liberty but also his life.

Pimentel underscored the importance of the DOJ investigation, a process that would determine whether a crime had been committed or if this was an action of a religious group and thus an internal matter.

“If you know the general picture, then you can look into whether this involves freedom of religion or freedom of a person,” Pimentel said.

Rep. Sherwin Tugna of the party-list group Citizens’ Battle against Corruption, said Sunday the DOJ should proceed with the investigation and assign the complaint to a prosecutor “with a long impeccable track record of competence, integrity, impartiality, transparency, and someone who cannot be influenced and cannot be pressured.”

Samson’s lawyer, Trixie Cruz-Angeles, on Sunday warned that politicians who would try to influence the DOJ into dropping or shelving the complaint faced graft and corruption charges.

Angeles cited Sen. Grace Poe, a potential presidential candidate in next year’s elections, who said in an interview with reporters in San Jose City, Nueva Ecija province, on Friday that Justice Secretary Leila de Lima should give priority to other cases and not to Samson’s complaint.

According to Angeles, the antigraft law declares unlawful the acts of a public official who “persuades, induces or influences” another public officer to act in violation of that officer’s sworn duty.

“Now could you repeat your spiel about how the justice secretary needs to focus on other cases and not to take cognizance of the case serious illegal detention filed by [Mr. Samson]?” she said, referring to Poe.

Senators Francis Escudero and Ferdinand Marcos Jr., both looking to run for Vice President, also spoke in favor of INC as the sect massed its members in front of the DOJ building on Padre Faura Street in Manila on Thursday.

Ahmed Paglinawan, another lawyer for Samson, said INC, being a corporation registered with the government, should obey the law.

“[INC] is still, after all, a juridical entity existing by the ‘application/operation of law.’ Violate the law, goodbye, corporation. Goodbye, lawful purpose,” Pagkalinawan said Sunday in a post on Facebook.

INC was registered with the then Bureau of Commerce as a corporation by its founder, Felix Manalo, in 1914. The Securities and Exchange Commission performs most of the bureau’s duties today.

On the INC mass action on Edsa, Pimentel said the sect had a right to assembly and the authorities had the obligation to give them rally permits.

But the mayors should set conditions for the permits to prevent inconvenience to the public, he said.

Bayan Muna Rep. Neri Colmenares said the right of INC members to express their grievance through street demonstrations must be respected, but Samson’s right as a citizen to file a criminal complaint and expect it to be resolved on its merits should also be respected.—Christine O. Avendaño and Jerome C. Aning with DJ Yap