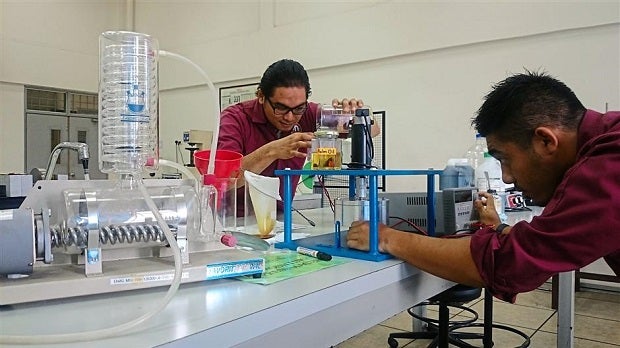 The two men use palm oil as servo valve fluid. The Star/ANN

For two years, there was cooking oil within easy reach of anyone working at this table. It was one of the well-known brands of palm cooking oil, available in supermarkets and sundry shops, and a staple in many Malaysian kitchens.

But far from being a cooking show, this was an entirely different setting: a laboratory in a university in Kulim, Kedah.

A group of researchers from Universiti Kuala Lumpur-Malaysian Spanish Institute (UniKL-MSI) has been getting up close and personal with the humble palm oil on a daily basis.

Since 2013, they have been working on developing a palm-oil based magneto-rheological fluid (MRF) valve—an invention that could be used in place of the conventional servo valve in hydraulic systems.

In their project which is funded by Majlis Amanah Rakyat (Mara) under Mara’s Research and Innovation Grant Scheme (Skim Geran Penyelidikan dan Inovasi Mara), palm oil was used as a carrier fluid in the MRF valve system.

“European researchers have used corn oil and sunflower oil in previous studies. As Malaysia is a leading palm oil producer, we thought it would be a good idea to explore the potential of palm oil in industrial application,” says project team leader Husaini.

In this innovative take on the MRF valve, palm oil is used in place of hydrocarbon oil as carrier fluid.

Referring to the MRF as a “smart fluid”, Husaini explains that its liquid state will transform to a near-solid in milliseconds when a magnetic field is applied.

“This enables the valve to be controlled intelligently without any moving parts to take into consideration, as would be the case in conventional valves,” he says.

The palm oil-based MRF valve’s high precision and compact size rank among its plus points. Additionally, it addresses many of the issues plaguing conventional valves, including friction and internal leakage.

Palm oil is an attractive substitute as it remains stable over a wide temperature range, has low viscosity and is biodegradable.

Husaini is hopeful that this could be further developed as a greener option in the long run, as recycled palm oil could potentially be used for the MRF valve.

While a patent has been filed for this innovation, he says that further research is required to ensure the quality of palm oil-based MRF.

Likewise, the reliability of the mechanical devices to be used in an open environment should be examined in detail.

“We are very proud to have our work acknowledged, particularly in a field that is quite new among Malaysians. The awards serve as motivation that this technology can pave the way for the future of the palm oil industry,” says Husaini, adding that he is grateful to UniKL-MSI dean Prof. Dr. Abu Talib Othman for his support in initiating research in this particular field.

Using this palm oil-based MRF, the team is now working on a few mechanical devices such as damper, clutch and braking systems, underwater propulsion system and molecular dynamic simulation of particle suspension in palm oil.

They have also developed a non-Newtonion viscometer to study the effects of a magnetic field on fluid flow.

“This is pioneer work that explores the use of palm oil as the main material in mechanical devices. So there are many aspects where advanced research is required, especially studies on fluid characteristics,” says Husaini, who hopes that interested agencies would join them in tapping into the potential of palm oil for industrial application.