3rd, last batch charged for pork in NGOs of Napoles 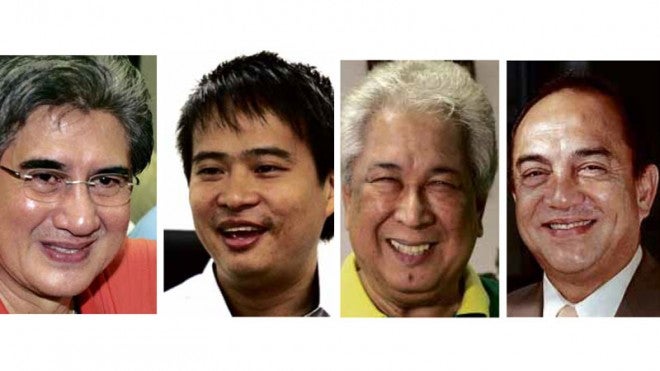 After several postponements, the National Bureau of Investigation finally went to the Office of the Ombudsman on Friday and asked the antigraft agency to charge a third batch of lawmakers, including two political allies of President Benigno Aquino III, accused of taking kickbacks in the P10-billion pork barrel scam.

Villanueva is a close friend of the President. Rodriguez is a congressional ally of Mr. Aquino who headed the ad hoc Bangsamoro committee and sponsored the government landmark legislation on the proposed Bangsamoro Basic Law in Congress.

Finding “sufficient evidence,” the NBI yesterday submitted the results of the investigation of the pork barrel scam by its special task force “for the Ombudsman’s further investigation,” said NBI Director Virgilio Mendez.

“The above lawmakers used their PDAF (Priority Development Assistance Fund, the official name of the pork barrel) in illegal transactions with Napoles’ nongovernment organizations (NGOs) to enable themselves to profit from the simulated disbursements and utilization of their PDAF,” the NBI complaint stated.

“This is really the third and final batch insofar as the Napoles NGOs are concerned for the 2007 to 2009 COA (Commission on Audit) special audit report,” Justice Secretary Leila de Lima said.

Their representatives were also charged, along with heads, officials and employees of the implementing government agencies found to have been allegedly involved in the fund diversion, including National Agribusiness Corp., National Livelihood Development Corp. and Technology Resource Center.

The NBI said the basis for the recommendation to prosecute were documents from the Department of Budget and Management (DBM) scrutinized by the NBI investigating team.

According to the investigators, the lawmakers themselves requested the funds involved in the scam. The requests were addressed to the House of Representatives committee on appropriations and the Senate committee on finance. The lawmakers’ requests for funds were then endorsed to the DBM.

The same requests also show the name of the implementing agency as the recipient of the funds which eventually ended up in Napoles’ NGOs.

De Lima explained that those named in the NBI complaint were still “not respondents” in the case, as they will still have to be investigated by the Office of the Ombudsman.

In the end, it will still be up to the Ombudsman whether the charges will be filed in court, she said.

“Just like the first and second batches, this will be the call of the Ombudsman whether or not to go ahead with these cases,” De Lima said.

“In other words, this will not go straight to preliminary investigation. It has to go through the Field Investigation Office. The Ombudsman, through the FIO, must be able to evaluate and assess the sufficiency of the evidence involving these nine lawmakers,” she said.

She attributed the delays to the investigation of claims of forgery surrounding signatures on documents, which the NBI described as “material in the release of the PDAF… to Napoles NGOs.”

The justice department had announced in June 2014 that a third and last batch of pork barrel scam cases was already set to be filed.

“These charges were always going to be pursued, but they were just delayed because of issues on the genuineness (authenticity) of the signatures,” De Lima said.

“So we had to address that issue first before going ahead rather than separating the issue on the signatures,” she explained.

In its executive summary, the NBI cited the findings of its Questioned Documents Division (QDD) that “signatures did not match the specimen signatures” of lawmakers who requested an examination of the PDAF documents they supposedly signed in approval.

The QDD found that the documents and the specimen used for comparison “were not written by one and the same person.” Such was the case for incumbents Estrella, Ortega, Rodriguez and Tesda’s Villanueva, who requested a check of the authenticity of their supposed signatures.

“Also, it’s a matter of defense on the part of these respondents (who are not yet respondents)” De Lima said.

The NBI said the matter of the authenticity of the signatures “will still be subject to the scrutiny of the Sandiganbayan in the event that the Ombudsman decides to file the criminal cases in court.”

“In any event, malversation is also committed through negligence, in which case the signatures of the lawmakers are not necessary to prove that they allowed, through their negligence, the misappropriation and misuse of public funds entrusted to them,” said the NBI complaint.