UP dorm woes due to more students, miscommunication 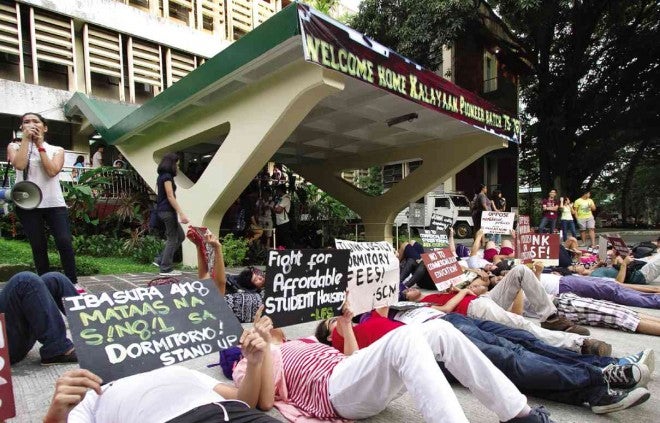 UNSHELTERED A “lie-in” protest on UP Diliman campus on Friday decries the inadequate dormitories and rates deemed too steep for students from low-income families. ALEXIS CORPUZ

THE UNIVERSITY of the Philippines (UP) accepted 800 more freshmen than usual this school year on its Diliman campus, leading to problems in class registration and dorm applications, UP Diliman chancellor Michael Tan admitted on Friday.

But Tan took exception to social media reports that the situation had resulted in “homeless students” on campus.

“The term ‘campout’ which they have been using (in the reports) is inaccurate. Like the photo posted on Facebook, that was Stand-UP doing a vigil,” he said, referring to a political student organization in the premier state university.

According to Neil Martial Santillan, vice chancellor for student affairs, the appeals of the last batch of 300 students who were earlier turned down have been resolved and that they were already accommodated in the dormitories as of Thursday.

Santillan traced the issue to a “miscommunication” in the application and appeals process.

There are a total of 3,725 dormitory slots in UP Diliman, according to Santillan. After the processing of three batches, 3,018 or 81 percent of these slots have been filled.

The administration was able to accommodate all 300 appeals and still had vacant slots in the Acacia and Sampaguita dorms, Santillan said Friday.

Around 15 students coming from the provinces and awaiting space at the dorms had been forced to stay at the All UP Worker’s Union Office, Pangalangan said. Others slept in the Sunken Garden, the Infirmary and convenience stores while waiting for the result of their appeals.

Pangalangan also assailed the “inaccessible” monthly rates at the newly opened Acacia dorm, ranging from P1,500 to P3,000. The other dorms charge P350 to P600 a month.

While there was an increase in accepted freshmen, “there was no adjustment by the administration in terms of academic slots and student housing, that’s why we have this problem,” Pangalangan said. “Our analysis is that the increase is a buffer for the fact that there’s the K to 12 program, wherein we expect that in the next two years the volume of enrollees will greatly decrease.”

K to 12 refers to the expanded basic education program that adds two years to the previous elementary and high school term totaling 10 years.

But when told of Pangalangan’s view, Tan said: “That never occurred to me.”

“There are more freshmen this year for many different reasons. [The] no-show rate is lower. We worked harder to match Upcat (UP College Admission Test) passers to the degree programs,” the chancellor said. “We analyzed the figures. It caused some problems with getting classes so we are still going to open new classes next week and we’ll extend the deadline for registration.”

“In dorms, it did add a bit of a problem in the application but there are no homeless students,” Tan stressed.

Student groups have organized a series of protest actions and on Friday morning brought mattresses to symbolize the inadequate lodgings for students.

Tan said the UP administration had set a target to increase dormitory slots to 6,500 in the next few years.

It was also looking at subsidizing the payment of students assigned in Acacia but bracketed for full discounts under the socialized tuition system, he said.