Villanueva is a member of the administration coalition and is eyed to run as senator for Aquino’s liberal party in 2016. He is the son of Jesus is Lord founder Bro. Eddie Villanueva.

Villanueva was appointed Tesda Director General with a Cabinet rank by President Aquino. He served as Citizens Battle Against Corruption (Cibac) Representative from the 2001 to 2010.

Rodriguez is an administration ally in Congress.

“The above lawmakers used their PDAF (Priority Development Assistance Fund) in illegal transactions with Janet Lim Napoles’ NGOs to enable themselves to profit from the simulated disbursements and utilization of their PDAF,” the complaint stated.

The lawmakers, according to the complaint allegedly received 40 to 60 percent of the total amount used by Napoles’ NGOs. 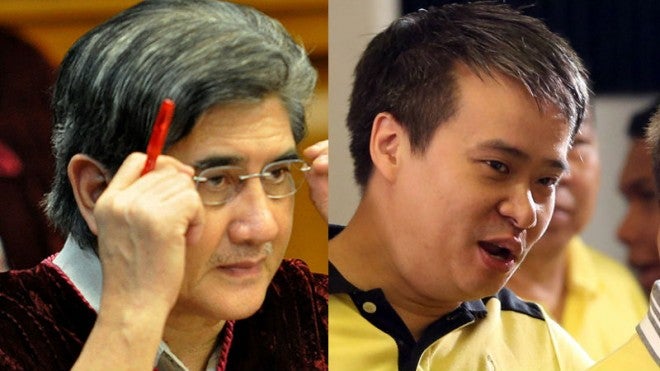 “This is the lawmaker’s share/commission/kickback in the misuse and conversion of his PDAF through the implementation of ghost projects by the Napoles NGOs,” the executive summary of the complaint stated.

Records of the kickbacks allegedly received by the lawmakers directly or through their representative were stated in the records of whistleblower Benhur Luy.

Based on the complaint, the lawmakers received the following kickbacks:

“The utilization of almost 100 percent of the PDAF was for the purpose of giving everyone involved his share of the pie. Only a measly amount of the PDAF was actually used for the legitimate intended purpose of supplying knapsack sprayers, vegetable seeds, livelihood materials, liquid fertilizers and training to identified beneficiaries,” the Executive Summary further stated.

She also faces multiple plunder, graft and malversation cases before the Sandiganbayan.

Justice Secretary Leila de Lima said this will be the last batch of cases that will be filed in connection with the PDAF.

“This is really the third and final batch in so far as the Napoles NGOS are concerned for 2007 to 2009 COA (Commission on Audit) special audit report,” de Lima said.

The filing of the third batch has been delayed several times since last year.

Early this year, de Lima said the third batch is no longer a priority of her office. But after getting flak from various sectors, she took back her words and said the case will be filed soon.

READ: De Lima: 3rd batch of PDAF cases may not be included on DOJ priority list

De Lima also denied that the reason for the one year delay of filing the case was because of the administration allies subject of the investigation.

“That is not true kasi sa second batch meron din dun. So, this one ay meron din. But that is not the reason na may nadelay. The reason for the delay is the issue of the genuineness of signatures. We wanted to address that issue para malinaw,” de Lima added.

De Lima added that like in the first and second batches of complaints they filed with the Office of the Ombudsman, it will still be subject to a fact-finding probe to determine if there is a need to undergo preliminary investigation where all the 40 respondents including the 9 lawmakers will be required to answer the allegations.

(Editor’s note: The article was updated to state that Representative Conrado Estrella III is the incumbent Abono congressman, as well as former Pangasinan congressman. KS)