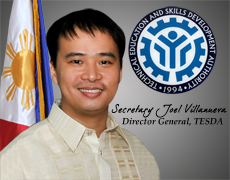 MANILA, Philippines — Technical Education and Skills Development Authority (Tesda) Director General Joel Villanueva said he did not get a single cent from his pork barrel allocation during most of the Arroyo administration, so he could not have been involved in the latest pork barrel scam.

He urged the National Bureau of Investigation (NBI) to dig deeper to find out who forged his signature in the documents that implicated him.

Villanueva was CIBAC partylist representative for nine years until 2010, when he was appointed by President Aquino to head Tesda.

“During the impeachment years (against Arroyo) I don’t recall receiving a single cent from the Arroyo administration to the CIBAC partylist,” Villanueva said.

“They already admitted they are forging signatures, so I hope the investigating authorities will dig deeper and hold liable those who will be proven guilty,” he added.

According to the NBI investigation, 28 lawmakers — five senators and 23 representatives — allegedly made available their pork barrel funds to dummy NGOs put up by businesswoman Janet Lim-Napoles for alleged ghost projects worth P10 million over the past decade.

Documents provided by whistle-blowers showed two instances both on Nov. 9, 2007 where Villanueva’s Priority Development Assistance Fund (PDAF) worth P1.3 million and P3 million were released to the Technology Resource and Livelihood Center and channeled to one of the bogus NGOs concocted by Napoles’ staff.