Praying on the beach: Pope Francis’ program in Brazil 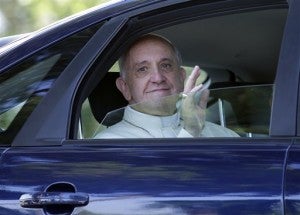 VATICAN CITY — From praying on the beach to visiting a slum, Pope Francis’ July 22-28 visit to Brazil — his first foreign trip — will have several historic moments.

Here are the main highlights of the trip for Latin America’s first pope in the world’s most populous Catholic country:

— Meet the President: Shortly after arriving at 1900 GMT on July 22 the pope is set to meet President Dilma Rousseff, a former Marxist guerrilla. The president was once an avowed atheist and supported the legalization of abortion, although her views have changed since her years of militancy. She now opposes gay marriage and is in favor of abortion only in cases of rape or when the mother’s life is in danger.

— Marian sanctuary: Francis starts his trip proper with a visit to Our Lady of Aparecida shrine, halfway between Rio de Janeiro and Sao Paulo, on July 24. The pope is a devout follower of the Virgin Mary and visited a Marian church in Rome the day after he was elected leader of the world’s Catholics.

— Copacabana prayers: The pope addresses crowds of young people expected on July 25 on Copacabana beach. Brazilian officials say they expect up to 1.5 million people to come for the World Youth Day celebrations — lower than the number initially estimated by organizers.

— Manguinhos slum: Also on July 25, the pope is set to walk the alleys of a “favela” that was only wrested from the control of drug gangs last year. The Vatican has said he intends to meet with families in the slum, home to about 35,000 people, which is located near the city’s main airport. Francis has said he wants a “poor Church for the poor” and has called on Catholics to bring God’s message to the “peripheries” of the world.

— Prison visit: Francis is expected to visit young inmates in a Rio prison on July 26. The then Jorge Bergoglio was well known for his social outreach when he was archbishop of Buenos Aires and has continued it in Rome. In March, he washed the feet of 12 young offenders including a Muslim girl at a Rome prison in an unusual take on a traditional Easter ritual.

— Vigil and Mass: The visit culminates with a gigantic prayer vigil on July 27 followed by an outdoor mass in Campus Fidei in Guaratiba region near Rio. The camp-out is a feature of World Youth Day that has earned the events held once every two years the nickname of “Catholic Woodstock.”