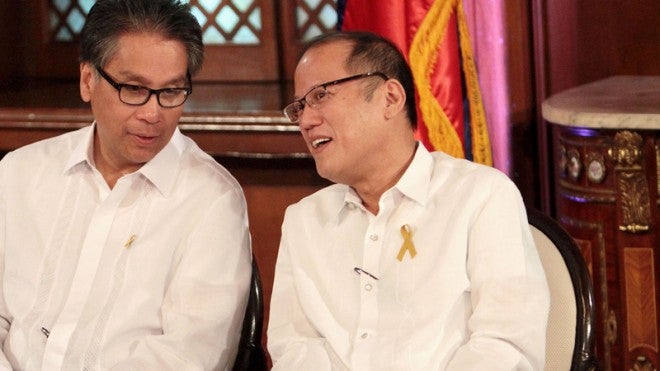 Interior Secretary Mar Roxas on Saturday dismissed criticisms that he would merely be “Noynoy 2.0” after he was endorsed by President Aquino as the administration coalition’s presidential candidate in 2016.

“What is wrong with Noy 2.0?” Roxas told reporters after the Mass commemorating the sixth death anniversary of former President Corazon Aquino at Manila Memorial Park.

After President Aquino endorsed Roxas’ presidential bid, Bayan secretary general Renato Reyes said Roxas clearly only wanted to be “Noynoy 2.0,” noting the “symbols and colors” of the endorsement gathering at Club Filipino in Mandaluyong City and his speech.

More of the same

Reyes added that people “do not want a Noynoy 2.0,” saying reform program of Mr. Aquino was a “sham.”

But Roxas defended the accomplishments of the Aquino administration.

He said the country was now in a place never reached or imagined before in five years because of President Aquino.

“I don’t need to enumerate the statistics and proof but our country’s standing before the people and the world is now different than before,” he said.

“I think we know, and the rest of the country knows, that what P-Noy has done, we have to continue them… I can contribute my experience and what I have done as well to enhance and strengthen the straight path that has been started,” Roxas said.

Roxas said Sen. Grace Poe remained one of the people he hoped would agree to be his vice-presidential running mate.

“The short answer is yes,” Roxas said when asked if Poe remained on the Liberal Party’s list of potential candidates for Vice President.

Roxas expressed hope that the public would accept and understand that having Poe as the coalition’s vice-presidential candidate is being considered.

President Aquino had spoken several times with Poe about a possible coalition but all the meetings failed to bring any definitive decision.

Poe is the front-runner in the presidential polls, followed by Vice President Jejomar Binay.

Roxas is in third place in the Social Weather Stations poll and fourth, behind Davao City Mayor Rodrigo Duterte, in the Pulse Asia survey.

Poe is the frontrunner in presidential surveys, with Vice President Jejomar Binay a close second. Roxas, on the other hand, lags behind the polls prompting President Aquino to urge supporters to campaign hard for Roxas to make him known to more people.

Roxas said that President Aquino would still spearhead the meetings with possible vice presidential candidates of the Liberal Party.

“We will get there. Honestly, I have not spoken to anyone. I am not speaking to anybody yet because I don’t want to preempt the President. Perhaps the talks and the deep reflection (on who will be the vice presidential candidate) will happen in the coming days,” Roxas said.