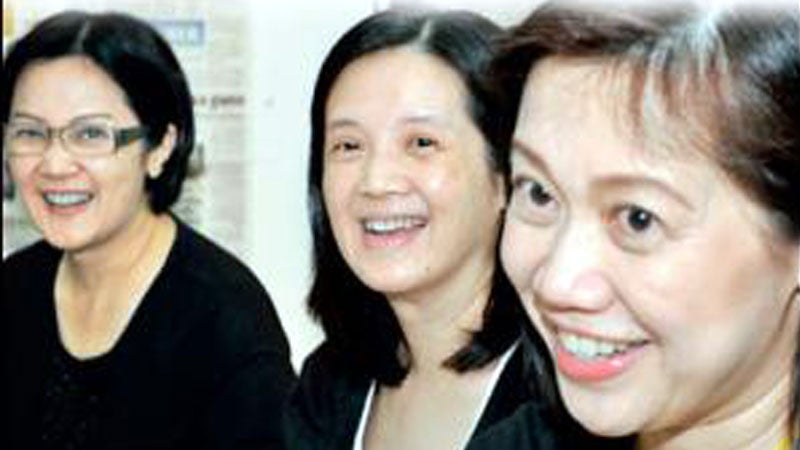 Was it only a year ago that presidential sister Kris Aquino revealed that she and her sisters declared their openness to support the presidential bid of Vice President Jejomar Binay?

But now, a month after Binay quit the Cabinet and started his bare-knuckled attacks on the President, the Aquino sisters revealed that they are not backing their longtime family and political friend in 2016.

Presidential sisters Aurora Corazon “Pinky” Aquino-Abellada and Maria Elena “Ballsy” Aquino-Cruz confirmed that the family could not support Binay who called their brother’s government “palpak at manhid” (insensitive and bumbling).

“He (Binay) has spoken, it’s all different now,” Cruz said in a phone interview with the Inquirer. “Binay is still our friend, but he is going against our brother.”

Abellada said she and her sisters were deeply hurt by Binay’s broadsides.

“I am only human. As Ballsy said, the difference is very clear. We just have to respect each other,” Abellada said in an interview with reporters during the Bulong Pulungan sa Sofitel on Wednesday, during the launch of the second of a series of Cory Aquino stamps in memory of her sixth death anniversary on Aug. 1.

Abellada also debunked a long-standing rumor that she and her sisters dumped their brother’s running mate, Interior Secretary Mar Roxas, and voted for Binay as Vice President on the ballot.

“Up to the end, we were Noy-Mar. My feeling is that these are just part of the intrigues. As far as the sisters are concerned, we were really stuck to the ticket and we made it clear to Secretary Mar,” Abellada said.

For her part, Cruz said she was hopeful she would keep her ties with the Vice President’s children.

“I can’t drive away or throw away a person we have been together with for a long time just because of what is happening now. I try to understand that is his role. His other children who have been nice, I really want them to be friends for life,” Cruz said.

Abellada also clarified that she and her sisters had never declared their support for Binay’s presidential bid. “Last year, we were hoping for him not to run so he would remain an ally of the President,” Abellada said.

Cruz revealed that when the media reported that the sisters were widely perceived as favoring Binay as their brother’s successor, the sisters got an avalanche “of text messages asking us: How can you support someone so corrupt?”

In Aug. 7, 2014, shortly after Binay floated the possibility of running under a unity party with the Liberal Party (LP), Kris revealed on her talk show that she and her sisters were leaning toward supporting Binay in 2016.

“My sisters and I have been talking about it [LP adopting Binay], and we say that if this can bring about unity as … we’re not enemies … and if he continues what Noy has started, why not?” the youngest of the Aquino siblings said in Filipino.

Two weeks later, the Senate blue ribbon subcommittee started the first of its 22 hearings that uncovered allegations massive of corruption, rigged bidding, kickbacks, dummies, and unexplained wealth against Binay and his family.

In June 22, the Vice President’s daughter, Makati Rep. Abigail Binay, brought Binay’s terse resignation letter to the President. A few days after, Binay held a press conference where he launched a tirade against his former political ally.

In an interview with reporters after a speaking engagement on Wednesday night, Binay said he respected the position taken by the Aquino sisters.

“On my part, we will continue to be the best of friends in spite the fact that we might be coming from different directions in the coming elections,” Binay said. With a report from Christine O. Avendaño