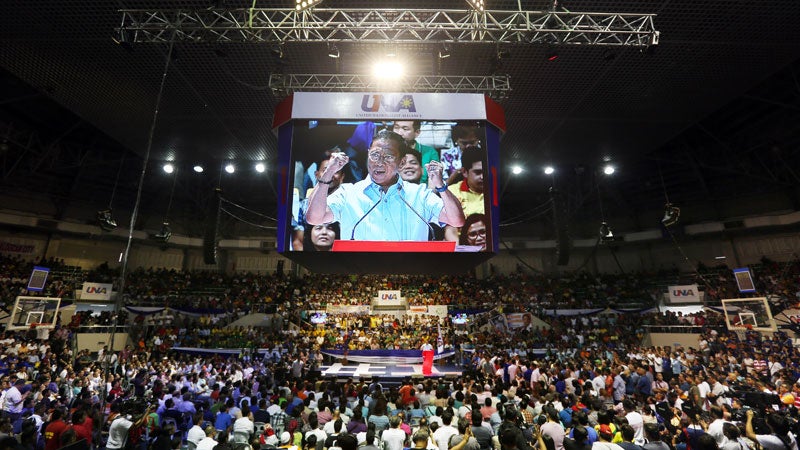 FROM FRIEND TO FOE Vice President Jejomar Binay added “tamad, usad-pagong at teka-teka” (lazy, slow and indecisive) to describe the Aquino administration at the launching of the main opposition party, United Nationalist Alliance, at Makati Coliseum. He called the administration “palpak” (bumbling) and “manhid” (insensitive) after he resigned from the Aquino Cabinet last week. MARIANNE BERMUDEZ

Where is the government?

Vice President Jejomar Binay repeated this sentence throughout the 15-minute speech in Filipino as he delivered his sharpest words yet against the Aquino administration at the launch of his political party on Wednesday in Makati, the city that the Binay family has controlled for almost 30 years.

He devoted a large part of his stinging and emotionally charged speech lambasting the government, at one point describing it as an association of “tamad, usad-pagong at teka-teka (lazy, slow and indecisive)” people.

“After five years, so many are still without jobs, hungry, ill and with no one to turn to, youths who cannot go to school, rampant crime and illegal drugs in the community. Poverty is widespread,” the Vice President said.

“The nation asks: ‘Where is the government?’” he said, addressing the crowd from a glowing red lectern shaped like the No. 1, resembling the digit in the logo of the United Nationalist Alliance (UNA).

Binay noted that until now no charges had been filed against the killers of the 44 members of the police Special Action Force in Mamasapano, Maguindanao province, on Jan. 25. (Seventeen fighters of the Moro Islamic Liberation Front and five civilians also died in the clashes.)

Binay kept repeating the phrase “palpak at manhid (bungling and insensitive),” which he first used last week in explaining his split with the Aquino administration.

“UNA is not an association of the bungling and insensitive,” he said. “It is not a group of people who are lazy, turtle-paced, and hesitant in facing the nation’s problems.”

The Vice President said that should UNA make any mistakes, it would own up to them immediately. “We will not blame or accuse others. We will own up to the responsibility with humility.”

Apparently taking a dig anew at Sen. Grace Poe, who has overtaken him in recent surveys on voters’ choice for president, Binay said his party was made up of people with “experience and not newbies just studying governance and public service.”

He said the party would respect the Constitution and always let the law prevail.

Binay assumed the chair of the newly formed political party.

Tiangco said Binay’s speech set the tone for his campaign for the presidency in 2016.

“This kind of governance cannot continue. They are for continuing the legacy. What we’re saying is we should not continue this,” he said, alluding to the Aquino administration’s touted tuwid na daan (straight path) governance.

Tiangco said Binay rightly pointed to the problems facing the nation, such as the troubled Metro Rail Transit system and the slow rehabilitation of the places ravaged by Supertyphoon “Yolanda” (international name: Haiyan) in 2013.

Binay’s son, Makati City Mayor Junjun Binay, who stepped down on the strength of a suspension order by the Ombudsman, appeared minutes after the program started.

He waved to the crowd and was met by cheers inside the 3,000-seat auditorium, which was filled to capacity.

But the loudest cheers were reserved for UNA’s most famous member: Pacquiao. “We have a right to choose who’s in our heart,” he told reporters when asked if he was afraid of reprisal from the administration.

He said he was still in the process of deciding whether to run for senator.

Asked if he would campaign for Binay, Pacquiao was evasive: “That depends. We have not talked about that. I am here to support the party declarations.”

Notably absent was former President and now Manila Mayor Joseph Estrada, one of the three pillars of UNA, along with Binay and detained Sen. Juan Ponce Enrile.

Binay spokesman Mon Ilagan said the former President had a prior engagement but acknowledged that the latter was “contemplating” a number of issues, such as possibly supporting Senator Poe, the daughter of the late Fernando Poe Jr., or running for President again himself.

Tiangco said a city mayor had plenty of responsibilities and would not take Estrada’s absence against him. “None,” he replied when asked if he was concerned Estrada would end up supporting Senator Poe.

Replying to the Inquirer, Ejercito said he went to the party launch “as a friend of Binay.”

Ejercito said it would be a problem for him if Poe would run for President against Binay.

The atmosphere at Makati Coliseum was festive, a cacophony of drums and cymbals filled the air and stage lights flickered around the auditorium.

Makati residents and UNA members from the provinces turned up in droves and by the busload, many wearing campaign shirts bearing Binay’s name and slogans.

The emcees spent the first few hours acknowledging the politicians in attendance, along with their constituencies.

Binay’s combative words came as a surprise to the media. Ilagan, a few hours before, said Binay’s speech, would be “not as fiery as before.”

“What you will hear now are the programs, the vision, the plans, of UNA as a political party,” he said. “The speech of the VP will have a more positive theme this time.”

Tiangco said he was surprised by the content of the Vice President’s speech.

“I didn’t expect it would go like that. I didn’t see the final speech. We were busy in the organization. I don’t know who wrote it,” he said.

“What we should ask is: ‘Did he speak the truth?’ … No one will argue that the problems he mentioned are the problems being felt by people,” he said.

Tiangco said there was no plan to incite the people’s anger against the government.

He said Mayor Binay’s suspension had nothing to do with the elder Binay’s fiery words.

Liberal Party stalwarts scoffed at Vice President’s stabs at his former colleagues in the Aquino Cabinet.

“What a beautiful self-description,” Speaker Feliciano Belmonte Jr. said in a text message.

Caloocan Rep. Edgar Erice brushed off Binay’s claims saying that the Aquino administration would not have achieved its glowing economic record by being lazy and indecisive.

“And more importantly, you can’t hit your economic goals if the cost of your projects are overpriced like the P2.3-billion Makati [City Hall] Building II and the P1.2-billion Makati Science High School building,” Erice said.

Calling Binay the “master trapo (traditional politician)”, Iloilo Rep. Jerry Treñas said the Vice President merely “enumerated a litany of promises but he did not explain how he will do it.”

“Makati has a lot of money and a very small population thanks to the big business whose existence predates Binay. But because of corruption a considerable number of communities in Makati are still depressed,” Treñas said.–With a report from Gil C. Cabacungan