The Latest: US, Cuba to open embassies to restore ties 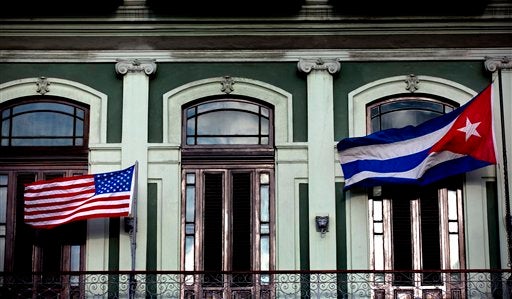 In this Jan. 19, 2015 file photo, a Cuban and American flag wave from the balcony of the Hotel Saratoga in Havana. President Barack Obama will announce July 1 that the U.S. and Cuba have reached an agreement to open embassies in Havana and Washington, a senior administration official said. AP

WASHINGTON— The United States and Cuba have agreed to open embassies in their capital cities, a major step in restoring ties after more than 50 years of hostilities. The latest developments (all times local):

President Barack Obama says the reopening of embassies in Havana and Washington is another demonstration that the U.S. doesn’t have to be imprisoned by the past.

Obama is announcing the formal restoration of diplomatic relations between Cuba and the United States. He’s calling it an “historic step.”

Obama says Secretary of State John Kerry will travel to Havana over the summer to raise the American flag over the embassy.

Obama says the reopening of a full embassy in Havana means American diplomats will be able to engage directly with Cuban government officials, civil society leaders and ordinary Cubans. He’s referring to the freedom of movement for U.S. diplomats that had been a sticking point in negotiations to reopen the embassies.

Obama is also calling on Congress to lift the U.S. embargo on Cuba. He says lawmakers should listen to the Cuban people and the American people who oppose maintaining economic sanctions against the island nation.

The Foreign Ministry in Havana made the announcement Wednesday morning after receiving a letter from President Barack Obama to Cuban President Raul Castro.

The onetime Cold War foes have not had full diplomatic ties for more than five decades.

The United States’ top diplomat in Havana has delivered a letter from the White House to Cuba about restoring embassies in the countries’ respective capitals.

Photographers and video journalists were allowed to document the encounter, but neither he nor Cuban officials spoke publicly.