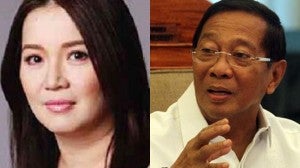 What must they be thinking, those sisters of President Benigno Aquino III, endorsing Vice President Jejomar Binay for Liberal Party standard-bearer? Is he really their honest idea of the person best able to carry on the daang matuwid (righteous path) legacy of their brother?

I got the answer on a recent flight back from Hong Kong when Kris Aquno sat on the seat in front of me in business class. I was already seated when she came on board, followed by a young man lugging her two carry-on suitcases. He assured her, as he deposited her luggage in the overhead rack, that he would be back later to assist her on landing. Then he pushed off to his own seat on the other side of the plane, across from the center aisle set of seats.

I am a retired journalist, no longer inclined to chase after stories, let alone meet deadlines. But that question—the endorsement of Binay—has been nagging at me since the President’s State of the Nation Address. So I decided as it were, to take the bull by the horns, if only to satisfy my curiosity. So I stood up, leaned over and asked.

“Are you really serious about supporting Binay for the presidency?” I said, introducing myself. She was busy writing something, and obviously, I was interrupting. Forthrightly, she replied, “Yes.”

“This is a free country, and I am entitled to my opinion!” She shot back at me. Fair enough. Indeed she was/is.

I mulled that over for a few minutes, and decided it was not the answer I was looking for. I was hoping for some kind of justification, a reasonable explanation for such an apparently outrageous choice. After all, like her, I am also a free citizen of a free country, entitled to ask questions and expect answers from those who shape public opinion, responsibly or otherwise.

“What is it about him that makes you think he can step into your brother’s shoes?” I persisted, like a dog worrying a bone. Perhaps, I was looking to be convinced. Maybe there is something in the man that I am missing, failing to see.

“I like him. It’s a personal choice!” she said.

“But why?” I insisted, and as she started to answer, I thought to further qualify my question: “Is Binay really your honest idea of the person best able to take over and carry on your brother’s daang matuwid legacy?”

“I was in the process of replying, and you interrupted me,” she threw back at me, apparently irked.

“Sorry. My mistake, carry on.”

What? That’s it? Is that really all there is to it? A matter of preference because of present/past favors? A matter of personal gratitude? With Butz Aquino’s announcing his and the other Aquino/Cojuangco clan members’ support, what could be more dismaying for the Filipino public?

The country as fiefdom to be awarded to the most accommodating vassal! And I thought we were living in a more enlightened age, and feudalism is a thing of the past.

What of the welfare of the country? Doesn’t that figure in the equation at all? The encounter raised more questions than it answered.

Postscript: She was gracious enough to agree to a selfie, and she shot it herself using my phone, as my arms could not reach far enough to take in both of us from my standing, leaning-over position. I looked awful in the shot and vanity forecloses any latent desire to be seen photographed with a celebrity. I choose not to use it. It’s a free country after all.

And there you are. The ball’s in your court. Should you honor that endorsement?

Aquino uncles back Binay run in 2016