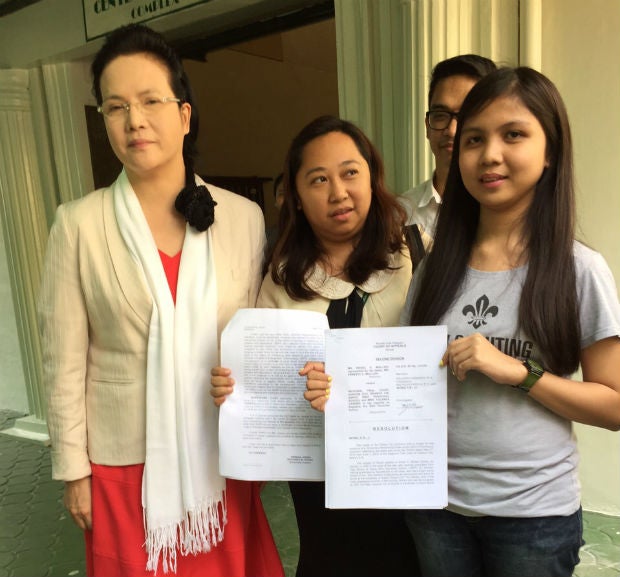 The Court of Appeals Second Division has ordered the Santo Niño Parochial School (SNPS) to issue a Certificate of Good Moral Character (CGMC) to 16-year old salutatorian Krisel Mallari, who criticized the school for its “dirty and dubious” system.

In an order dated July 29, the appeals court through Associate Justice Socorro Inting issued a writ of preliminary mandatory injunction to SNPS that granted the appeal of Mallari.

The appeals court noted that it was imperative that the school issue the CGMC because classes at the University of Santo Tomas (UST), where Mallari has been applied to take accountancy, would start in August.

“It is of judicial notice that the [University of Sto. Tomas] starts its classes for the first semester anytime within the month of August 2015.”

“In this regard and considering that time of the essence, this court reiterates its order that SNPS should issue a Certificate of Good Moral Character in favor of Krisel immediately upon receipt of this resolution,” the appeals court said.

In March, a video that went viral on social media showed Mallari delivering her salutatory speech and being stopped by school officials. In the speech, she criticize the “dirty and dubious” system at SNPS.
She later told media that her speech would have touched on alleged irregularities in the computation of her grades. The school denied her claim and accused her and her father of being difficult.

The school later refused to issue the CGMC arguing that it was not required by law to issue the certification.

However, a CGMC is a requirement for incoming college freshmen.
“Without a certificate of good moral character from my high school, I cannot enroll. Hence, private respondents’ continued unjustified refusal to issue the said certificate would result to denial of my application to UST and forfeiture of my reserved slot in its accountancy program. It will put my education to halt and my future in jeopardy,” said Krisel via the petition.

The appeals court said Mallari, a minor, was only expressing her views and opinions.

“[She] should not be punished arbitrarily for exercising her right to freedom of expression,” the appeals court said.

“Krisel, just like any other child, commits transgressions and therefore, must be disciplined. However, the manner by which she is disciplined should not go to the extent of spoiling or destroying her dreams and aspirations.”

“Krisel’s welfare is of paramount interest and of primordial consideration and the state is mandated to act on her behalf to ensure that her rights are protected and her dreams and hopes are not put to waste,” the appeals court further said.

The appeals court ruling was concurred in by Associate Justices Remedios Salazar-Fernando and Priscilla Baltazar-Padilla.