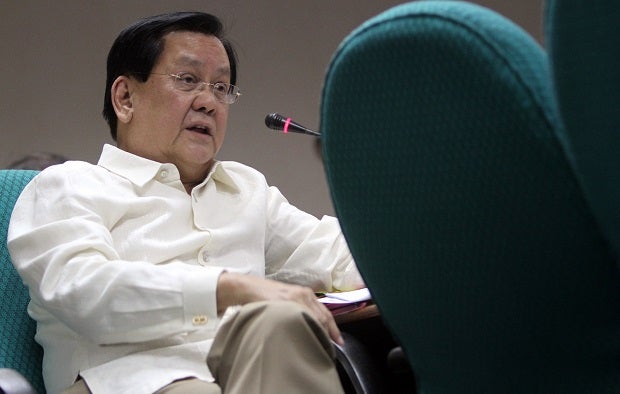 Pork for members of Congress is back, with senators allocated at least P200 million.

Senators have the right to identify projects amounting to P200 million each in the 2015 budget but some senators have projects worth P2 billion, Sen. Serge Osmeña III said on Tuesday.

Asked how much pork barrel was allocated to senators in the 2015 General Appropriations Act (GAA), Osmeña said, “Well, I think they have the right to identify up to P200 million.”

He said the amount could still go up. “There are those with P1 billion. Others have P2 billion … Just don’t ask me to identify anymore.”

Osmeña said Malacañang had promised Congress that it could still identify projects placed in the budgets of different agencies.

He confirmed Sen. Panfilo Lacson’s findings that lump-sum or discretionary funds, which are prone to corruption, can still be found in this year’s national budget.

How to control Congress

Osmeña said lump-sum funds would also be found in the Malacañang-proposed P3.002 trillion for the 2016 national budget.

“If there’s no pork, [the President’s] pet bills won’t be passed in Congress,” he said. “That is how the President controls Congress.”

Speaking before accountants on Monday, Lacson said he and his team found P424 billion worth of lump-sum appropriations or discretionary funds “parked” in the budgets of 11 of the 21 major line agencies of the national government, including the Department of Social Welfare and Development (DSWD).

The former senator said the lump-sum appropriations could be higher because his team had not yet completed its review of the budget.

Lacson said he would go to the Supreme Court to question the lump-sum items in the national budget. The Supreme Court declared the Priority Development Assistance Fund (PDAF) unconstitutional in November 2013.

PDAF, a lump-sum budgetary item and a pork barrel, is a source of kickbacks of lawmakers, who identify pet projects to be financed by their PDAF allocation.

Lacson said the government lost P10 billion in the scam allegedly perpetrated by businesswomen Janet Lim-Napoles with the connivance of lawmakers misusing their PDAF allocations.

The high court made the ruling after groups questioned the use of PDAF following the discovery of the scam.

Three senators—Juan Ponce Enrile, Jinggoy Estrada and Bong Revilla—are detained and are standing trial on plunder charges in connection with allegedly pocketing tens of millions of pesos from their PDAF. Other lawmakers involved in the PDAF scam have been charged with plunder.

Before the high court declared PDAF illegal, a member of the House of Representatives was allocated P70 million, and a senator, P200 million.

“They violated the Supreme Court ruling by not itemizing it in the budget. It should be itemized,” Osmeña said, referring to Congress and the Department of Budget and Management (DBM).

Osmeña said he had not accepted any “candy” in this year’s budget.

Senate President Franklin Drilon said he had not made any insertions in the 2015 national budget.

“One thing I can tell you. I don’t have a single lump-sum insertion and I have not inserted anything in the budget that I have nominated. None. Not a single peso,” said Drilon, who claimed he had not examined the budget as exhaustively as Lacson had done.

The Senate President told the Inquirer he had not made any appropriation for his pet project, the school building program, and thus, this had “completely stopped.”

“I was conscious of that,” he added, apparently referring to the high court ruling that declared the PDAF unconstitutional.

Drilon said Sen. Francis Escudero, chair of the Senate finance committee, should respond to Lacson whether there were insertions from senators.

Escudero said on Tuesday that the lump-sum funds were “temporary and with safeguards.” He added that the funds could not be used unless an itemized listing was submitted.

Lacson said he was not surprised to hear Osmeña’s statement that senators could identify projects worth at least P200 million.

The former senator noted that this was the practice before and that “enterprising” senators could get realignments as much as over P1 billion.

“Even during my time (as a senator), I know of at least one senator who got P1.6 billion in one fiscal year and another P1.8 billion in the next budget year,” Lacson, who had rejected the use of pork barrel funds all throughout his stint in the Senate, said in a phone interview.

He disagreed with Escudero’s explanation that the lump-sum funds were temporary, saying that “it’s either line budget item or lump sum.”

“If it’s lump sum, it is discretionary and prone to misuse, abuse and corruption. Lump sums are not illegal per se but if these, as described in the National Executive Program, are converted into PDAF … then it’s not only illegal but unconstitutional,” Lacson said.

The former senator said he and his team would file in the Supreme Court a petition of prohibition on certain provisions of the 2015 national budget.

“We will question certain provisions of the 2015 GAA, not the entire national budget,” he said.

These included Sections 70 and 73 under the General Provisions of the 2015 GAA, which he earlier said was the “obvious reincarnation” of Budget Circular No. 541.

Lacson said the circular had authorized the DBM to pool savings and declare them unobligated, unutilized and unreleased appropriations in the second quarter of the year.

These funds were then called the Disbursement Acceleration Program that was meant to pump-prime government spending, but like PDAF, some parts of it were declared unconstitutional by the high court.

Lacson said his team was continuing to determine whether pork barrel funds were embedded in other major line agencies and might file a supplemental petition on this in the Supreme Court.

No lump sums for DSWD

Social Welfare Secretary Corazon Soliman denied that the P102 billion in the department’s budget for 2015 represented discretionary or lump-sum funds.

Soliman said the P102 billion represented the DSWD budget for maintenance and other operating expenses (MOOE).

“The DSWD has no lump sum or discretionary funds amounting to P102.6 billion in the 2015 General Appropriations Act. How can that be when the budget of the department is already P107.8 billon?” she said in a statement Wednesday.

“We do have a budget for maintenance and other operating expenses (MOOE) amounting to P102 billion,” she added.

MOOE, which refers to expenses to support an agency’s operations such as expenses for supplies and utilities for various programs and projects, took the lion’s share of the DSWD budget, more than what was allocated for personnel services (or salaries and wages of all DSWD employees), financial expenses and capital outlay.

In terms of programs, activities and projects, however, Soliman said the DSWD budget could be broken down into P86 billion for operations, P980.68 million for general administration and support, P265.75 million for support for operations and P20 billion in locally funded and foreign-assisted projects.

‘Nothing illegal’ in lump sums in 2015 budget, says Escudero