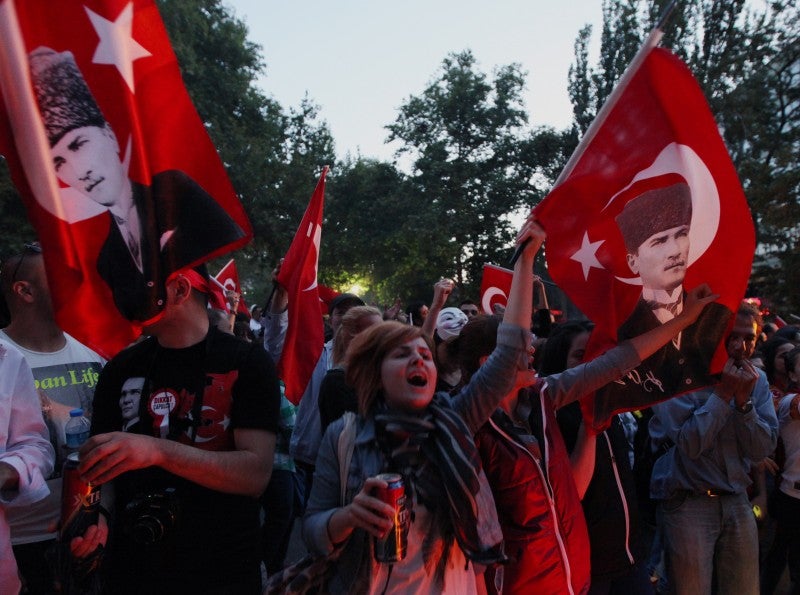 Turkish protesters wave national flags with portraits of Turkey’s founder Kemal Ataturk as they take part in a demonstration in Ankara. In a separate demonstration, Turks protesting China’s treatment of Uighur Muslims attacked a group of Koreans whom they mistook as Chinese. AP FILE

Hundreds of angry protesters marched towards the Topkapi Palace on the banks of the Bosphorus Strait in a show of solidarity with the Turkic Uigurs, who complain of cultural and religious suppression under Chinese rule.

Shouting “Allahu Akbar” (God is the Greatest), they attacked some Koreans outside the Topkapi Palace, which is visited by thousands of tourists every day.

The tourists were rescued by riot police, who fired tear gas to disperse the attackers, members of the notorious far-right Grey Wolves closely affiliated with Nationalist Movement Party (MHP).

The incident came amid a row between Ankara and Beijing over Turkish media reports of restrictions on Muslim Uighurs worshipping and fasting during the holy month of Ramadan.

Turkey this week summoned the Chinese ambassador to convey its concern over the alleged restrictions. Beijing in turn denied the allegations and demanded that Turkey clarify its statements.

A total of 173 Uighurs arrived in Turkey from Thailand on Tuesday where they were being held after fleeing China. Beijing expressed displeasure with Turkey on Friday for accepting the group.

Over the last week hundreds of Turkish nationalists across the country have demonstrated to protest China’s alleged Ramadan bans.

A popular Chinese restaurant in Istanbul was attacked on Wednesday and had its windows smashed by a group protesters who did not realize it was Turkish-owned and that its chef was an ethnic Uighur.

A predominantly Muslim country, Turkey shares linguistic and religious links with the Uighur community, which has several associations here.

Read Next
6 flights cancelled due to ‘Egay’
EDITORS' PICK
What to watch out for when selecting a video surveillance solution
Heads may roll at BOC, says Palace if sugar smugglers are allowed to use recycled import permits
vivo brings to the Philippines a powerful smartphone with a slimmer body, the vivo Y02s for only PHP 6,499
DOH reports increase in daily COVID-19 deaths, mostly unvaxxed
Palace: Biggest supermarkets in PH commit to sell sugar at P70 per kilo
House energy committee chair Arroyo bats for cheap electricity
MOST READ
DepEd to give teachers P5K cash allowance within first week of classes
Alyssa Valdez to miss Creamline’s AVC Cup campaign
DOJ indicts bank officer in $2.1 billion Wirecard fiasco
GSIS cool to idea of lowering retirement age in PH
Don't miss out on the latest news and information.