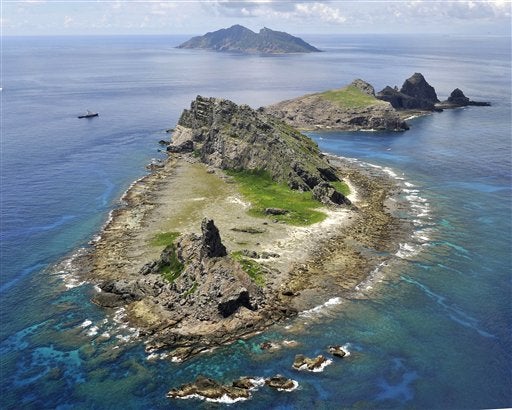 In this Sept. 2, 2012 file photo, the survey ship Koyo Maru, left, chartered by Tokyo Metropolitan Government officials, sails around Minamikojima, foreground, Kitakojima, middle right, and Uotsuri, background, the tiny islands in the East China Sea, called Senkaku in Japanese and Diaoyu in Chinese. Rising tensions in disputed territories are seen as a reason for Japan joining war games between the US and Australia. AP

SYDNEY, Australia – The United States and Australia kicked off a massive joint biennial military exercise on Sunday, with Japan taking part for the first time as tensions with China over territorial rows loom over the drills.

The two-week “Talisman Sabre” exercise in the Northern Territory and Queensland state involves 30,000 personnel from the US and Australia practicing operations at sea, in the air and on land.

Some 40 personnel from Japan’s army — the Ground Self-Defense Force (JGSDF) — will join the American contingent, while more than 500 troops from New Zealand are also involved in the exercise, which concludes on July 21.

“It is a very, very important alliance,” Prime Minister Tony Abbott said Friday in Sydney on board the USS Blue Ridge, which is taking part in the exercise, referring to Australia-US ties.

“It’s a very important relationship and right now we are facing quite significant challenges in many parts of the world but particularly in the Middle East.”

The war games, being held for the sixth time, come as China flexes its strategic and economic muscle in the region.

Beijing has been building artificial islands and facilities in disputed waters in the South China Sea, and has a separate territorial dispute with Japan over the Tokyo-controlled Senkaku islands — which it calls the Diaoyus — in the East China Sea.

“There’s subtle message going out that at every level — from hardware to technical and strategic expertise and cooperation — the main American allies and America are working very closely together largely to account for China,” John Lee, a China specialist at the University of Sydney, told AFP.

“It’s definitely linked to the notion that China is becoming more assertive and that it seems to be putting money into military capabilities to back up its assertiveness in the South China Sea in particular.”

Beijing rejected US criticism of its reclamation works in the South China Sea during the annual Shangri-La Dialogue meeting in May, saying it was just exercising its sovereignty.

The US has been pursuing a foreign policy “pivot” towards Asia, which has rattled China, and is rotating Marines through northern Australia — a move announced by President Barack Obama in 2011.

While Beijing would not be pleased with Japan’s involvement in the drills, it would also not be surprised, experts said.

Australia has stepped up its relationship with Japan in recent years and last July Abbott described his counterpart Shinzo Abe as “a very, very close friend” during a state visit to Canberra.

The Australian government is also considering buying Soryu-class submarines from Japan, which Lee said would be fully integrated with US weapons systems.

“It’s a continuation of a deepening security relationship between Australia and Japan,” Andrew Davies, a senior defense capability analyst at the Australian Strategic Policy Institute, told AFP of Japan’s inclusion in the exercise.

“It’s been a work in progress for at least a decade now and it’s gathering pace, and Australia and Japan are looking for opportunities to do things together in the military space.”

At the same time, the US’s regional strategic relationships were evolving even before China’s recent actions, with a shift away from bilateral pacts towards multilateral alliances, Davies said.

America’s other allies — such as Singapore, Malaysia, India, Vietnam and the Philippines — would be supportive of the exercise, as well as Australia and Japan’s activities in the region, Lee added.

“Undoubtedly it would be received very well because all the other countries are desperately hoping that America and capable allies can actually work together to counter China,” he said.