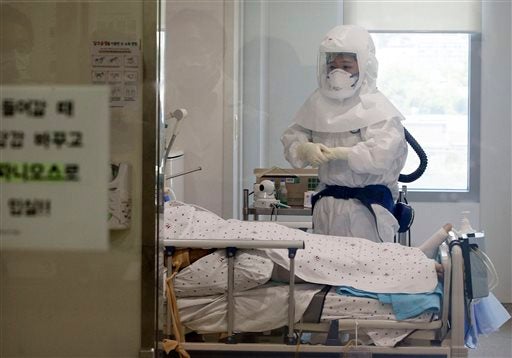 A health care worker wearing protective gear as a precaution against the MERS virus tends a MERS patient inside an isolation ward at Seoul Medical Center in Seoul, South Korea. AP FILE PHOTO

SEOUL, South Korea— South Korea said Thursday that 23 people have died and more than 6,700 are isolated at homes and medical facilities as officials continue their efforts to put the Middle East respiratory syndrome (Mers) outbreak under control.

More than 160 have been diagnosed with Mers nearly a month after the outbreak originated from a 68-year-old man who had traveled to the Middle East, according to Seoul’s Health Ministry.

Officials say that the outbreak has already peaked and could be defused by the end of the month. But the continued discovery of new cases among people who managed to slip through the quarantine measures has casted doubts on such optimism and raised questions about the government’s ability to control the situation.

Critics, including Seoul Mayor Park Won-soon, have blamed government officials for accelerating the spread of the Mers virus by failing to enforce tight control measures at Seoul’s Samsung Medical Center, which was belatedly shut down over the weekend after it continued to be the main source of the infections.

Dozens of patients, medical staff and visitors have been infected with the Mers virus at the hospital, one of the country’s biggest, and they are believed to have contacted hundreds of other people before their conditions were confirmed. The sheer size of the exposure at the hospital suggests there is a possibility the country could see another large wave of infections, according to Jacob Lee from the infectious disease department at Seoul’s Kangnam Sacred Heart Hospital.