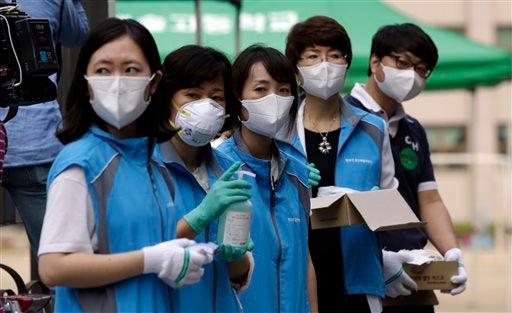 SEOUL, South Korea — South Korea’s outbreak of the deadly MERS virus is “large and complex” and more cases should be expected, a team of World Health Organization (WHO) experts said Saturday.

WHO and South Korean health authorities have conducted a joint mission to review the outbreak of Middle East Respiratory Syndrome (MERS), the largest outside Saudi Arabia.

The outbreak in South Korea has been spreading at an unusually fast pace, with 138 confirmed infections as of Saturday, with the country’s first case diagnosed on May 20.

South Korea on Saturday reported the 14th death from the disease and 12 new cases, including that of an ambulance driver who transported a patient infected with the deadly virus.

“Now the outbreak has been large and is complex, more cases should be anticipated”, WHO Assistant Director-General for Health Security Keiji Fukuda told journalists.

“And because of this, the government should remain vigilant and should continue its intensified disease surveillance and prevention measures until the outbreak is clearly over.”

But he praised South Korean authorities for their strong tracing, monitoring and quarantine measures, backed by expanded laboratory diagnostic testing.

Fukuda said there was a “great deal of anxiety” among Koreans over the outbreak, particularly over whether the virus has mutated to make human-to-human transmission easier.

“Based on available sequencing studies of the genetics of the virus, we do not see any changes that appear to have made the virus itself more transmissible,” Fukuda said.

The outbreak is showing epidemiological patterns similar to the one occurring in hospitals in the Middle East, he said.

At present, the mission has found no evidence to indicate that there are ongoing transmissions of the virus in communities outside hospitals in South Korea, he added.

The joint mission has identified some reasons to explain why the virus has infected a “large number of people in a relatively short period of time” in this country, Fukuda said.

The virus was unfamiliar to most Koreans, making doctors less likely to suspect the MERS virus as a potential cause of infection when diagnosing respiratory illnesses.

“Infection prevention and control measures were not optimal” in some hospitals, with overcrowded emergency rooms and many patients sharing a single hospital room, thus creating an environment for the virus to spread easily, he said.

South Koreans’ habit of “doctor shopping” — seeking care at many different medical facilities — and the custom of having many friends and family members visit hospitalised patients may have contributed to the secondary spread of the infection, he added.

He recommended the continued enforcement of basic public health measures to stop further cases from spreading and urged infected people or those who have had contact with them not to travel.

The Health Ministry said on Saturday all the 14 killed by the virus had pre-existing health conditions, with the most recent fatality suffering from hypertension and hypothyroidism.

The latest fatality was a 68-year-old woman who contracted the virus at a hospital in Pyeongtaek City, 65 kilometres (40 miles) south of Seoul.

The new confirmed cases included an ambulance driver who fell ill after transporting a 75-year-old infected woman to Samsung Medical Centre in southern Seoul on June 7, where she died three days later.

Out of 133 people whose contact with infected patients have been traced, the largest single group of 60 contracted the disease at Samsung Medical Centre, one of the largest hospitals in Seoul.

Five other cases are being investigated to find out how and where the patients were infected.

The first infected patient in South Korea was diagnosed on May 20 after a trip to Saudi Arabia.

The 68-year-old man visited four medical facilities, infecting other patients and medics, before he was finally diagnosed.