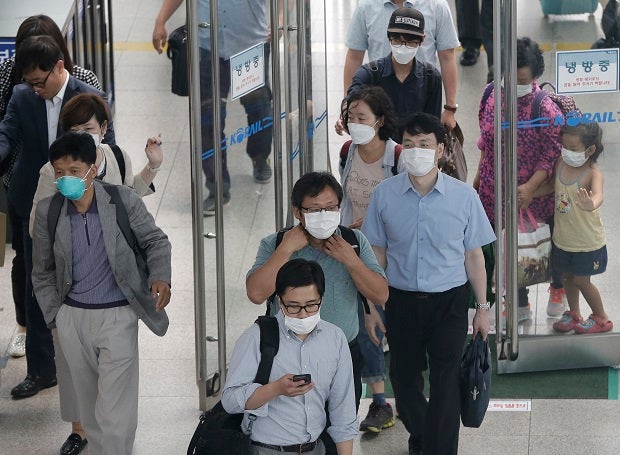 People wear masks as a precaution against MERS (Middle East Respiratory Syndrome) as they arrive at Seoul Railway Station in Seoul, South Korea, Tuesday, June 16, 2015. The death toll continued to mount in South Korea’s MERS outbreak on Tuesday even as schools reopen and people recover from the virus. AP

SEOUL, South Korea – South Korea announced its 20th death from the MERS virus Wednesday as criticism grew over authorities’ ability to contain the outbreak, with alarming reports of new cases slipping through a quarantine that already affects thousands.

A 54-year-old woman died of Middle East Respiratory Syndrome Wednesday morning, about two weeks after being diagnosed on June 5, the health ministry said.

It also reported eight new patients — including four who had been infected in Samsung Medical Centre in Seoul, considered the epicentre of the outbreak — a day after the ministry said it was cautiously optimistic that the worst was over as the number of new cases appeared to be falling.

Almost all infections so far have been limited within hospitals.