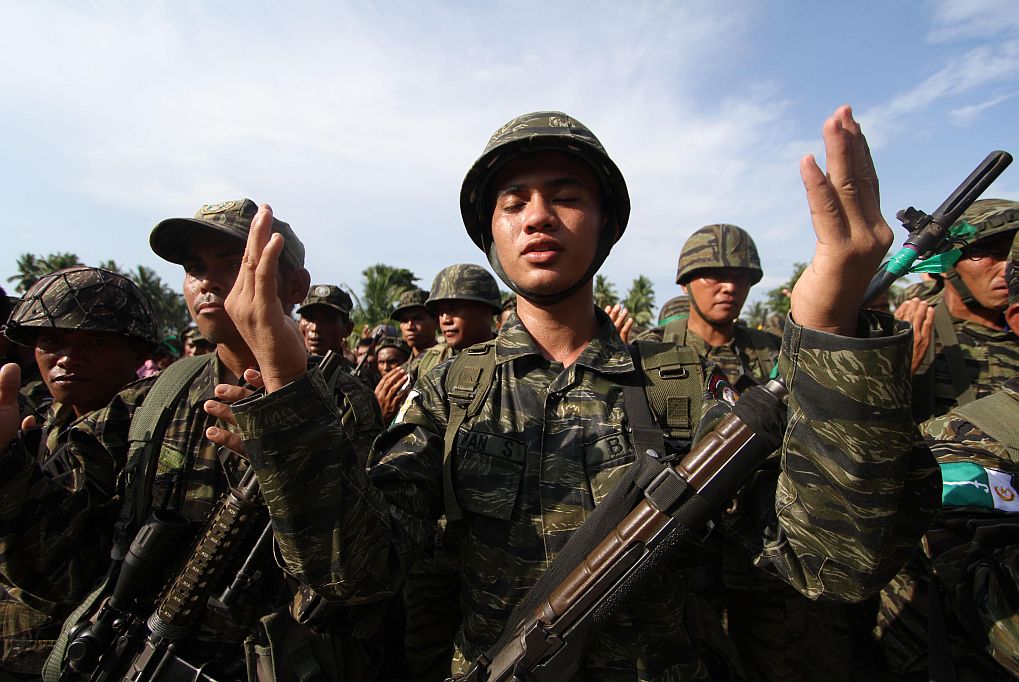 COTABATO CITY – Amid uncertainties in the passage of the draft Bangsamoro Basic Law, the Moro Islamic Liberation Front will push through with the decommissioning of its weapons and forces starting June 16, a senior rebel official said.

READ: Marcos: BBL will lead us to perdition

“This shows the continued commitment of the Parties to bring peace” even as the Bangsamoro Basic Law is still being deliberated in both chambers of Congress,” Ferrer said in a statement.

She said the Phase 1 of the process will begin with the ceremonial turnover of 55 high-powered and 20 crew-served weapons, and the decommissioning of 145 members of the MILF’s Bangsamoro Islamic Armed Forces.

Crew-served weapons were described as weapon systems that require more than one individual for it to function at optimum efficiency, such as medium and heavy machine guns.

However, the final venue of the ceremonial decommissioning, which is part of the Annex on Normalization, has not been finalized yet.

The Task Force on Decommissioned Combatants and Communities will also provide them medium- to long-term socio-economic interventions.

“The President himself will be the guest of honor during the event and we are inviting our esteemed lawmakers from the House of Representatives and the Senate to join us and witness the commitment of both Parties to put an end to the armed conflict,” Ferrer said.

When the Moro National Liberation Front (MNLF) signed a peace agreement in 1996, its forces were never disarmed.

Governor Mujiv Hataman of the Autonomous Region in Muslim Mindanao (ARMM) said for centuries, the Moro people had strived for self-determination and that members of both Houses of Congress should appreciate in that respect, the need to establish a Bangsamoro government in the nature of real autonomy.

“Just how the Filipinos fought to assert the cost of freedom; the Moro people feel the same way,” Hataman said in an interview with the Inquirer Thursday.

But Hataman admitted “mistrust” as basis fears an autonomous Bangsamoro government was a step toward secession, may not be entirely baseless.

So that the challenge, Hataman said, to contemporary Muslims was to fight that sense of “mistrust,” by proving trustworthiness, because Islam teaches that “changes for the better lies in individual struggle in pursuit of excellence, if not perfection.”

He also allayed fears that a Bangsamoro government was about preference of religion in ways of governance and recruitment or selection of employees.

Hataman said some of ARMM’s best performing employees are Christians, working hand-in-hand with their Muslim colleagues in achieving for the region certain national and international standards of clientele services.

He expressed hope Congress would be able to pass the Bangsamoro Basic Law (BBL) in October.

Hataman also said the ARMM experience also showed that the Moro people could govern. He cited as one example the recent awarding of the seal of Good Governance Condition (GGC) to the ARMM, its first in its 25 years of existence.